RICE LAKE, WI – Henry Repeating Arms is proud to announce a continuation of their title sponsorship for the NASCAR Xfinity Series race held at Road America in Elkhart Lake, Wisconsin. This year’s Henry 180 will see the green flag wave on July 3rd, followed by a NASCAR Cup Series race at the same track on July 4th. NBC will be televising the Henry 180 live at 1:30 PM (CT).

At both ends of a lengthy lightning delay, last year’s event offered plenty of edge-of-your-seat racing with wet conditions that made the notoriously difficult road course even trickier for the budding stock car drivers. The Henry Repeating Arms #98 Ford Mustang, driven by Chase Briscoe, finished running in 3rd position. Drivers will be aiming for unique trophies for the 2021 race, with both the pole qualifying and race winners set to receive custom-built Henry 180 edition lever-action rifles. 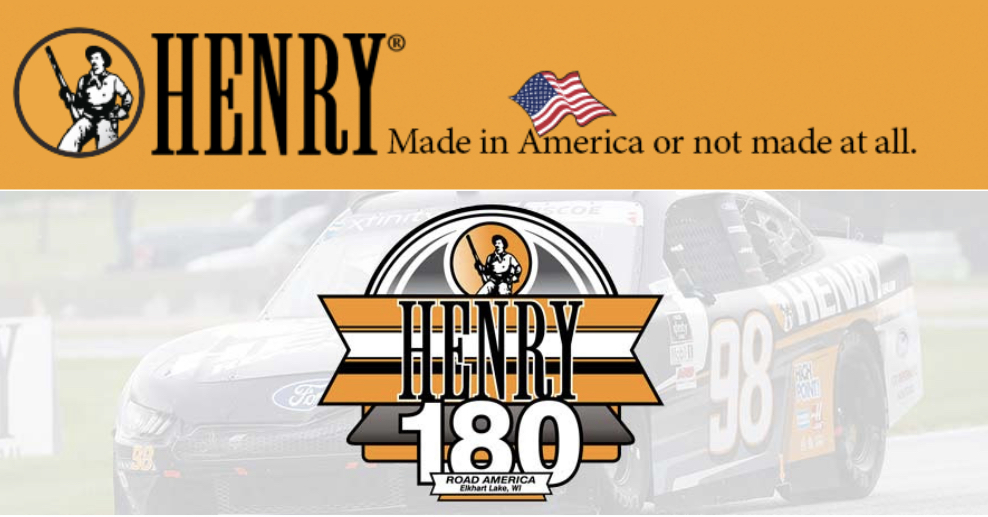 “Returning to our home track in Wisconsin is something that we are very much looking forward to, and this year will be even more special since the races take place during the July 4th weekend,” says Henry Repeating Arms President and owner, Anthony Imperato. “It’s going to be a fun, patriotic weekend, and we can’t wait to see our fans and make some new ones at the track.”

“We’re thrilled to welcome our friends at Henry Repeating Arms back for what is assuredly going to be another great race this year,” said Road America President and General Manager, Mike Kertscher. “We couldn’t ask for a better partner to share July 4th weekend with, and we look forward to bringing all of the excitement of a NASCAR doubleheader to our fans.”

Full fan attendance is anticipated for the race, and tickets are now available by visiting www.roadamerica.com or by calling 800-365-7223. Anyone 16-years-old and under is FREE with a paying adult at the gate. The Henry 180 will take place rain or shine.

Henry firearms are purchased only through a licensed firearms dealer. For more information about Henry Repeating Arms and its products, visit henryusa.com or call 866-200-2354.

Henry Repeating Arms is one of the leading rifle and shotgun manufacturers in the United States and a world leader in the lever action category. The company motto is “Made in America, or not made at all” and its firearms come with a lifetime guarantee backed by award-winning customer service. The company is also known for its charitable endeavors under its Guns For Great Causes program, which focuses on sick children, both individual cases and children’s hospitals, veteran and wounded veteran organizations, Second Amendment and wildlife conservation organizations. The company currently employs 535 people and has 250,000 square-feet of manufacturing space in its Rice Lake, Wisconsin and Bayonne, New Jersey facilities. The company is named in honor of Benjamin Tyler Henry who invented and patented the Henry rifle in 1860 – the first repeating rifle, the lever action rifle, which is America’s unique contribution to international firearms design and is one of the most legendary, respected and sought-after rifles in the history of firearms. Visit Henry Repeating Arms online at www.HenryUSA.com, on Facebook at www.Facebook.com/HenryRepeating, and on Instagram @Henry_Rifles.