You are at Home Gear Surefire releases UBR Invictus 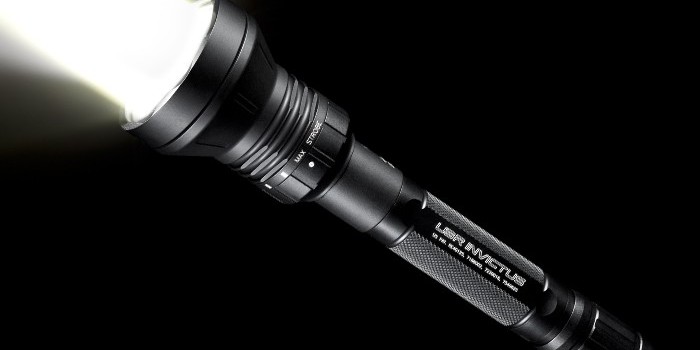 Surefire announced today on it’s Facebook page the 800 Lumen UBR Invictus is now available to be purchased. The Invictus sounds like it is one bright flashlight but those 800 Lumen’s will cost you about $692.00 MSRP. While I’d love to lay my hands on one of these at that price it may be awhile before I’m sporting Surefires new Invictus.

If get one and have had experiences with it let us know in the comments!

UBR-A-BK
The UBR Invictus is a rechargeable ultra-high-output LED flashlight with selectable light levels, strobe and SOS modes, and the ability to run on either the included rechargeable lithium-ion battery or two 123A lithium batteries using the included battery magazine. At maximum output the UBR generates 800 lumens of brilliant white light focused by a precision Turbohead TIR lens into a high-intensity, far-reaching beam suitable for spotlight/searchlight applications, yet still providing significant peripheral illumination. The UBR’s selector ring has eleven settings — with eight levels of light from 5 to 800 lumens, a strobe mode, an SOS beacon mode, and a disable setting to prevent accidental activation during transport, storage, or stealth ops.

The UBR also features a 3-color LED indicator (“fuel-gauge”) that tells you the battery-charge level.

Charging is easy: connect the charger to a 120V outlet, or into a 12-volt cigarette lighter/accessory socket when using the DC adapter, then plug the charging cord into the UBR’s charging socket—no removing the battery and no special charging cradle needed.

Constructed from rugged aerospace aluminum and finished in Mil-Spec hard anodizing for extreme durability, the UBR Invictus is O-ring and gasket sealed to keep out dust and moisture.

The predecessor of the UBR Invictus, the UB3T Invictus, has most of the same features but is non-rechargeable and is powered by three 123A batteries.

Another ultra high-output rechargeable flashlight with similar features is the UNR Commander.