You are at Home Firearms Which Are the Best Guns for Home-Defense?

Which Are the Best Guns for Home-Defense?

“Which are the best guns for home defense?” As a firearms instructor and military veteran, I hear that question all the time. Many of you have probably asked this question, or a variation of it, as well.

As always, I feel the need to include a disclaimer: Everyone has lots of opinions. Some opinions are good, and some opinions are… I’ll be kind, not as good. Oftentimes, you might even find that people screaming the loudest have the least experience. This is especially true in today’s world of hyper-sensationalized social media.

For what is worth, here are my thoughts on the best guns for home defense.

As civilians, home defense is one of the few likely scenarios in which we need to use a gun in our daily lives. There are three basic schools of thought when it comes to which guns are better for home defense. These are the shotgun, rifle, or pistol schools.

However, each option has its pros and cons. I like to refer to them as trade-offs. What does this mean? It means there are several things to consider. Just like in any tactical scenario or tactical environment, the trade-offs matter.

All guns will kill someone, that is, after all, the point. For home defense, the trade-offs are what matter the most

Over the years, one of the most common recommendations for home defense guns was a shotgun. Probably a 20- or 12-gauge shotgun, with 00 buck as the shotshell. You hardly have to aim, right? That big ol’ shotgun just scatters tons of pellets in the general direction you aim and increases the chances of a good hit. Done.

If we drill down on that a little bit more, a three-inch shotgun shell with 00 buckshot is basically like packing 12-15 little steel ball bearings, about eight or 9mms in diameter, into one shot. In other words, it’s almost like getting shot with 10-15 bullets at the same time. Uh, no thank you, very much. 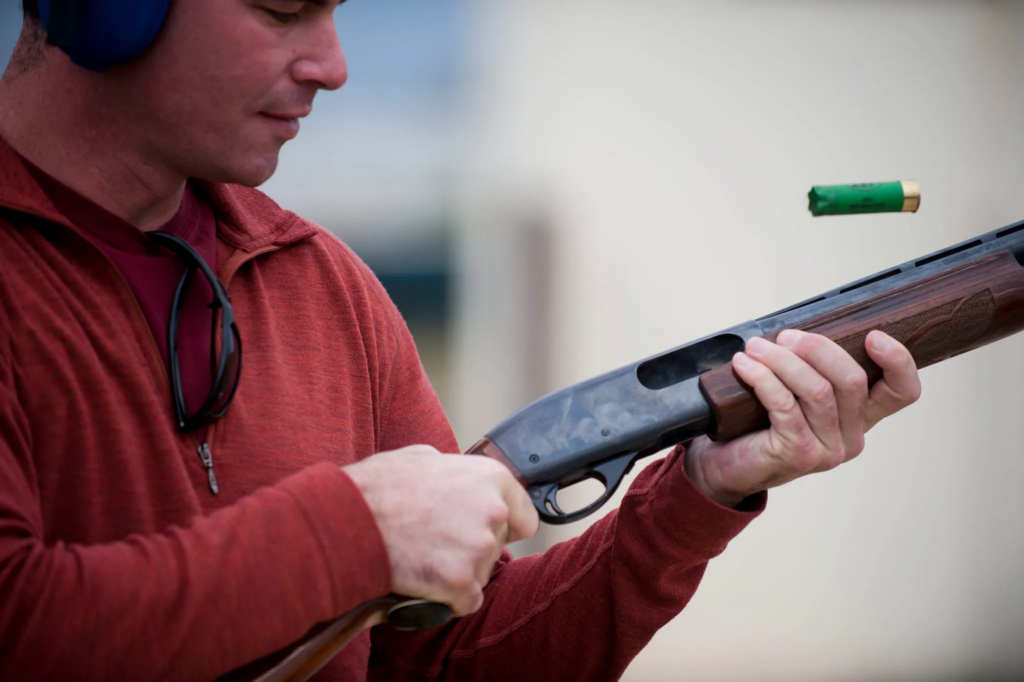 At the expense of sounding morbid, that’s why it’s possible to cut a person nearly in half with a shotgun blast to the torso, at a somewhat close range. It’s partly why the government banned short-barreled, or “sawed-off” shotguns back in the gangster days of the 1930s. The shorter the shotgun barrel, the faster those pellets or buckshot spread out once they leave the barrel. Anything less than 18″ is illegal or needs to be registered.

One major disadvantage of shotguns is that they are hard to shoot since they have a ton of recoil. If that buttstock is not seated properly on your shoulder, it will feel like getting kicked by a horse. Not everyone enjoys shooting a shotgun. Especially beginners, some women, or people with smaller frames.

Additionally, it has often been assumed that because shotguns have a shorter range and the pellets lose velocity quickly, they don’t penetrate walls. This is not always true. Shotguns, contrary to popular belief, can penetrate layers of sheetrock or walls. This is true, especially at close range.

What About a Rifle or Carbine as Home-Defense Guns?

When you bring a gun to a gunfight, a rifle or a carbine is the gun to bring. ARs, for example, carry more ammo than shotguns or pistols. That is an obvious plus. They are easier to shoot accurately under stress and have little recoil. A rifle or carbine brings a lot of added stability and accuracy. 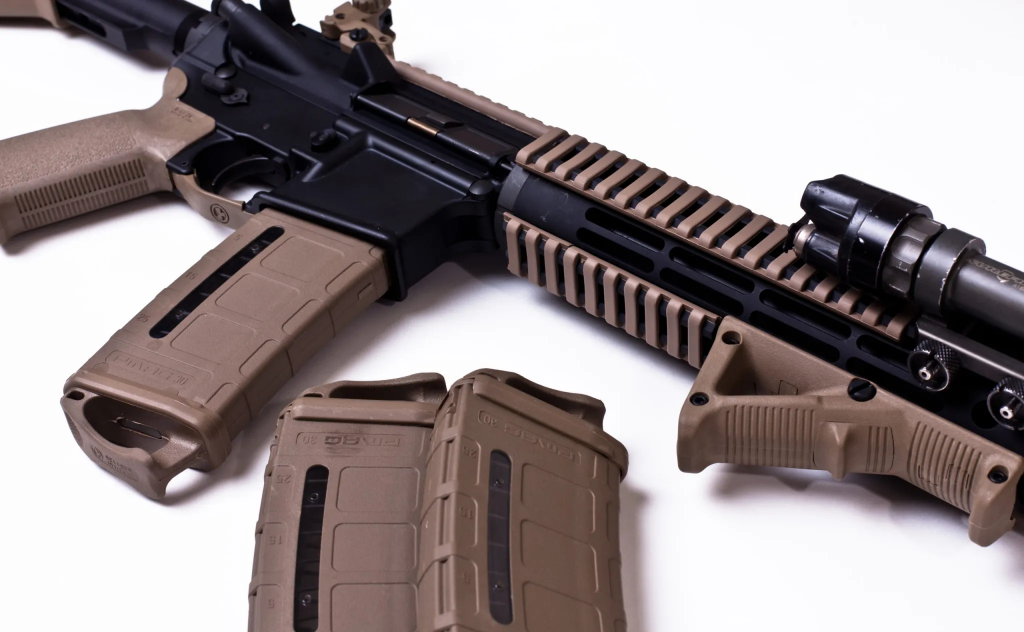 Lately, with social media influencers in the veteran and gun space, and the proliferation of AR-15 options, we see more and more people recommend ARs as the best guns for home defense.

While many of these dudes have more real-world tactical experience than I do, I do not share this opinion. This is because of two words: bullet penetration.

Besides that, they are longer so trickier to use in closed spaces like inside a house with narrow halls and doorways. Those bullets are going to over-penetrate, and depending on any number of factors, you might not be able to control where they go. Right off the bat, it seems the trade-offs are not the best. The pros will not always outweigh the cons.

And What About Pistols?

A pistol is also an option for home defense. They are small, compact, relatively easy to shoot (easier than a shotgun, for example), and are made for close range. Makes sense, right? Pistol caliber bullets tend to be less powerful — although often larger in diameter than a rifle bullet — because there is simply less power pushing that bullet out of the gun. However, the guns’ shorter barrels and smaller sizes make them easier to maneuver inside a building or a home. 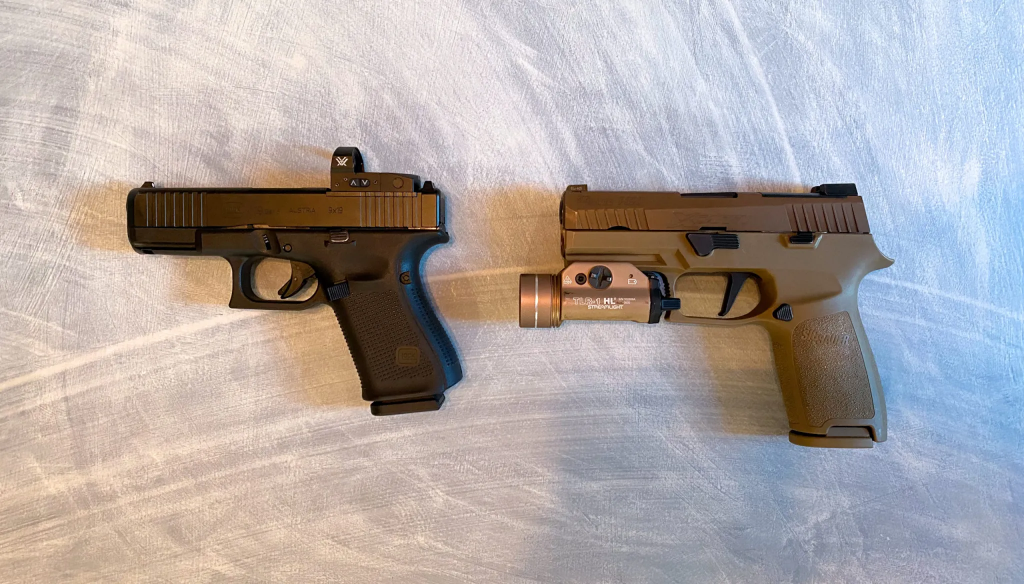 Even better, a pistol with hollow-point ammo is the least likely to over-penetrate the bad guy. Hollow-point bullets usually stay inside the bad guy, as they are designed to do, therefore causing more internal damage. The idea of self-defense is to stop the bad guy as soon as possible, right? Without hurting anyone else, of course.

In this case, what makes pistols less powerful than a shotgun or rifle makes them ideal for home defense. After all, the last thing you want is for the bullet to go through the bad guy and then land somewhere else in the house. In tight quarters, like a house where there might be bedrooms or other rooms on the other side of a wall disregarding bullet penetration is very risky.

Now, this is the part where I connect everything together.

The Best Home Defense Gun Is a ‘Hybrid’ Option

Let’s take the best of both worlds and then combine them into one, solid home-defense platform.

Given that pistols tend to be the best type of guns for the home, let’s significantly level them up to an even better platform: a pistol-caliber carbine. Specifically, something along the lines of an AR-9. More to the point, an AR-9 with an 8-10″ barrel for better velocity and expansion on a hollow point round. Add a red-dot optic, sling, and gun light, and you are all set.

There are several good options out there at various price points. The Palmetto State Armory AR-9, the Sig MPX PCC, and the CZ Evo are just to name a few.

An AR-9 is simply an AR carbine with a pistol-caliber bullet. If we were to use hollow-point bullets in this AR-9, we now have the best home defense gun option available. It comes with the benefits of a pistol and rifle all in the same package.

Are You Prepared for the Possible Scenario of Home Defense?

If you ever find yourself in a home-invasion scenario, I promise you — from experience — it will catch you off guard. No matter how vigilant one is at home, it’s not something you are always thinking about. You can’t. And you shouldn’t.

Our homes are our safe places, our family and friends’ place, and where we keep the world out. But when the world comes in, you need to be able to act — and act quickly and decisively. You will be nervous. Your heart will feel like it’s going to pound through your chest. You will feel the adrenaline and your breathing will increase. Your hands might get sweaty and your aim less steady. So you will need every advantage you can get.

A carbine platform will give you back every advantage, and then some.

You’ve probably heard the saying: if you find yourself in a fair fight, your tactics suck. In this kind of fight, you want every advantage possible. A short-barreled, pistol-caliber carbine will definitely provide you every advantage possible.Dustin is a 12-year US Army Veteran, having served a mix of reserve and active-duty time. In Afghanistan, he served as an Infantry Advisor and Embedded Tactical Trainer (ETT) to the Afghan National Army (ANA), where he was operationally attached to the 3rd Special Forces Group. He is a recipient of the Bronze Star. He has a Master of Arts in International Relations and National Security. He is a certified civilian firearms instructor and competitive shooter in the IDPA. Dustin instructs on defensive and tactical pistol and carbine.

Dustin is a 12-year US Army Veteran, having served a mix of reserve and active-duty time. In Afghanistan, he served as an Infantry Advisor and Embedded Tactical Trainer (ETT) to the Afghan National Army (ANA), where he was operationally attached to the 3rd Special Forces Group. He is a recipient of the Bronze Star. He has a Master of Arts in International Relations and National Security. He is a certified civilian firearms instructor and competitive shooter in the IDPA. Dustin instructs on defensive and tactical pistol and carbine.