A FAMILIAR PLANT WITH A NEW NAME

A FAMILIAR PLANT WITH A NEW NAME

[Nyerges is an educator and the author of numerous books about the uses of wild plants.  More information can be had at www.SchoolofSelf-Reliance.com)

Everyone in the West who studies wild plants – from Alaska to Baja – knows the plant commonly called Miner’s Lettuce.  This plant is so distinctive  that a botanical amateur can readily recognize it.  The flower stalk develops a double leaf which looks like a cup, out of which the delicate flowers arise.  It is very easy to recognize once in flower. 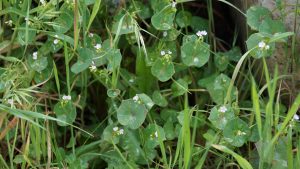 A cluster of Indian lettuce. Photo by Rick Adams.

This was one of the very first wild foods that I learned to identify and use for food when I began my ethnobotanical studies in the early 1970s.

The plant – known as Claytonia perfoliata by botanists – has a centuries-long tradition of being used as a food. It has a mild lettuce-like texture and flavor that make it great both in raw salad dishes and in cooked dishes.  Ethnographic papers of the pre-Goldrush era referred to this plant as Indian lettuce, since the indigenous peoples all used this plant for food.

As you discover in the book “Ishi in Two Worlds” by Theodora Kroeber,  once gold was discovered in California,  miners flooded into the state in search of riches, overwhelming native people and often killing them in one-sided pitched battles. The fact that lone Ishi of the Yana, the last of his tribe, managed to come out of the wilderness in 1911 and appear in Oroville, California was a miracle of human persistence.

Chinese peoples were there as well, and they too were pushed aside. The Chinese seemed to fare slightly better than the indigenous peoples, since they fought with both guns and legal means, but their numbers were still reduced dramatically by the Chinese Exclusionary Act of 1882, and local battles. 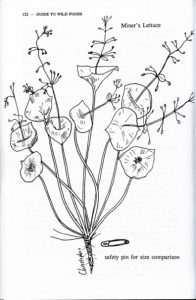 A drawing by Christopher Nyerges

The miners – mostly Irish – were frugal men who were intent on being enriched by gold.  Once the miners learned about this humble “Indian lettuce” which was so common in the spring, they ate it whenever they could. They consumed it raw, and cooked like spinach.  They ate it with fish, with meat, and in soup.  And because it contained vitamin C, it helped prevent scurvy in the men whose diet was mostly meat and beans.

And so, in the post-Gold Rush era, Claytonia perfoliata took on the name “Miner’s Lettuce” because of the miners voracious appetite for it, and it was a name that has stuck for the last 100+ years, despite the uncomfortable associations.

Now, a movement is afoot to right the wrongs of the past, at least as it pertains to the name of this plant.  Some native peoples are calling it by its post Gold Rush name, Indian Lettuce, or even by their local names. Some, like the Jepson manual (the official botanical manual for the state of California), are referring to it by its Ohlone name (the Ohlone reside in Northern California) of Ro-oreh.  It’s pronounced “row-oh-ray,” which might take a bit of getting used to.  I suspect that the name Indian Lettuce will take over as the term “Miner’s lettuce” is left in the dust.

According to healer Enrique Villasenor, “While some people may see this name change as politically correct, this small but important step recognizes the important connection between California native plants and California’s indigenous people. No one can change history, but we can do better going forward.” 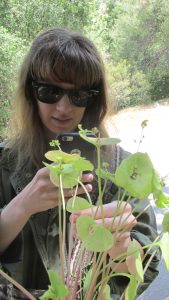 In case some of you are unfamiliar with this spring plant, here are some keys to identifying it.

Indian lettuce is an annual which arises after the winter and spring rains.   It is found mostly in wilderness areas.  When there is more rain, there is more Indian lettuce, with larger leaves. The next plants often appear in mass patches, such as where there is shade in canyons or abundant moisture. The first small leaves are trapezoid-shaped, delicate, and often water-spotted.  The leaves which produce the flowers have the characteristic cup-shaped leaf.  Each root grows a cluster of stems, which is what gave rise to the idea that this was like a head of lettuce. However, Indian lettuce is not related at all to the traditional “Lactuca” lettuces.

This is one of the very first wild foods that I learned to eat as a teenager.  Once I spent nearly a week eating little more than Indian lettuce: with these leaves, I made soup, salad, mixed stew, and an egg dish. I have devoted a chapter to this wonderful plant in several of my books on the uses of wild foods. 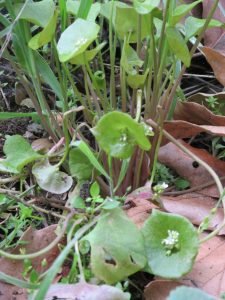 A view of the Indian lettuce plant

The seeds of Claytonia perfoliata are sometimes found for sale at native plant nurseries.  It is easy to cultivate as a garden plant when it’s in rich soil.  The plant is an annual and it readily re-seeds.

My one peeve about wildcrafters who collect this plant for food is that they needlessly uproot it.  I have always been able to collect what I need by clipping the stems low, but leaving the root. This means that the plant has a chance to continue to grow after I have left, and perhaps even produce more seed.