You are at Home Ammunition The Pros and Cons of 5.7x28mm

The firearms-buying frenzy continues unabated. While you’re struggling to find ammo and standard capacity magazines for your common rounds some people are jumping into less common rounds to avoid the hoard.

Spurred by political and safety concerns, gun owners old and new are buying up whatever inventory they can get their hands on. While things have eased up slightly as we enter 2022, gun sales are still sizzling hot. 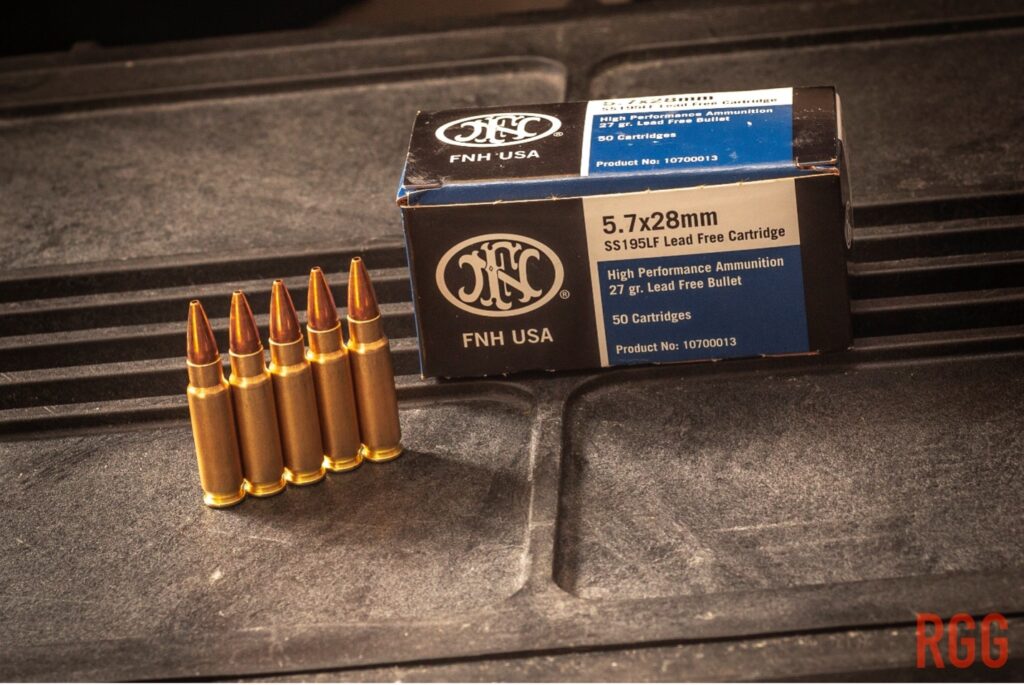 Ironically, it’s the normally rare firearms that seem to pop up in the inventory and stick around for longer than usual, such as FN PS90, FN Five-seveN, and Ruger 57, all chambered in the rather exotic 5.7x28mm caliber.

“OK”, you might be asking – “Is this yet another caliber?”

Yes, yes, it is. There are numerous calibers out there, and this is one of them.

Designed to be a caliber both for pistols and personal defense weapons (a vaguely defined class of guns that fit somewhere between a submachine gun and a rifle), the 5.7x28mm was a response to an audacious request by NATO – to replace the 9x19mm cartridge.

NATO sought to replace something that essentially “worked” for many decades in worldwide military service. To learn why, we’ll have to look back at the history of 5.7x28mm, which helps shed some light on the advantages and disadvantages of the caliber.

For decades, the most popular pistol cartridge in government service around the world was, and still is, the 9x19mm Luger/NATO cartridge. Picking a round like that makes the ammo easier to acquire, magazine easier to stock up on in bulk, it’s reliable, and it’s easy-to-shoot.

The 9x19mm flavors worked wonderfully for many decades since it’s inception in the early 20th.

However, governments and companies alike were developing more effective armoring technologies, which were rapidly diminishing the effectiveness of 9mm. This was in the late 1980s, so computer-designed hollow-points had yet to really make a splash on the market.

Also, the Hague Convention prohibited the use of hollow-point ammunition in warfare.

With that in mind, NATO put forth a request for more effective caliber. The responses varied, with eventually FN’s 5.7x28mm round coming out on top, along with it’s companion weapons, the P90, and the Five-seveN pistol coming out in 1990.

After a few years in development, and of course the cessation of the Cold War, NATO finally got around to evaluating the FN submission in 2002. By then, Heckler & Koch had developed and presented a competing cartridge, the HK 4.6x30mm – another little sizzler of a round that took the ethos of “fast and light”, and ran with it.

FN had the advantage, with two developed weapons, as well as it’s design being somewhat related to 5.56x45mm, allowing for the cartridge to be produced on existing ammunition production lines with a few modifications.

The cartridge had also readily beaten the NATO tests, easily penetrating Level IIIA body armor. Yes, many rifle cartridges can penetrate IIIA, but 5.7x28mm was the first to do so in it’s class of size 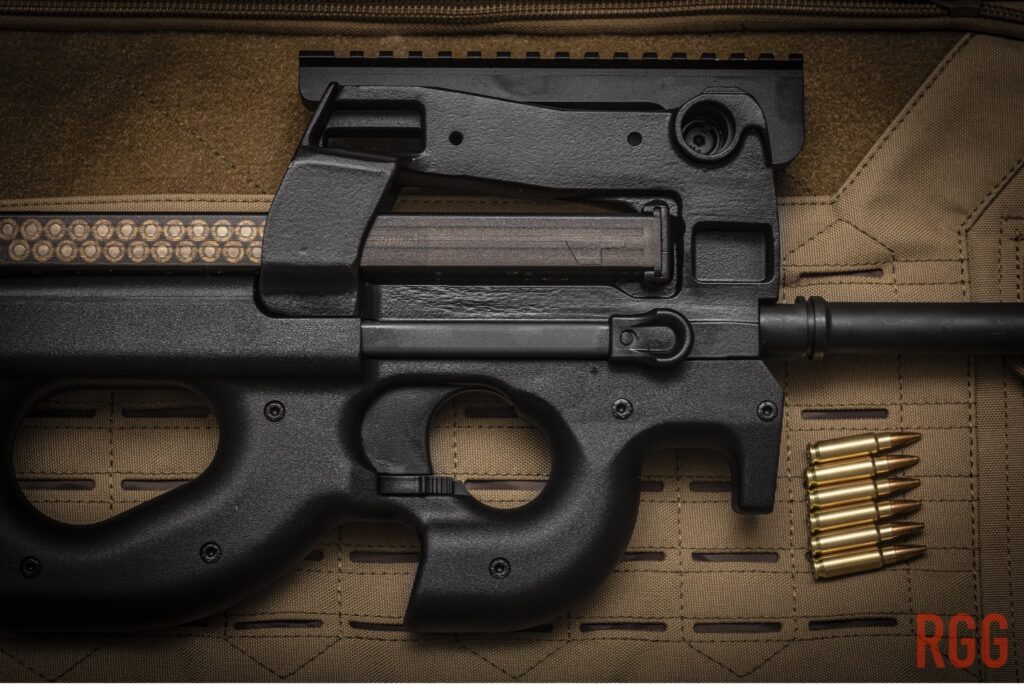 However, the Germans had major clout in NATO, and rejected 5.7x28mm for purely political reasons, bringing the standardization process to a halt.

Along the same lines, more effective 9mm and 5.56mm cartridges had been developed, allowing for existing inventories of firearms to be able to meet the NATO requirement.

Despite this, and the lack of adoption by regular police and military forces, the 5.7x28mm, and usually it’s companion PDW, the P90, found acceptance with specialist units around the world.

Such cases are the commando units in Belgium (where it replaced the UZI), Chilean Special Forces, Luxembourg’s police force, and our very own United States Secret Service, where the firearm is utilized by both the Uniformed Division and the “Detail” itself in keeping the President and First Family nice and secure.

Finally in 2021, NATO approved 5.7x28mm as a standard caliber, issuing Standardization Agreement (STANAG) 4509, opening up the door to expanded production and acceptance of this interesting caliber.

Like any caliber though, 5.7x28mm has pros and cons.

Like any cartridge, the design represents a specific answer to a specific question, so 5.7x28mm has some marked advantages and disadvantages.

It’s not for everyone – but one should be informed to make a decision on whether to commit to the caliber.

– Weight. The cartridge itself is very light, clocking in at two-thirds the weight of 9mm.

– Velocity. The lighter projectile hustles along at nearly and sometimes more than twice the speed of the 9mm.

– Capacity in a given weapon. With a standard duty pistol in 9mm, such as a GLOCK 17, you top out at 17+1 rounds in a standard magazine. In a Five-seveN, you have 20+1 rounds on tap. Those extra rounds can make a difference in a life-threatening situation. In the P90/PS90, you have 50+1 ready to go out of a standard magazine! 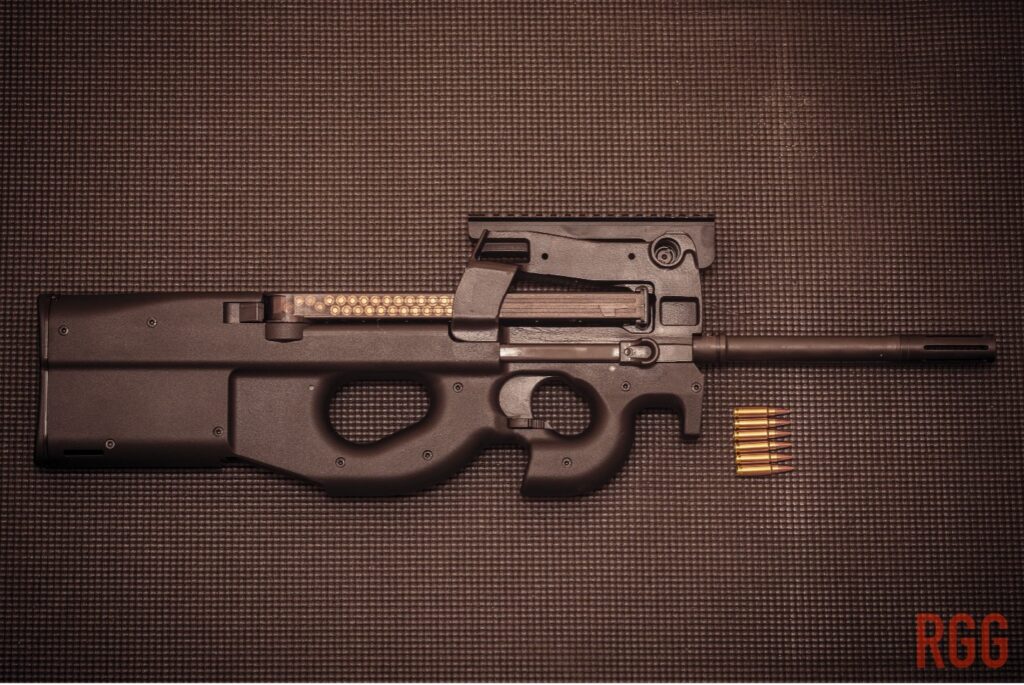 – Negligible recoil. Guns chambered in this round typically shoot very flat and are highly controllable, even in full-auto. A more satisfactory learning curve.

– With the proper projectile, the terminal ballistics are more akin to an intermediate rifle cartridge than a pistol round. Terminal ballistics is an industry term which basically outlines how a bullet behaves when it strikes a target, be it ballistics gel or a threat.

– The really effective 5.7x28mm ammo is ostensibly restricted nationwide. Known as SS190, it’s classed by the ATF to fit their definition of armor-piercing, and thus it’s technically not for sale to individuals in the US. It’s a legal grey area (in other words, you do so at your own risk), but one can purchase the projectiles themselves from secondhand sources. Small batches of complete ammo have been seen for sale as collectibles.

– Availability. Even in times of calm, it is hard to find. 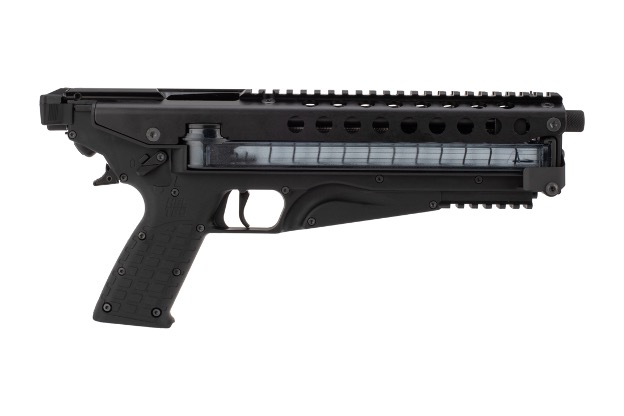 Of course, the key question is whether one should get a weapon in this caliber? Kel-Tec makes a great option but, but is this your first outing into the world of firearms?

Aside from the cost of the gun, getting trained up on it will prove costly.

Assume a few hundred rounds or more just to get comfortable. Even if you go the cheap route with a Ruger 57 or one of the CMMG options, you are still going through an insane amount of money for your first gun.

Stick with a well-regarded 9mm pistol or AR-15, and just run cheap range ammo to get competent.

If you’ve got a few guns in the vault, and some extra cash burning a hole in your pocket and no real urgent financial commitments?

Then yes, get a gun in 5.7x28mm. With the definitive offerings from FN, and now Ruger, CMMG, and Palmetto State Armory offering firearms in the caliber, 2022 could be the breakthrough year for 5.7x28mm