You are at Home Gear MAKING A PONCHO FROM A BLANKET

MAKING A PONCHO FROM A BLANKET

[Nyerges is the author of “How to Survive Anywhere,” “Extreme Simplicity,” and 20 other books on the outdoors and self-reliance.  He can be reached at www.SchoolofSelf-Reliance.com]

Those of you who say you don’t know how to sew or make things will enjoy this.  You know who you are. You believe you couldn’t make leather sandals, or even sew up rips on your clothing if your life depended on it.  Working with cloth and fabric, and learning the intricacies of sewing garments takes some time, but is actually pretty straightforward once you learn the basics. And besides, it very enjoyable and fulfilling to create some of your own clothing that you wear.

Making a poncho from a blanket is about a simple as you can get.  Do you remember Clint Eastwood in “The Good, The Bad, The Ugly,” traveling around during the Civil War looking for treasure?  In one scene, you saw him cover a dying soldier with his coat, and then Eastwood took a blanket from the soldier, which became his iconic poncho.

The blanket poncho is simple to make and has been in use for at least centuries in Mexico and into South America. 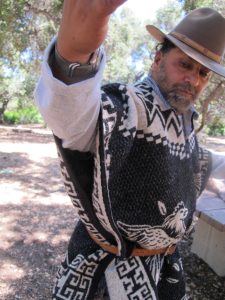 Cervera sometimes wears a belt with his poncho.

Yes, the blanket poncho is simply a blanket with a slit cut into the middle…anyone can do that!  But let’s look at a few of the details that make this a garment that you’ll enjoy wearing, and will enjoy being seen wearing.

The selection of the blanket is first.  Choose a fabric that will be appropriate to when and where you will be wearing it.  In colder climates, you’ll want a heavier blanket, perhaps made of wool.   If you’re in a warmer climate, you might select a cotton blanket.  And like it or not, you can’t avoid the profligate polyester fabric blankets now on the market. 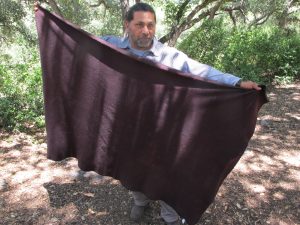 Angelo Cervera holds an inexpensive “fleece” blanket from a thrift store.  These can be purchased for a few dollars and are the ideal product for making your first blanket-poncho.

I used to buy beautiful and comfortable alpaca wool blankets from Peru.  You can still get alpaca wool, but my source was a small collective which made beautiful thick blankets that actually repelled the rain!  But for a variety reasons – mostly economical – they switched to polyester fabrics for their blankets.  The blankets still look the same, and they feel close to the original wool. Some people like them better. For one, the polyester blankets do not get buggy with the moth bugs in time if not stored carefully. And some – but not all — of the new polyesters somewhat mimic the qualities of wool by insulating even when wet.

I suggest that you do as I did for my first poncho.  Go to a flea market or thrift store and spend as little as possible to buy a used blanket for your project.  After you get the hang of it, you can use better blankets.

Remember, this will be one of your easiest sewing projects ever. 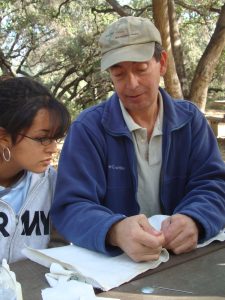 In a workshop by the author, students learn how to make their own outdoor clothing, such as vests, capotes, and ponchos.  Here, Gary Gonzales shows a sewing technique.

Now, take a look at your blanket.  Most blankets are rectangular, not square.  When you wear the blanket as a poncho, you want the long side to come up the front of your body and down the back, which leaves the sides open for your hands.  It’s possible that in certain cases, you may want the poncho to be worn side-to-side, but that is not the norm.

Then, you will cut a slit in the middle of the blanket. The slit should be parallel to the long side of the blanket, which is the norm, and gives your neck room to move forward and backward.  There may be some special cases where you want the slit to be side to side, from shoulder to shoulder, but that is not the norm, and that is not as comfortable. 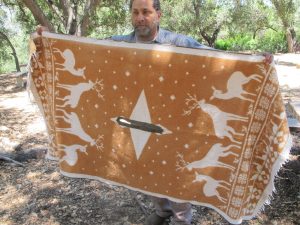 A finished poncho-blanket.  Note that it is rectangular, and that the slit for the head is hemmed.

OK, now all you need to do is take your knife or your scissors and cut a slit about a foot and a half long.  I suggest that you cut the slit just big enough to fit over your head at first, and then make it bigger as needed.  When you are comfortable with the length of the slit, you should hem the edge.  That simply means that you wrap the cut edge with enough thread so that the loose threads do not continually come out.  You could also get some hem material and cover your slit with that – all depends on how much you care about the look of your new blanket-poncho. 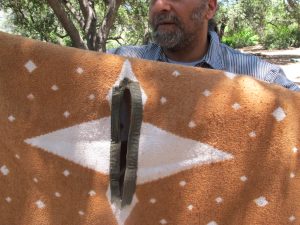 A view of the slit of the poncho, hemmed for comfort.

One of the things that I always do with a sewing project is to follow a pattern using paper, rather than the fabric, regardless how cheap the fabric cost.  So, if you have never done a sewing project, and if you want to follow my lead, you first cut a large sheet of paper, as large as the blanket you’ll be working with. Since no one has paper that large, you’ll end up taping sheets of newspaper or paper bags together until you get the desired size. Then cut your slit, and put on the poncho and get a sense of how it fits (or doesn’t fit) your body. By working with a paper model, you can tweak your pattern when you finally work with your chosen material, and though this is an extra step, I think it will actually save you time, and money, in the long run. 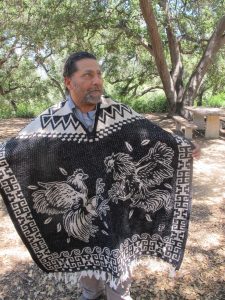 SOME HISTORY OF THE PONCHO

The Peruvian textile tradition, probably the oldest in the world, goes back thousands of years.

Peru is a country that weaves its history and Peruvian  chronicles are influenced by Alpaca fiber.

The Peruvian ponch is the typical dress of Peru,  a simple design coat. A rectangular piece of thick fabric – typically alpaca —  with a cut in the center practiced for the head. The cloth is dropped onto the body, having the ends so that the arms move freely allowed.

It is believed that the etymological source of the word “Poncho” comes from the Quechua word “Punchu, or the Mapudungun word “pontro.”

In Paracas, the poncho appeared at least 1000 years before Christ,  and was used as an offering for the burials. The different pre-Columbian cultures gave particular importance to the clothes that should accompany you to the afterlife. For those cultures the clothes are made to last beyond death, and the dead were believed to be properly equipped for the afterlife once they were garbed in alpaca fiber.

The differing beliefs, culture, and habits of the people of Peru can be seen in the diverse shape, size, texture and colors of the ponchos. In some areas of the country small red stripes represent the blood of the son of the Sun and Earth. In other areas, the color white symbolizes the spirit, and the black color and blue colors allude to the sky to where the spirit to rest. Green symbolizes agriculture.

The type of poncho called “Huañuy” was used for mourning or grief, and it is designed with small red stripes representing blood and Earth. The “Cushma” poncho is a small loose tunic stitched on both sides of the shoulders and embellished with dyes and geometric figures typical of the Amazon.  It is used for travel, and in the Peruvian jungle, both men and women from some tribes use the cushma,

The heavy ponchos used in Cajamarca are longer. However, in Cuzco, ponchos are much shorter and are renowned for their geometric shapes, often with a red background. In the Peruvian coast, ponchos that were used on the plantations were made of cotton fiber.

The poncho is part of everyday life in South America and has been built up in expressions; “Que no te pisen el Poncho,” meaning literally, “Do not you step on my Poncho” and is used to mean “do not be pushy.”  “Alzar el Poncho,” meaning “Rearing Poncho”, which is an expression meaning to rebel against the establishment.

Even when we refer to a place far away, the expression is used “Donde el diablo perdió el Poncho,” meaning “Where the devil lost his Poncho” …

Besides being popular among all the people that have lived along the Andes, the poncho is also a very important cultural icon for many indigenous people.

Although there is contention as to the exact origin of the garment, it was the Mapuche who spread what we know today as the poncho throughout Spain and Latin America. The Mapuche are highly-skilled weavers and fashioned a number of items as well as ponchos, including headbands, dresses and shawls.

The poncho also held connotations of power among the Mapuche population; the stepped-diamond motif was considered to be a sign of authority and was often only worn by older men, leaders and the heads of the paternal lineage in families. Current uses for the poncho include: 1. Rain expulsion: thin polyethylene waterproof cloaks in the poncho shape are worn to protect against the rain. A garment based on the poncho was even used as raincoats for US troops during the Civil War. 2. Fashion item: ponchos are a prominent style piece during autumn and winter in western countries.

Popular among women of all ages and produced in a range of designs and fabrics, the poncho is one of the must-haves in the fashion world. Having been worn by their people for hundreds of years, the poncho is also closely linked to Mexican culture in the form of the Sarape with pre-Hispanic and Iberian motifs. This colorful cloth is widely considered an iconic symbol of Mexico.

The Mexican poncho has two distinct styles: Although the poncho was previously a traditional clothing item born out of the necessity to keep warm and protect the body from harsh weather conditions while still having the freedom of movement to continue working comfortably, it is now more frequently worn as a fashion accessory and can be found in the majority of style outlets. 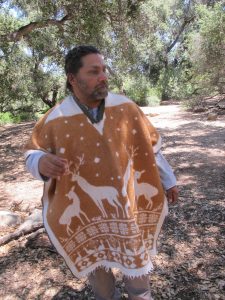 The normal way to wear a poncho.  Note that the slit is cut along the long length of the blanket. 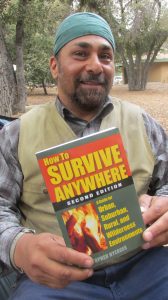