There are a few reasons why you might want to roll your own ammo. A lot of shooters want to be able to fine tune the performance of their weapon, usually to either add stopping power or massive muzzle velocity. This time around Epic Tactical is going to focus on the former, and showcase 4 of the biggest, baddest, shoulder-numbing, wrist-snapping wildcats ever made.

[expand title=”Check out the rest of the article”]

This huge round sounds like it was created on a dare. McMillan shortened and necked down a 20mm autocannon case, modified the electric primer to work with a centerfire rifle, and loaded it with a .50 BMG bullet. Unfortunately when you shoot a big heavy bullet at a high velocity, like the Fat Mac does, it really burns out your barrel in a hurry. Reports say that the average life of a barrel firing .50 McMillan is less than 100 rounds.

Sometimes you just need to be able to take down large game in one shot. Sometimes that large game happens to be a Cape buffalo, or nyati in Swahili, one of the most deadly animals in South Africa. What they lack in sharp teeth and long claws, they make up for in a thick hide, huge dense bones, and massive amounts of muscle protecting their vitals. In order to stop his clients from being trampled to death, Ross Seyfried created the .585 Nyati. 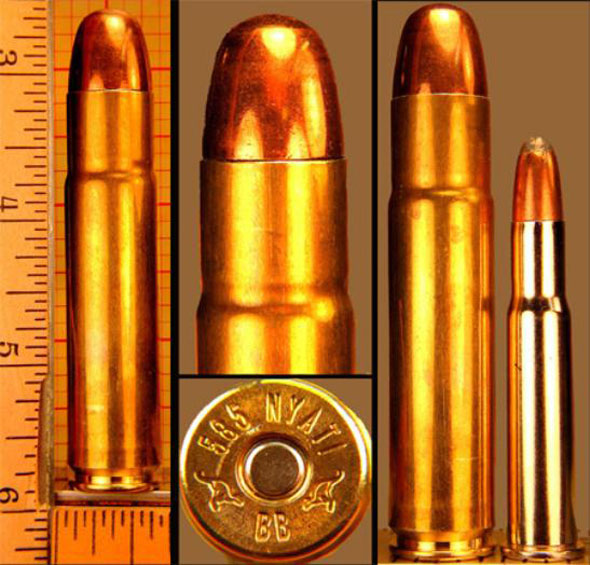 .585 Nyati is a big game guide’s dream, as long as the guide is willing to put his shoulder on the line. This round kicks twice as hard as .500 Nitro Express, and fires the big 14mm bullet with enough power to penetrate hardened steel at 300 yards. That in itself isn’t exceptional, but when you consider it’s a soft lead expanding round, and not a tiny .223 with a steel penetrator, it’s awfully impressive. .585 Nyati pushes even the thickest, heaviest steel gong around like it’s a wind chime.

This round combines the best of both .357 and .44 Magnum into one destructive package. The 357-44 Bain & Davis is a product of gunsmith Keith Davis’ attempts to increase the velocity of .357 Magnum, flattening out its trajectory and making it more accurate, and even deadlier, out to 100 yards or more. As a result the 357-44 saw action not only in pistols, but in lever-action carbines as well. The .44 Magnum case was bottle-necked to accept a .357 Magnum bullet, increasing the pressure in the chamber and creating one of the most powerful pistol rounds ever made. 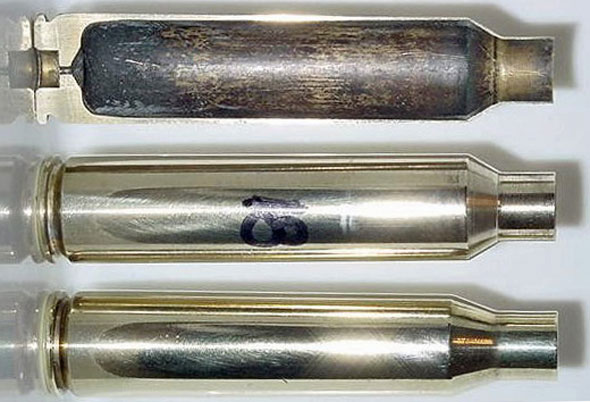 If you happen to be out of the loop, .338 Lapua Magnum currently holds the distinction of being the round used for the world’s longest sniper kill. The .338 Yogi shares similar long-range ballistics, but with more powder packed into a modified case in order to zip it out of the barrel up to 25% faster. This hard hitting, long range round has an ultra-flat trajectory for such a large, heavy bullet. For long range shooters, almost nothing can stack up to the .338 Yogi.
[/expand]