You are at Home Prepping AMBASSADOR OF THE SUPER FOOD, SURVIVAL FOOD: PRICKLY PEAR CACTUS

[Nyerges is the author of “Guide to Wild Foods,” “Foraging California,” “How to Survive Anywhere,” and other books. He leads regular field trips, and can be reached at www.SchoolofSelf-Reliance.com]

Enrique Villaseñor is at the head of the classroom, extolling the many unsung virtues of the prickly pear cactus.  “It’s often referred to as poor people’s food,” he explains, “but did you know that it contains all the  essential amino acids, and some non-essential amino acids as well?” 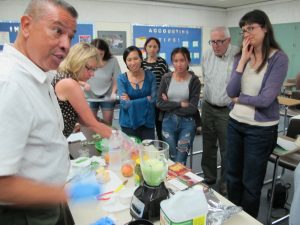 Villaseñor is the defacto ambassador of the humble prickly pear cactus, a plant that has been used for food and medicine for millenia.

Besides assisting Dr. Adams in teaching how to practice traditional healing with herbs and lifestyle, he has become a walking encyclopedia on what he called the “superfood” of the prickly pear cactus.  He doesn’t want people to think of this food as simply as food of poor people who can’t afford “real food.” Rather, he points to all the current products (food, medicine, fabric, etc.) that are currently on the market which as manufactured from the prickly pear cactus.

In his two hour dynamic presentation, Villaseñor takes his audience through the fascinating history, and the vast healthful benefits, of the prickly pear cactus, beginning with the fact that cacti remnants were found in jars in Mexico dating back 10,000 years.  He explains that archaeologists have found old jars that contained not only cactus, but teosinte (the forerunner to corn), chili, amaranth, sapote, and mesquite, some of the earliest foods from this continent.

As part of his presentation, Villaseñor shares details from the historical book, “Relacion de Cabeza deVaca,” the account of Alvar Nunez Cabeza de Vaca’s journey in the unknown interior of America.  He was one of four survivors of the 1527 Narvaez expedition. From 1527 to 1536, he wandered across the U.S. Southwest, learning from the natives about the local foods. Though he was a slave for the first two years, he became both a trader and a healer to the various tribes. He learned of the value of the nopal (aka the prickly pear cactus) from the natives and used it for scurvy, treating arrow wounds, and for stomach issues. After returning to Spain in 1537, he wrote his account of the journey, first published in 1542. Cabeza de Vaca is sometimes considered a proto-anthropologist for his detailed accounts of the many tribes of Native Americans that he encountered. 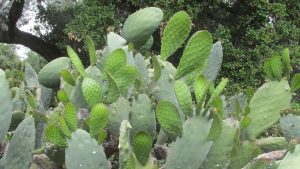 GOOD FOR THE IMMUNE SYSTEM

“The prickly pear cactus is one of the best immune system boosters,” says Villaseñor, quoting Hippocrates, who said “Let food be thy medicine, and let medicine be thy food.”

Historically, the prickly pear cactus pads have been used for lowering cholesterol levels, digestive issues, edema, wounds, bronchitis, fevers, vitiligo, inflammation, type II diabetes, muscle pain, urinary problems, burns, and liver problems.  Students of Villaseñor listen in awe, wondering why they have always considered the prickly pear just a food to eat when you’re next to starving, rather than the superfood it is.

Villaseñor explains that because prickly pear was always available in good times and bad, in times of drought and plenty, it was always something that poor people could and did use, but then it came to be regarded as simply a food of last resort.

Today, however, that view is changing. Villaseñor pulls up a screen image from Amazon, showing literally hundreds of products made from the prickly pear on Amazon. This includes food and food supplements, pills for diabetes, as well as various products from the cochineal bug that is often found on the prickly pear plants. The cochineal has historically been dried and crushed to get carminic acid, and a very good red dye for clothing and even food products.  When cochineal is present on the growing cactus pads, it appears as little white fuzzy spots.

The highlight of Villaseñor’s presentation is when he turns on a food processor and makes a prickly pear drink for everyone to try.

First, he carefully scrapes the young pads to remove all the spines and the tiny hair-like glochids. He puts one large pad into the blender, and adds one apple and one peeled orange, and blends it all.  The resultant drink is thick, and so it can be thinned further with water if one prefers. Everyone enjoyed the tartness and sweetness of the drink. No sugar is ever added. 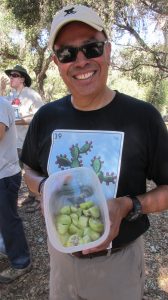 Dice 1 Prickly Pear pad. Place in blender with 2 cups of water. Blend. Dice 1 green apple. Blend. Dice 1 peeled orange. Blend. Add additional water to taste if the smoothie is too thick for you.  Serve chilled with ice. Use lime to taste. Do not add sugar. Suggested serving is 1.5 cups 2X a day. Enjoy!

According to Villaseñor, this is one of the best ways to get your daily intake of the prickly pear, in a form that is tasty and easy to prepare.  The benefits are that it strengthens your immune system, helps you to lose weight, and lowers your cholesterol.

He does not advocate cooking the cactus if you want it for its medicinal benefits.

Villaseñor adds that complete health is really about complete balance, and by “balance” he explains that each of us need to find balance physically, spiritually, socially, and financially within our community and family.  “You should work at each of these every day,” he explains.

Villaseñor shares a little about his background during his presentation.  His mother lived to be  101 years old, and she taught him Balance in all things. “I was outside all day, always doing things outdoors,” he explains. “And when we had a problem, my mother healed us!”

Villaseñor also shares testimonials from students of his and Dr. Adams, students who have experienced lower glucose levels, improved bowel movements, weight loss, and lower cholesterol levels by consuming the prickly pear cactus drink, and other herbal remedies they teach.

Regarding the many additives to foods today, Villaseñor advises, “If you cannot pronounce it, do not eat it!”

Villaseñor smiles as he shares an old idiom, which underscores how Mexico’s identity is tied to the nopal, or prickly pear cactus.  “Soy mas Mexicano que el nopal,” he says, which translates as “I am more Mexican than the cactus” The expression is asking, between the lines, what came first, the Mexican or the cactus, affirming the person’s pride in being Mexican.

Enrique Villaseñor can be contacted at Senornopales@gmail.com. 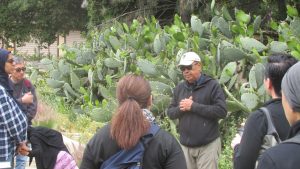 NUTRITIONAL DATA ON THE CACTUS

Eating prickly pear has long been regarded as a folk medicine way to deal with diabetes.  Now, modern medicine has confirmed that eating the prickly pear cactus pads (or making juice of them) can help those who suffer from diabetes. For additional scientific data, see “Prickly Pear Cactus Medicine” by Ran Knishinsky. This book provides the scientific evidence that prickly pear cactus fruits and pads are useful for treating diabetes, cholesterol, and the immune system.

The cactus pads and fruits are also very nutritious.

From the book “Prickly Pear Cactus Medicine” by Knishinsky.