You are at Home News America, what is wrong with us? 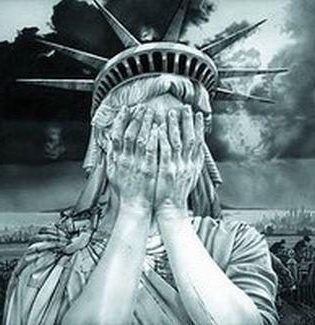 America, what is wrong with us?

With the recent tragic events that have occurred over the past week, heck, we’ll even say the past few months, my only thought has been…what is wrong with America? We have seen Facebook and many social media sites flooded with the changing of profiles to the US Flag, the Thin Blue Line, etc, and seen many social media hashtags with #neverforget, #praying, #prayers for whomever, #whatever lives matter. FYI, putting up hashtags has never done anything. All it does, it brings awareness that you have seen the mass media coverage and have seen what other people have posted on the said social media sites.

As an American, I am outraged as to what our beloved country has become. We have deemed it okay for people to walk around with no repercussion for their actions. :cough: :cough: :Hillary Clinton: :cough: Cops killing innocent people. Cops being killed just by their color and doing their job of protecting the public. People dismissing Muslims, and cultures in general. People killing over beliefs. When will the killing and transgressions stop? When will the racism stop? When will the profiling stop? When will America become united again?

As an American, I am appalled that we let people, er the media, dictate what we should believe and see. I am appalled that our own Government is letting all this unfold, and somewhat encourage these actions. Instead of Black Lives Matter, Blue Lives Matter, White Lives Matter, Hispanic Lives Matter, etc, how about All Lives Matter. Someone once said, “that the worlds a stage, and each must play a part.” What is your part on this stage? Are you the instigator shouting out inequality but doing it in a non-peaceful manner? Are you the “Patriot” that is shouting Molon Labe? Are you the one seeking out someone to blame for every thing that has happened? Remember when you point a finger at someone, you have three pointing right back at you. So, again, I ask, what are you doing to fix the problems that are out there? There are many keyboard warriors out there that think they know it all, on every single issue there is, but has never walked in anyone’s shoes but their own. Have you ever been put into a situation where your life is at stake? I put on a uniform every four days to go into someone’s home who called 911 and is needing help. I put on a uniform and render care to a stranger and try my damnest to save their life. I put on a uniform and bear the burden of doing every thing I can and potentially not being able to save your loved one. I put on a uniform and run towards the danger, when every one else is running away from it. I put on a uniform, come to work and do my job, and hope and pray I get to go home and see my loved ones again. I put on a uniform and serve the citizens of my local community and county. I put on my uniform to make a difference in this world. I put on my uniform and guess what, my life matters, just like yours.

We are so quick to judge someone and to judge a situation before we have got all the facts. Facts. That’s a funny word that can be misconstrued and smeared. We are so quick to bring a conviction to a situation before we have received all the facts. We are quick to blame and condemn all police officers. We are quick to blame the gun. We are quick to blame the victim. We are quick to shout out “No Justice, No Peace” for a situation that we do not know all the facts, but are shouting it because every one else is. When did America become such Sheep? When did America become followers, and not leaders? When did the American people revert back to a time in history, that I was taught has changed. This is 2016, not the 1950’s and 1960’s. We live in a time where we believe what we see on television and not to question what we are seeing. We believe every news media outlet as the gospel, when their job is to try and achieve ratings and views at any cost.

Everyone has their own ideas and views. Everyone is entitled to their ideas and views, under the First Amendment. Just be mindful that every person may not have the same ideas and views as you, and that’s ok as well. Just be respectful and courteous to each other. If we achieve all of this, WE as a Nation, will thrive, and we as a Human Society will survive and thrive. I am not sure why everyone is filled with so much hate and so much anger towards each other these days. People will blame the politicians. Some will blame society. Others will blame the Media. I honestly find everyone at fault. Everybody is responsible for their own actions and ideas. As the dust settles, everyone will have to answer to a higher person after it is all said and done, be it in a court of law or part of your religious beliefs.

I am not here to sway anyone or to put blame on anyone for the situations that have occurred over the past few days. I am here simply to say, “Why Can’t We All Just Get Along!?”