You are at Home Prepping An aromatic Central American spice, said to prevent gas and indigestion

A SOLUTION TO A PROBLEM

WHEN YOU’RE SHARING A SMALL TENT WITH SOMEONE

believed to have been used by the ancient Maya

Anyone who uses beans as a significant part of their diet should know about epazote.  And anyone who’s had to share a tent with a fellow Dirttimer will really want to share this herb with your tent-made. (You know who you are!). Epazote is also called Nature’s Bean-O.

I first learned of the remarkable gas-relieving effects of epazote in 1975 while studying Mexican and Central American herbalism. Once my instructor, Gene Matlock, had introduced me to this herb, I immediately recognized it as the common plant of so many of the streams I’d hiked along in the hills above my Pasadena home.

My Costa Rican instructor shared with me his family secrets: Add a few leaves of epazote to a pot of beans for a delicious flavor and to render the beans gas-free.

As the years progressed, I was astounded that virtually no Americans I’d talked with were familiar with this herb, let alone its anti-gas effects. Yet, this common, inconspicuous herb had been known and used in Southern Mexico and Central America for centuries!  Today, though still not common, you can find little packages of dried epazote in many markets, and bundles of the fresh leaves in many farmers markets. 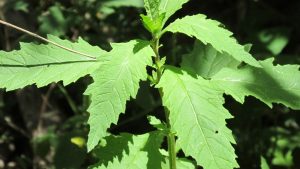 In the recorded literature of Europe and North American, epazote (formerly Chenopodium ambrosiodes, now called Dysphania ambrosiodes by botanists) is known for it efficacy in expelling intestinal worms. For dogs and cats, add one teaspoon of the seed (or herb) to their meals  until the worms clear up. The herb is said to be less effective against tapeworms.

I used to toss a sprig into my chicken coop to keep the chickens clean of worms.

The Natchez Indians used epazote to expel worms in children. The Chinese used the herb as a diaphoretic (promotes sweating). The anthelmintic/vermifuge qualities of epazote are well recognized, and the herb is cultivated in parts of the Soviet Union for this use.

Herbalists believe that epazote was also used by the ancient Mayans both as a spice and medicine.

It is believed that epazote’s effectiveness in removing the “gassiness” of beans is due to the presence of oil of chenopodium, which is found in concentrations of 10% in the seed, and one percent in the leaf.

By the way, it is not rare to find epazote listed in a book on poisonous plants, because high concentrations of the oil of chenopodium is considered toxic.  But I have never heard of anyone getting even remotely poisoned from this herb, because as long as used in culinary dishes, as described here, it’s safe and delicious.  I think you’d have to work very hard to somehow get poisoned by epazote.

Remember that excess flatulence is a symptom, and that epazote only deals with that symptom. The gas problem will continue if the cause is not eliminated. Some methods to eliminate the cause of gas are eating slowly, proper food combination, and others. 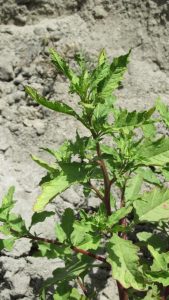 I first began to collect the spicy leaves of epazote during my spring hikes into my local foothills.  But like most gardeners and herb-lovers, I eventually wanted to have my own patch of epazote growing near my kitchen door.

In late summer, I collect the wild seed on the dried plants.  I plant these seeds in my yard, in an environment which somewhat replicates the plant’s ideal wild environment.  Epazote prefers semi-shaded river beds where the soil is sandy and well-drained, and where it’s usually moist.  Thus, I plant the seeds on the north side of my house where there’s the most shade, in well-drained soil.  Epazote seeds may take up to a month to sprout, a fact which leads many gardeners to suspect their crop failed.  To help, the seeds should be soaked in water for 24 hours and then planted.  Additionally, you can sow the seeds in a pot or garden bed where other plants are growing.  This way, you won’t get frustrated as you water a bare spot of soil.

Sprouted epazote has a bright green appearance, and even when very young you can detect the characteristic epazote aroma.  Sometimes you’ll see a few blotches of red on the young sprouts.

Harvesting the mid-sized epazote plants is easy.  Just pinch off the top new growth.  Pinch off just what you need at the time, or pinch back a lot if you plan to dry some of the herb for storage.  The leaf production of each epazote plant is greatly increased by this pinching.  The entire above-ground plant will die back each year, but as long as the soil hasn’t dried out, the roots will continue to produce year after year.  Also, the regular pinching-back of the leaves during the growing season will significantly extend the growing season for your plants.

Epazote leaves are best dried in the dark (I dry mine in an attic).  I spread the leaves thinly on newspaper or brown paper bags.  The dried herb is best stored in an opaque jar.

The seeds (for growing) and packets of the dried herb can be purchased from Survival Seeds, P.O. Box 41-834, Los Angeles, CA 90041.  Seeds for growing are $4; herb is $5.50 a packet (when in stock). There is also a unique booklet entitled What Causes Gas? ($8), which describes the many dietary and non-dietary causes of gas, as well as practical solutions. 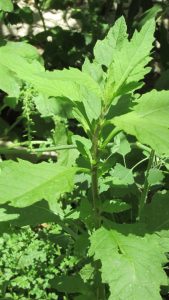 Cooking with epazote is easy! Add approx. one tablespoon of the herb — both the chopped stems and the leaves — to a pot of beans. You can use it fresh or dried.  The epazote herb can also be added to soups, stews, and made into tea. The powdered leaves can be added to salads, such as potato and bean salads.

Here are some simple recipes I’ve developed for using epazote.

Wash the lentils, and then simmer for an hour and a half. Add the other ingredients when the beans are nearly soft. Simmer `til the vegetables are soft. (Add salt or kelp to taste, if desired.)

Salt and pepper, to taste, if desired

Marinate the beans in the dressing, preferably at least eight hours, but no less than 30 minutes.

salt and pepper, to taste

Cook the beans first for about an hour until tender. Then add the onions and potatoes,and cook until tender. Add the seasonings. Let simmer on low temperature for 15 minutes before serving.

captions:
Pictures show the epazote plant.
In one, it shows farmer Adrian Gaytan who grows and sells Epazote at farmers markets

[Nyerges is the author of “Guide to Wild Foods,” “How to Survive Anywhere,” “Extreme Simplicity,” and other books on plants and self-reliance. He has taught since 1974, and conducts a weekly podcast on Preparedness Radio Network. He can be reached at www.ChristopherNyerges.com