[Nyerges is the author of “How to Survive Anywhere” and other books. He has been leading survival classes since 1974.  To learn about his books and classes, contact School of Self-Reliance, Box 41834, Eagle Rock, CA 90041, or www.SchoolofSelf-Relance.com.]

Everyone has an opinion about what constitutes a “survival kit.”  Most backpacking stores provide you with a very specific list of what you should have in your personal survival kit, but that list is based upon what they want to sell you, not necessarily what you need.  In fact, there is no “final word” on survival kits.  The best ones are custom-made to fit your personal needs, in the situations dictated by the weather and your travel patterns.

The reality for most people, in the overwhelming cases of disaster, is that you will have to stay put and make do wherever you are.  In the overwhelming number of cases, you’ll not be bugging out to anywhere, you’ll be helping your neighbors and fixing up your local infrastructure.

Mark Tsunokai  is a 26 year veteran of the Army who specialized in light infantry and chemical warfare.  He had two tours in Kuwait and one in Iraq.   He’s had plenty of time to think about bugging out vs. bugging in.  He told me that, as far as he’s concerned, staying put is the far more viable survival option.  One of the many weaknesses of the “bug out” concept is that – assuming you’ll be driving – is that the highways will be packed with other people who share the same idea.  And where will everyone be going to?  If you’re on foot, how long will it be before you can reasonably get to wherever it is you think you’re going to?  Can you defend yourself along the way? 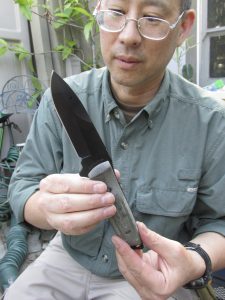 To Tsunokai, his “get home” bag is far more important because he knows that everything he needs is at home, not at some indistinct distance location.

Here are the contents of the containers that Tsunokai always carries in his truck.

He showed me the two plastic containers in the back of his pickup, which he always carries. He explains how his military experience influenced both his choice to always carry a survival kit in the truck, as well as his choice of items.

“Most of the military and civilian jobs I’ve had were quite a ways from home, especially when I was living in San Diego,” says Tsunokai, who realized that he should always be ready for a breakdown or other disruption.  His military background taught him that he could not always expect an immediate resupply or backup, and he should be prepared to handle a situation by himself. And since he often trained in austere situations, he attempted to select gear that had as many uses as possible.

Tsunokai’s gear consists of two plastic boxes and one day pack, which he calls his “get home” bag. 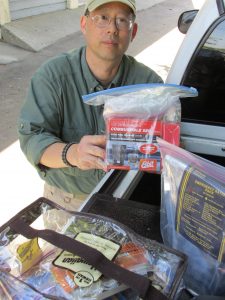 In here, he carries the gear that everyone in a car should have just to take care of the expected needs of travel. He has jumper cables, road flares, and gloves.  He carries chains, since sometimes he is in snow country. He also carries a bag of kitty litter, which he has found gives him a bit more traction when stuck in the snow.

In this box, he also carries a black bag which he purchased as a unit (for about $70.).

It includes some smaller auto gear, such as a can of Seal-a-flat, reflector tape, rags, and a little compressor to give air to the tires.

He carries an original Esbit stove with fuel and a cooking pot. For those unfamiliar with Esbit, this is a folding stove that folds down when not in use to about the size of a pack of playing cards.  He carries a gallon of water, and two Mountain House entrees.  He carries a spare fuel can, a large outdoor blanket, a Gerber multi-tool, a folding shovel, and a large cloth signaling panel.

THE “GET HOME” PACK

We’ve all heard of a “bug out” bag, right?  That’s the bag  you grab in an emergency so can evac out to who knows where.  Tsunokai carries a far-more realistic bag, what he calls the “get home” bag.

It’s a North Face black pack.  “I chose this particular pack because it’s less boxy, but tall and narrow,” explains Tsunokai.  “If I had to abandon my vehicle, I’d put on this pack to get home.”

It seems like there’s a lot in this pack, but it only weighs 22 pounds.

Here’s a list of what’s in his “get home” pack.

A roll of first aid tape.

Two of the latest military combat bandages, cost about $6 each.

One large military space blanket, which he’s used many times in the Mohave Desert. This one is also noisy and shiny (like most “space blankets” so it is used only in non-tactical situations.

A yellow bivvy sack (to cover a sleeping bag), about $20.

About 5 yards of para cord.

A large roll of duct tape.

A Gerber backpacking saw (about $15)

Three light-sticks, which provide about 8 hours of light each.

Sun hat, orange red on one side as a distress sign.

One full MRE meal and a heater

One Datrex energy bar, the type used on life boats) The Datrex product is designed specifically so you don’t get too thirsty eating it, and the packaging is heat-resistant.  It is Coast Guard-approved.

Playing cards with survival tips on one side

The Air Force Survival Manual. Tsunokai chose this publication because it contains all the basics, is printed on waterproof paper, and has text that is easy to read.

“You Can Survive,” which is a mini-survival kit in a can that someone gave to him.

A Deluxe Tool Kit, made by Ultimate Survival, consisting of a signaling mirror, a Blastmatch, a whistle, and a wire saw.

Tsunokai points out that his survival kit is not static, and that if something doesn’t meet his expectations in the field, he will get rid of it and try something else.  Also, some things expire and must be replaced. The light sticks, for example, should be changed at least every 5 years. Food, water, and some first aid items must also be periodically checked and replaced. 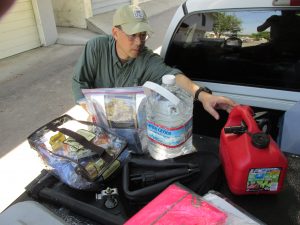 Tsunokai also carries along a two quart bladder canteen, which is collapsible when not in use.  This can be obtained at a surplus store. With the canteen, he carries iodine pills for water purification.

“How can you test if the iodine pills are still good?,” Tsunokai asks.  He pulls one out and shows it to me.  “If it’s a steel gray color – like this – it’s still good.”  When the pills turn brown, they are no longer good, he explains. In time, or when exposed to air, the pills will stick together, or get crumbly, and should be replaced.

Carrying these items in his vehicle has given Tsunokai peace of mind when traveling around.  He doesn’t generally tell people that he carries these things around, but his friends who know about it think it’s a good idea.