You are at Home Rifle Avoiding the “Tacticool” Phenomenon

In the past couple of years there has been a trend of “tactical gear” It seems every company wants to sell you the best pants, shoes, Velcro whatevers, and the real money-maker, gun accessories. That’s right, now every 20 something college dropout to middle-aged accountant can be a Delta level operator. With a quick click online you can easily get the look of a real battle hardened badass shipped to your front door in less than two business days. There is a name for this phenomenon, “tacticool”

Tacitcool is basically anything that serves no real purpose except looking cool. Sure bro I see your AR-15 tricked out with bipod forward grip, angled grip, flashlight, a red and green lasers, fake ACOG scope with reddot on top plus 45 degree iron sights. That’s great except your gun weighs 13 pounds. If you’ve ever had to carry weapon into combat or actually hold it for longer than ten minutes you’ll start to see that every ounce counts. Plus everyone who actually knows what they are doing thinks you’re a moron. Save some money on your useless accessories and spend it on a decent rifle that has I don’t know, maybe a factory dust cover! Or some shooting lessons, because otherwise your tacticool rifle is just good for getting Facebook likes from other morons.

Here is what you need:

A decent base rifle (I won’t discuss brands as this can be argued all day. However I am religious in making sure the darn thing has a dust cover).

I prefer a free float. The free float attaches directly to the upper and does not touch the barrel. By the hand guard not touching the barrel there is no change of the shot being thrown by you putting too much or too little pressure on it. 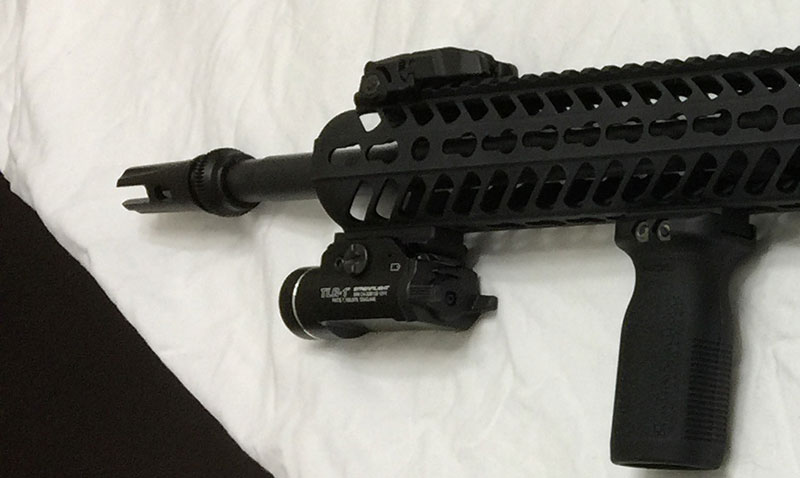 Hard to shoot what you cannot see. But learn how to use the damn thing so you don’t stay lite up like an airport runway.

I’m a huge fan of Iron A2 front post, and adjustable rear but that’s just me. There is nothing wrong with a set of quality flip-ups.

This one is optional. A good marine friend of mine cringes at the thought of any sights besides his precious irons. However you need one. None of this ACOG plus red dot on top non-sense. Your rifle isn’t multi mission designed. Pick one Holographic, reddot, ACOG, long range glass.

That’s it anymore and you are trying way to hard.

Camouflage. You don’t have to wear multicam everywhere you go. While it’s a great pattern that blends in well in most environments, it doesn’t blend in well at McDonald’s. Medkits. “but I saw MASH reruns at grandpa’s I am totally a combat medic”. No you’re a idiot unless you have had training, real training. Don’t come near me with that tourniquet and nasopharyngeal airway. What you are carrying is real medical equipment that you can actually hurt someone with if you don’t know what you are doing.

You don’t need to wear your 5.11 pants, American flag hat and combat shirt to go to the grocery store. Do you plan on flank rolling around the ice cream display? Every cop and military vet I know doesn’t look like they just got done kicking in doors. You know why? Because they want to blend in, not stick out (but I digress, look for this topic in a future article.) In the end, shoot, train. But do your research on the useless crap your buying. Save yourself some money and keep yourself from looking stupid to people who have actually been there and done that.

"B" is a gruff no nonsense type.