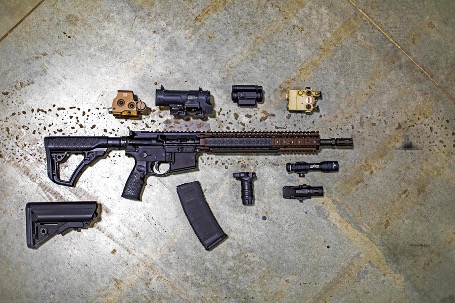 As we look at the landscape of the AR market, and visualize the next build, it’s hard to think about minimalism with so many incredible parts and components and accessories available. Sure, most builds for the mainstream buyer start with a lower receiver, but many begin to escalate quickly from there.

This is an exploration about building a gun that isn’t necessarily minimalist, but it is strategically built to minimize clutter and maximize capability. If you had to label it – one gun that can do the defensive job, but doesn’t feel overdone when you look at it, or move around with it in a real-world scenario.

Here are some thoughts about what it takes to build a streamlined, but capable rifle on the AR platform and still expect it to deliver when you need it to.

If you had one chance to build the perfect gun, how much would accessories matter – Real Talk

When you think about the previous decades and how gun owners used their rifles, and how those guns had to perform so many tasks – you realize this generation is a bit spoiled with options and accessories. That’s not a complaint, but it does make one wonder if it can be straightforward to build a gun and expect it to perform without adding a bunch of “stuff” to it. This is not an experiment in self discipline, it’s more about exploring how one can still meet all needs without frivolity if planned properly.

When you talk to the people who do real world warfighting, they will give you a goofy glance more often than not, when you start talking about adding accessories. Most of them, the really hardcore operator types, try to go low drag. That includes their rifles. They want it slim, and snag-free, functional and 100% reliable. Anything after that, which doesn’t add weight or bulk is just icing on the cake.

If you think it all the way through – those operator types might know a thing or two about what can go wrong and how to avoid problems during the most real “real world” scenarios you can imagine.

How many times have you consciously babied one of your accessories because it’s hanging off the forend too far? Or been worried that in a run and gun training that you would have a broken optic at the end of it and a tweaked flashlight mount and an IR setup that won’t function anymore. That’s kind of the point. If you are doing hardcore things, those are the components and accessories that are made to make the quality of life easier. They should be used in a way that they can fulfill their lot in life, and not get smacked around unnecessarily.

Part of building the right gun is using restraint.

A couple of notable quotes come to mind:

“The simplest solution is the right one.” and “Design is perfect when nothing more can be taken away.” 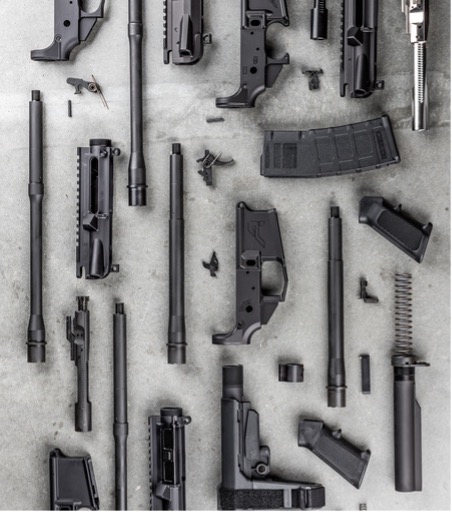 What does a shooter need on the outside of the rifle that cannot be decoupled from the rifle build? The Magazine only. Let’s start there. You don’t have to settle for poorly made Aluminum magazines with steel plates and horrible springs and even worse followers anymore. The apex of magazines is here. And they cost $12 or so.

Sights. You need to be able to hit what you’re aiming at. Optics are awesome and fast and cool. And often they can help you to be better than you are as a shooter because you can attenuate faster with better point of aim to point of impact metrics. The reality is this though: iron sights always work. They don’t run out of batteries. If you buy real ones (e.g. premium steel BUIS’s) they don’t fall apart. If you know how to shoot well with iron sights, you can shoot with anything else.

Forget about two optics until you have a demonstrable need for the second optic. If you are not in need of something to enhance by heat or light signature, then stick with the basic optic you will use 85%+ of the time. The extra weight and subconscious babying that you will allow it to take up will not be equaled by its real-time value, generally.

Buy the best bolt and carrier you can buy. Buy the best trigger group you can buy. The right stock and grip and forearm. And get that forearm as close to the diameter of your barrel/gas system as possible and minimize forend mounted items unless you absolutely have to have them. If you are using the rifle for a middle of the night home protection gun, a flashlight makes sense. But get it into the least likely position to catch on a door frame or impede a sling or get disconnected.

For that matter – plan accordingly. Are you really using a three point sling in your home in the middle of the night during a break-in? You’re not.

That’s the same argument for a suppressor. Get one if you’re inclined to do so and can do so with just a tax stamp (check your state laws, and do a deep dive to understand your options). Why? And how did an article about minimizing your rifle’s footprint for enhanced capabilities get to the point where it’s recommending a tax stamp purchase? While you’re at it, SBR your rifle, because 90% of the time you will want something smaller, even if it’s two inches smaller for OAL and mobility purposes.

Here’s why: if you want to be able to move fast and not snag on things – minimize distractions, maximize versatility and forget about the things that will cause you performance anxiety. In the middle of the night, if you have to shoot a defensive threat – your ears will have major issues. Who is going to be ready to strap into a sling, and put on a pair of ears, and then go explore where the intruder is in a house full of 48” hallways, when your rifle is 39” and you also have to fit in the hallway with the rifle. The more mobile you are, and the less worried you are about having to pull the trigger during an adrenaline filled moment, the better off you are. The ability to negate second guesses about your capabilities is incredibly important.

Is it practical for everyone reading to consider an SBR and a suppressor? No. Of course, this is mostly to get into the mindset of how to prioritize components and accessories, so that functionality and capability are the only thing that matters. Additionally, it could help you feel better about what the regulations are, if you do a bit of your own research on the process for the tax stamp, in case you might entertain the idea in the future.

What will you realistically use for the process you are about to engage in? If you are going to be shooting at 600+ yards with your new 6.5, a glass optic and a bipod are realistic. But if you are using your gun as a home defense gun, put the optic in the safe and leave the mounts alone, on the rifle (or depending on your setup, remove all ancillary mounts and parts). You don’t want to complicate what is likely to be the most important scenario of most people’s lives – the moment when you have to make a life or death decision about what to do and a firearm is involved?

A flashlight makes sense. But it probably doesn’t make sense to mount it on the side of an add-on rail, on the already large handguard, with a bulky mount, where it can get knocked off or cause you a problem with movement in tight quarters. 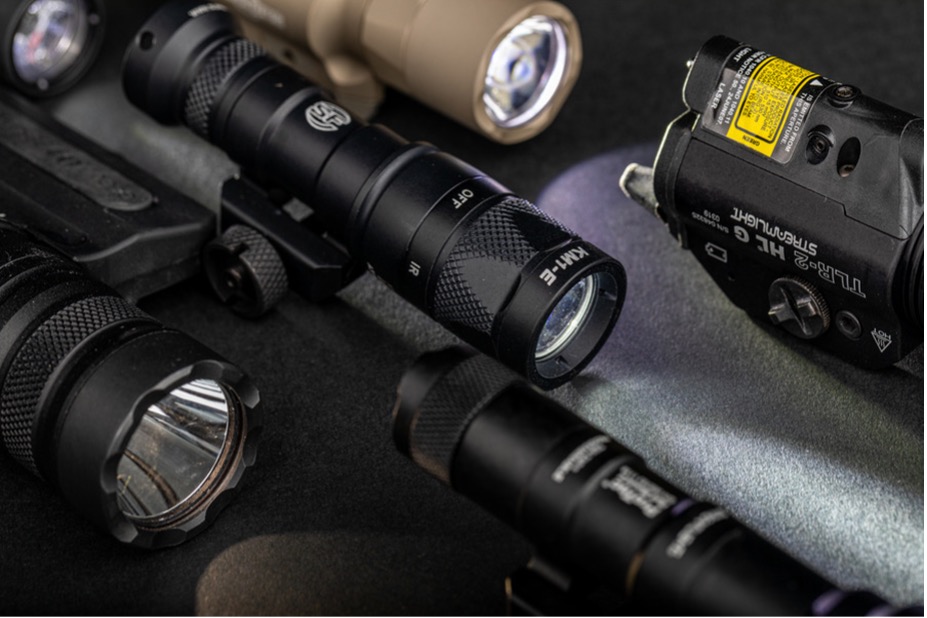 Does a laser make sense? Ever? In the case of having a heads up red-dot or similar optic, it may never make sense. You’ll have to decide that.

How many magazines do you need for a fire fight in your own home? Don’t don the 3 point sling and the mag carrier . By the time you’re strapped in fully, your home invasion may be over with sub-optimal results. Be able to react quickly, with the proper gear. That means having overkill  builds in mind, and thinking about it from a comprehensive perspective may not always make sense.

What are the no brainer fundamentals that must be adhered to 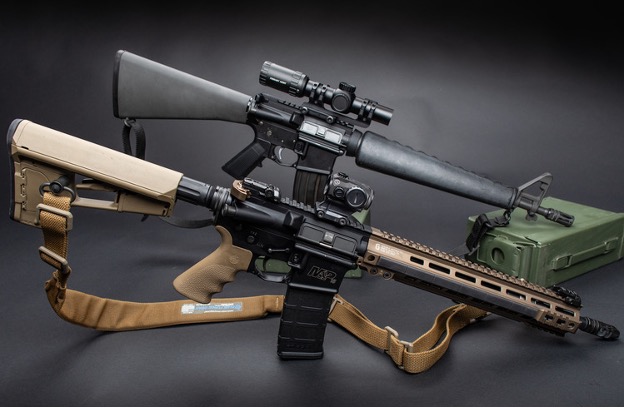 A Suppressor. If you can justify the tax stamp, the background check and the idea of it – it can be one of the greatest game changers for many applications.

Proper backup iron sights – made with a material that includes iron in its metallurgy.

A low profile heads up optic with a quick attunement red-dot or similar.

Special note: remove the excess rails that are bolted to your firearm if you want to achieve more mobility and easier handling. Just because it was purchased doesn’t mean it has to be used full-time. Put it in place when needed, and go minimalist all other times.

Ok, fine, let’s go a step further – forget about being minimalist – all the politics about what you think you like go out the window when it’s a life or death defensive scenario. Who cares if you needed a laser to put lead on the target if that’s what it takes. What matters is you stopped the threat efficiently, before you got incapacitated.

Be realistic with yourself. Who cares if some author or publication thinks, if it causes you to lose the fight?

Someone who cannot physically handle the recoil of a .44 Magnum is better served with a lesser cartridge. Sure, the stopping power goes down,, but the ability to defend and the confidence level increases to superhero level. If you cannot see in your home after 5pm without a flashlight, put a flashlight on your minimalist build – if you cannot tell who you are shooting at, you aren’t effectively defending yourself.

If you have an issue with adrenaline and you need a backup to help you stay on target, a laser may make sense.

If you feel like you need some hard core caliber or cartridge to stop a person, despite the risks of shooting larger caliber rifles in the urban neighborhood, then you sort out the issue later. That’s not irresponsible – it’s real talk. If you are certain that you will need to put a threat down in a single shot because of “X” then you need to ensure you have the firepower and the training to hit what you are aiming at, and drop it in a single shot. Period.

In the end, no matter what an article tells you – do what is necessary, even if you’d genuinely like to build a minimalist solution for defensive situations. No one but you could possibly know what you need to feel competent and deliver on needs in a real world, real-time situation.

But never, ever forget how important knowing how to use your firearms and training with them can be. And, even though the simplest option usually makes the best sense – do what is necessary. Nothing less than that. That is what minimalism and “low drag” is all about.

In a world where everything exists to enhance your AR, you have choice – lot’s of it. But you could also choose restraint.