You are at Home Gear CHOCOLATE – Is it a junk food or survival food?

CHOCOLATE – Is it a junk food or survival food?

“Chocolate is a junk food.”
— A CUSTOMER IN A HEALTH FOOD STORE
“Chocolate is an ideal survival food.”
— A MOUNTAIN CLIMBER
“Montezuma believed that chocolate was the food of the gods.”
 AN HISTORIAN

By Christopher Nyerges
[Nyerges is the author of “Guide to Wild Foods and Useful plants,” and about a dozen other books on ethno-botany, survival, and self-reliance. He has been teaching survival skills since 1974. He can be reached at www.SchoolofSelf-Reliance.com, or Box 41834, Eagle Rock, CA 90041.]

A woman I know was standing behind me, watching me try to select chocolate at a store. “Chocolate?” she asked me. I didn’t realize she’d was watching me. “Why are you looking for chocolate? I thought you only ate health foods. Chocolate is a junk food!”
Was she right? Is chocolate a worthless food, something to be avoided? 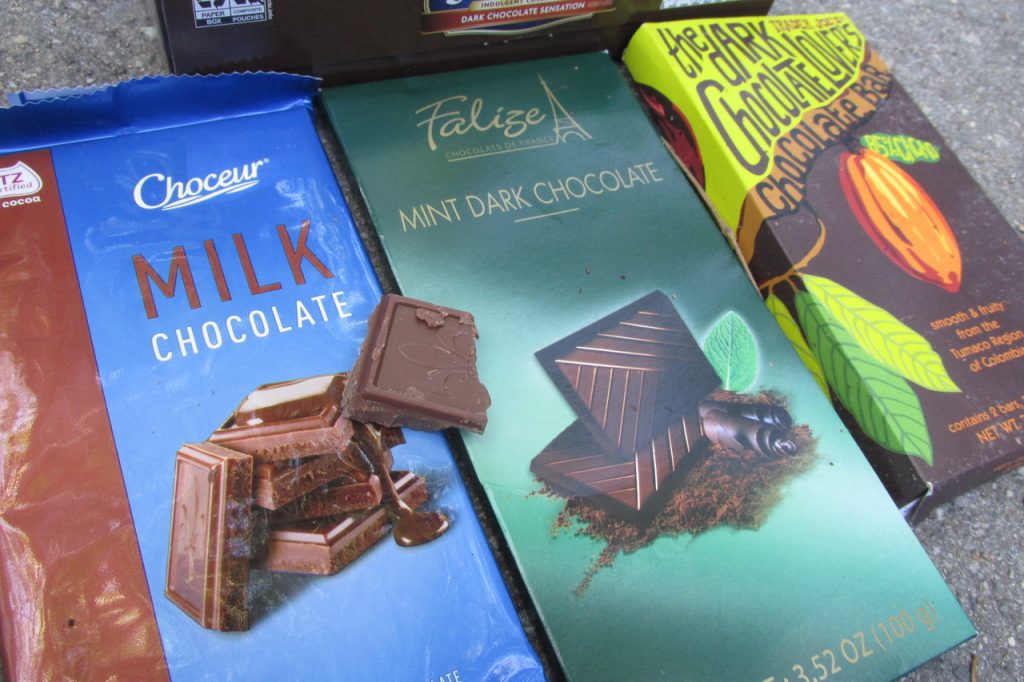 The chocolate products that we can buy in the U.S. range from poor, to acceptable, to good, to best. The “best” (nutritionally) are those which contain the most cacao, the so-called “dark” chocolates.

WHAT EXACTLY IS CHOCOLATE?
Chocolate pods are produced on a smallish tree, grown and harvested in a region 20 degrees below and above the equator. The pods – maybe a foot long – contain white beans. Once picked, these beans are allowed to ferment for a few days or longer, whereupon they take on their characteristic chocolate aroma and brown color.

Once dried, the beans are then exported and typically processed with modern machinery. However, it is certainly possible to process your own, as it’s often done today in Mexico.

During the normal manufacturing process, the beans are first “conched,” which means that heat and grinding pressure are applied to produce a thick liquid called chocolate liquor. When this chocolate liquor hardens, bitter — or baker’s — chocolate results. This is indeed bitter – and most people don’t care for it since it has no sweetness.

When this baker’s chocolate is then subjected to great pressure, both a liquid and solid result. The liquid is cocoa butter, and the solid is cocoa. Cocoa butter added back to baker’s chocolate in greater amounts results in bitter-sweet, semi-sweet, or sweet chocolate, three more grades or types of chocolate. The addition of milk creates milk chocolate. Sugar, vanilla, and various other ingredients are often also be added. 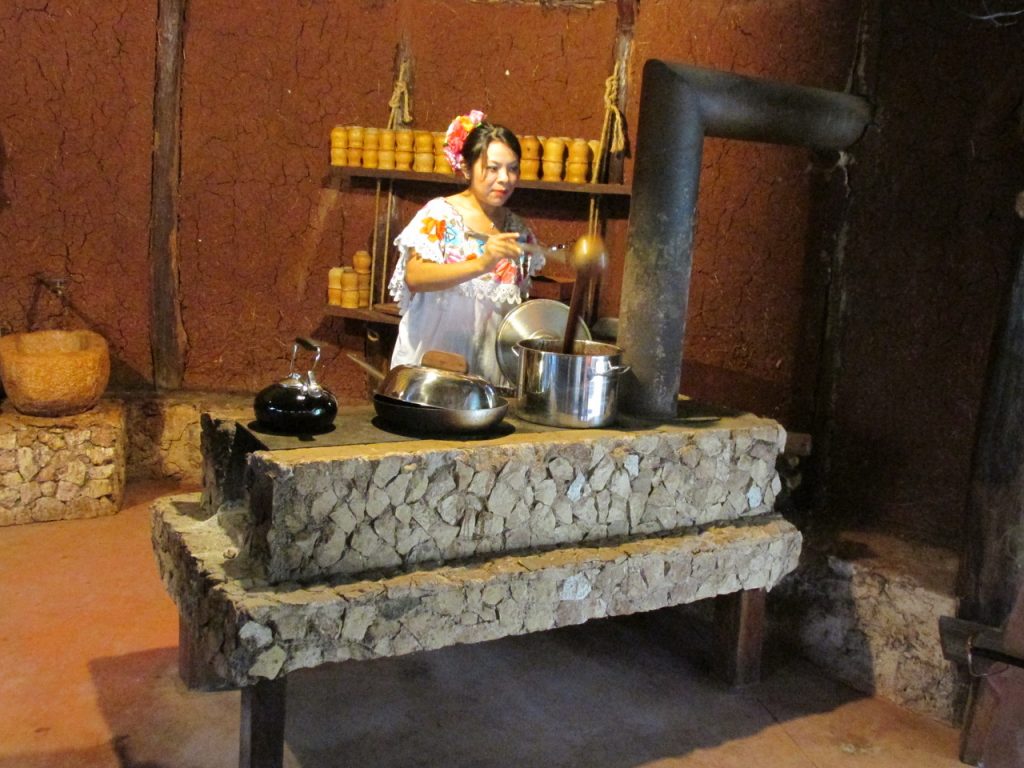 This woman demonstrates how to make a tasty chocolate drink –with no white sugar – using traditional methods. This workshop was next to a farm that grew the cacao plant and other tropical foods in Yucatan.

For example, some of the “designer” chocolates can have hot chilis added, as well as a great variety of nuts, raisins, and even dried fruits.

“White chocolate,” however, is really a misnomer. If a product contains no cocoa, it’s simply not chocolate! Cocoa is the sine qua non of any true chocolate product. So-called white chocolate is made from the cocoa butter, but because it contains no cocoa, it is technically not “chocolate” at all but what I call “bogus chocolate.” And, in some cases if they didn’t even use cocoa butter, but just some cheaper oils, it has no business being called any kind of “chocolate.”

Since there are so many factors from start to finish, no two chocolate products have exactly the same properties. In other words, when you try to answer the question “Is Chocolate good or bad for me?”, you cannot do so without precisely defining what you mean by “chocolate.” Is it even remotely possible that chocolate might have some redeeming qualities? Fortunately, when you read medical studies of various “good” or “bad” effects from chocolate, they usually tell you what type of chocolate was fed to the test subjects, and in some cases, the brand of chocolate as well.

Certainly, chocolate is fattening if you consume a lot and are sedentary. A small 12 ounce candy bar typically contains about 220 calories.

The raw bean does contain high amounts of theobromine and caffeine, but these oil-soluble stimulating alkaloids are largely lost during the processing. An average ounce of bittersweet chocolate contains from five to 10 mg. of caffeine, compared with 100 to 150 mg. of caffeine in an average cup of coffee. 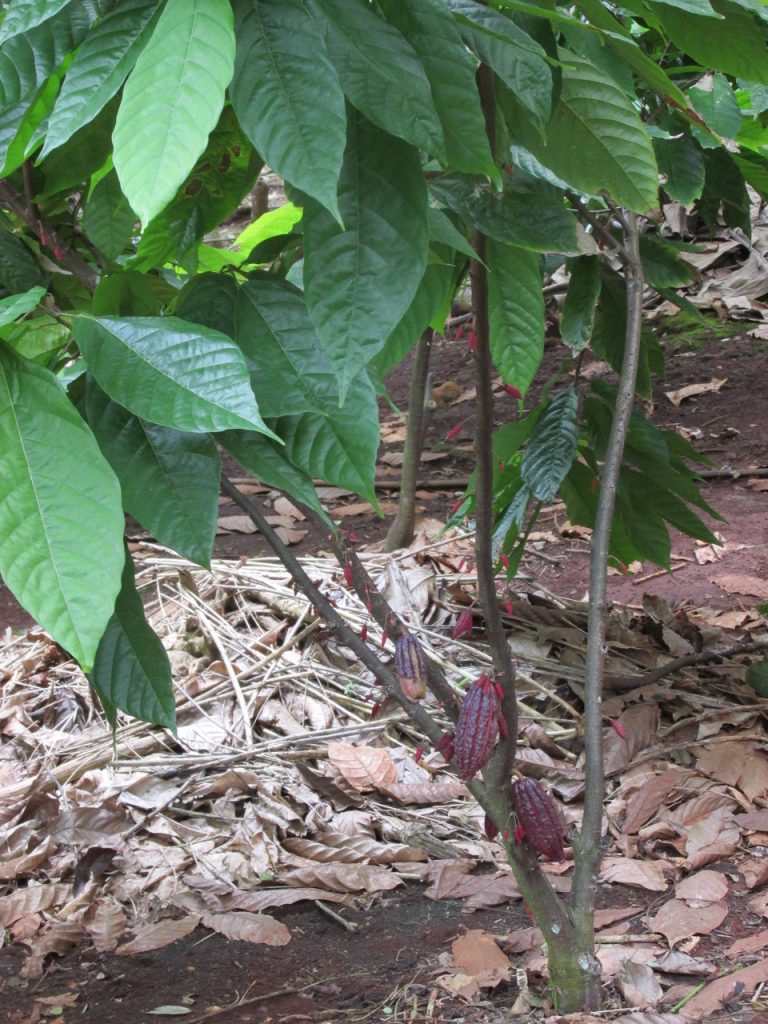 The plant which produces the cacao pods

So what about cavities and acne — two often-cited results of chocolate consumption?

As for cavities, at least three separate research centers have revealed that the cocoa powder within chocolate contains a substance that actually inhibits cavities.

THE BAD
The culprit in this case is not chocolate, but sugar. Sugar is clearly is a cause of cavities. Milk chocolate, for example, contains 55% sugar by weight. And most often, chocolate is made with “white sugar,” which is the cocaine of the food industry. White sugar is a foodless “food.” In most cases, the worst thing about chocolate is that it contains so much white sugar. Most commercial chocolate products list white sugar (in any of its various guises) as the primary ingredient.

One way to sidestep the detrimental effects of so much white sugar in chocolate is to make your own chocolate products by mixing cocoa (or bitter or baker’s chocolate) with honey, or other natural sweeteners. There are a few commercial chocolate bars which contain no white sugar, but these are not yet common, and cost up to three times as much as others with white sugar.

HARD TIMES BARTER
Talk to anyone who’s lived through hard times and they’ll tell you that certain basic commodities were hard to get. This usually includes such items as coffee, sugar, tobacco, alcohol, and yes, chocolate. These might seem like vices, but chocolate is the best of the batch, and you’d be able to trade chocolate for other items you need. After all, who doesn’t like chocolate?

Unless you live in the Tropics, you won’t be growing your own chocolate. Stock up and store it in a cool dry place. Don’t store it high up in an uninsulated cupboard. I learned that the hard way. Once during a heat wave of 100 + degrees f., I found that all my chocolate had melted. At the time, I’d been storing chocolate nibs in glass jars, so I was left with a block of solid chocolate in each jar. IF you purchase the unsweetened nibs (a good choice), store it in a solid container and keep it all wrapped. Store it in the basement if you have one, or in a low spot (remember, heat rises).

The unsweetened baking chocolate is perhaps one of the best ways for chocolate storage. It will keep the longest, and since it is unsweetened, you can melt or shred it and use it any way you wish. The unsweetened blocks are also of a uniform size, and are ideal for trading.

If you don’t want to bother with the unsweetened chocolate, 85% cocoa would be a good next choice in the sense of versatility and trade value.

THE UGLY
The more common chocolate bars often contain more sugar than chocolate. That’s OK if that’s what you like, but because of the high sugar content, you’ll get the good with the bad. And some people might want a quick sugar rush in certain emergency situations.

Chocolate, properly stored, lasts almost indefinitely. In time, it develops a white coating, and gets harder, but is still edible.

So we now know that it’s the sugar, not the chocolate, that’s the cause of chocolate’s sometimes-bad reputation. Is there anything good to say about chocolate? 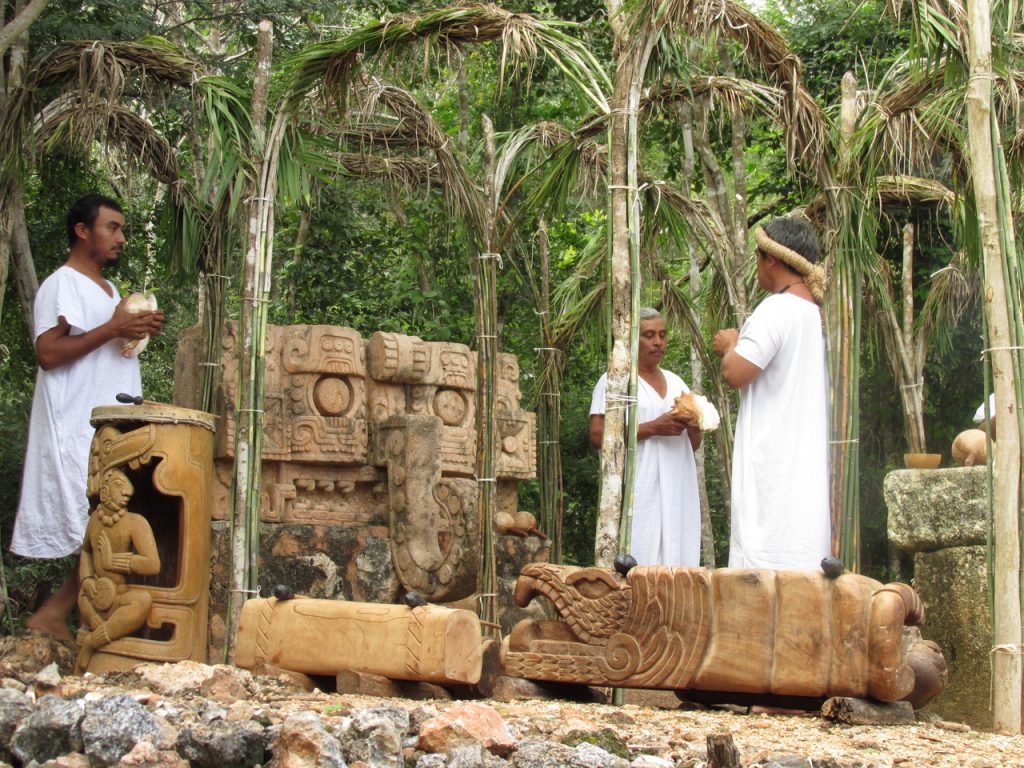 A view of a Mayan chocolate ceremony in Mexico.

THE GOOD
Ninety percent of the cocoa bean is digestible, comprising 40% carbohydrates, 22% fat, and 18% protein. Chocolate contains substantial amounts of vitamins A, D, B2, as well as vitamin E and K, calcium, thiamine, riboflavin, iron, phosphorus, linoleic acids, and phenylethylamine. For a food that is often regarded as a junk food or pleasure food, it’s really pretty good for you!

A study conducted at the Harvard School of Public Health indicated that people who eat from one to three chocolate bars a month live almost a year longer than those who do not eat chocolate.

In fact, chocolate is a quickly-assimilated nourishing energy food. Chocolate was taken on all of the American and Soviet space flights, onto all modern battlefields, and it was taken to Mount Everest on the Hillary expedition. Chocolate goes with many backpackers, hikers, and hunters on their field trips.

It might also be a good item for your food storage, and for possible barter.

Though I didn’t have the time to tell the woman in the store who was watching me buy chocolate this whole story, I did give her a short version.