You are at Home News FedEx/TNT Cancels Australian Firearms Industry

As of July 7, 2021, a letter from FedEx Express/TNT shows that they have decided to cancel shipping for the entire Australian firearms industry. This decision has again put a blow to the essential firearms industry in Australia.

Over the past 30+ years, TNT has been the major provider of freight services to the Australian firearms industry and starting August 9, 2021, services will cease. In March 2021, SIFA (Shooting Industry Foundation Australia) was reassured that long-term accounts were NOT under threat and that FedEx/TNT would continue to provide them with freight.

Fast-forward 3 months, a letter from Matt Daniels, Managing Director – Sales for FedEx/TNT has advised Australian firearms businesses that, “As we progress with FedEx-TNT integration, we are continuing to align TNT operations and transportation policies to FedEx Express. Effective from 9 August 2021, we will cease the transportation of firearms, weaponry and ammunition in both our Domestic and International networks.” 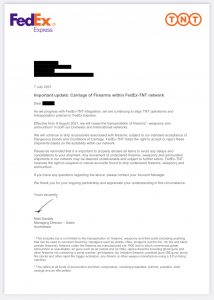 One main concerns that I see in this decision is, TNT is suppose to be “aligning” with FedEx Express policies. FedEx Express currently will transport and deliver firearms as defined by the United States Gun Control Act of 1968, between areas served in the United States…so why not Internationally? As of early July, some states in Australia have made it to where NERF Guns will be registered as FIREARMS and Gel Ball Guns (Airsoft) have already been banned in 4 states.

It appears that with this new blow to the Australian firearms industry, weapons and ammunition will eventually cease to exist and makes you wonder how much longer will it be that all firearms will be banned there. With the rise of power with Animal Rights Activists on the island, don’t be surprised if hunting will be banned within in the next 5-10 years.

This is only the beginning folks. I fear that this will continue globally and eventually make its way here in the United States. Please take note of what’s happening now, prepare yourselves, and voice your concerns!

This is a developing story and will update as more information becomes available.