You are at Home Featured FORAGING MARYLAND, VIRGINIA, AND WASHINGTON D.C.

Folks our writer Christopher Nyerges has done it again with his latest Foraging Book “Foraging Maryland, Virginia and Washington D.C. I have know Christopher for many years and as Epic Tactical & Survival is located in the Carolina Mountains, we are elated he finally come out with a book on Foraging this part of the US. In conversation, we asked him to write up a spot about the book and we will share it with our readers.

Nyerges has been teaching classes in ethnobotany since 1974. This is his 22nd book, and his eighth Falcon guide. More information at www.SchoolofSelf-Reliance.com.

Released September 1, 2022, this latest book by Christopher Nyerges covers generally the Eastern seaboard, and specifically the areas radiating from the U.S. Capitol area. And since many of the common wild edibles are literally found all over North America, a good portion of the book is useful anywhere in the country. 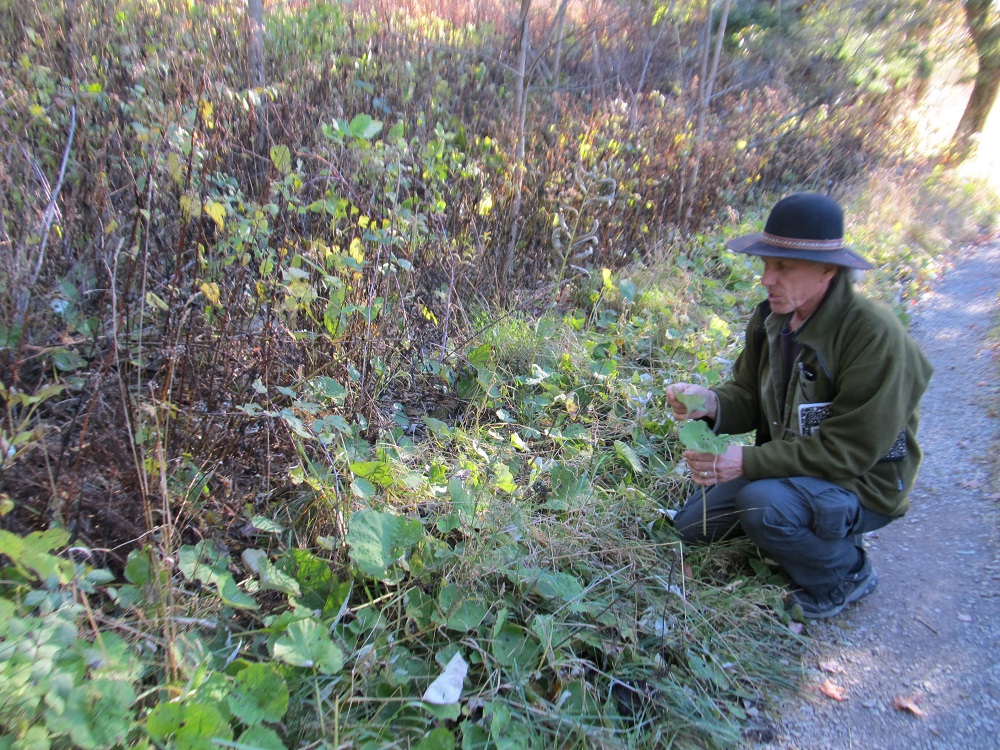 The idea for this book came when visiting my brother in Alexandria, Virginia. Helen and I were there for a wedding, and we also spent time at the museums in Washington D.C, and went to Shenandoah, and many of the sites in the area. Helen suggested that I consider writing a book about this part of the country. Though I live in California, I had spent a six month period, and many summers, living on my grandfather’s farm in northeastern Ohio, studying the Eastern Plants. Many of the plants that we were now seeing in the greater Washington D.C. area were very familiar.

Before their trip, we both reached out to museums and bookstores, to offer workshops while we were in town. Almost by chance, we contacted Malcolm McNeil who is a naturalist and historian who works for the Huntley Meadows Park, a large natural area in Fairfax County, Virginia.

Helen and I went to McNeil’s park and gave a talk to his students, and took them on a botanical walk of the park. This was when we both realized that McNeil might be a good collaborator on a book of the area. 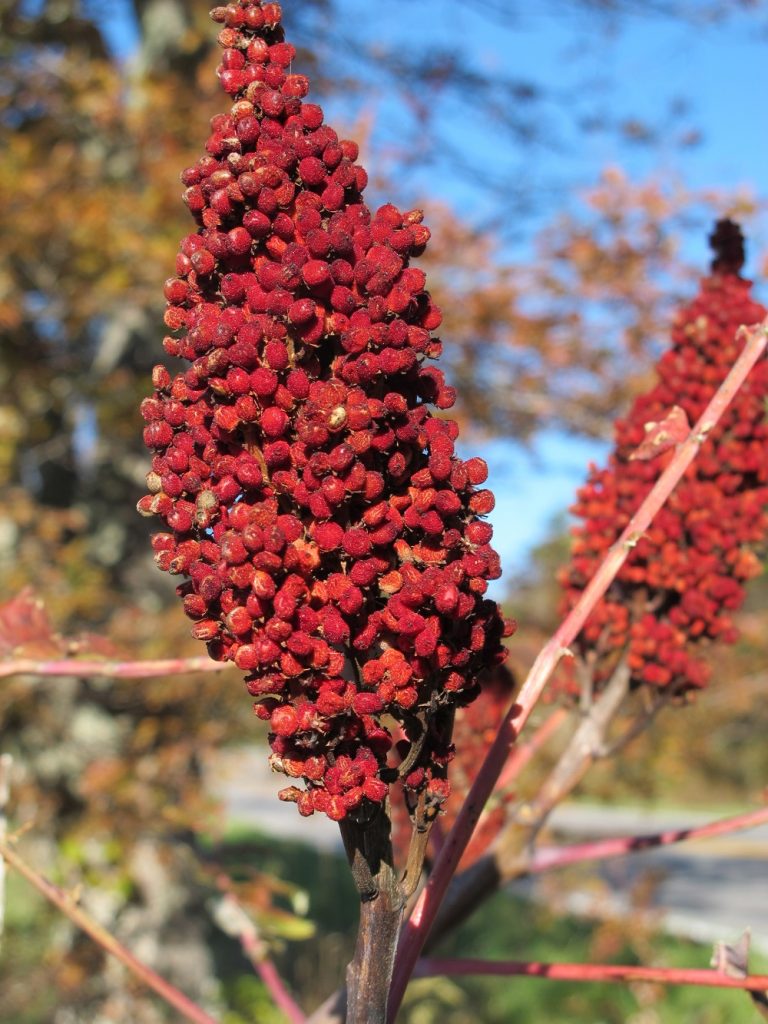 The conspicuous fruits of the staghorn sumac.

Once back home, and the publisher expressed a positive reaction to this book, we set about the long process of the organization and writing of the book. Malcolm McNeil was instrumental in choosing which plants to include, and which might be too marginal. In an ideal world, we’d like to include every single plant in the wild that might be useful, but in the real world, I knew there would be a limit of book size, and number of photos, and so we set about creating a book that would be the most useful to the most people.

We have at least 65 plants included, and discussions about many of the Plant Families that are entirely, or mostly safe.

The book is fully illustrated with color photos by Christopher and Helen Nyerges, Malcolm McNeil, Rick Adams, and others. Malcolm McNeil wrote the forward, and bits throughout the book.

244 pages, with descriptions of how to use each plant.

If you’ve ever lived in this area, or visited, you will recognize many of these uniquely “Eastern” plants such as pokeweed, milkweed, sassafras, witch hazel, goldenrod, and coltsfoot. 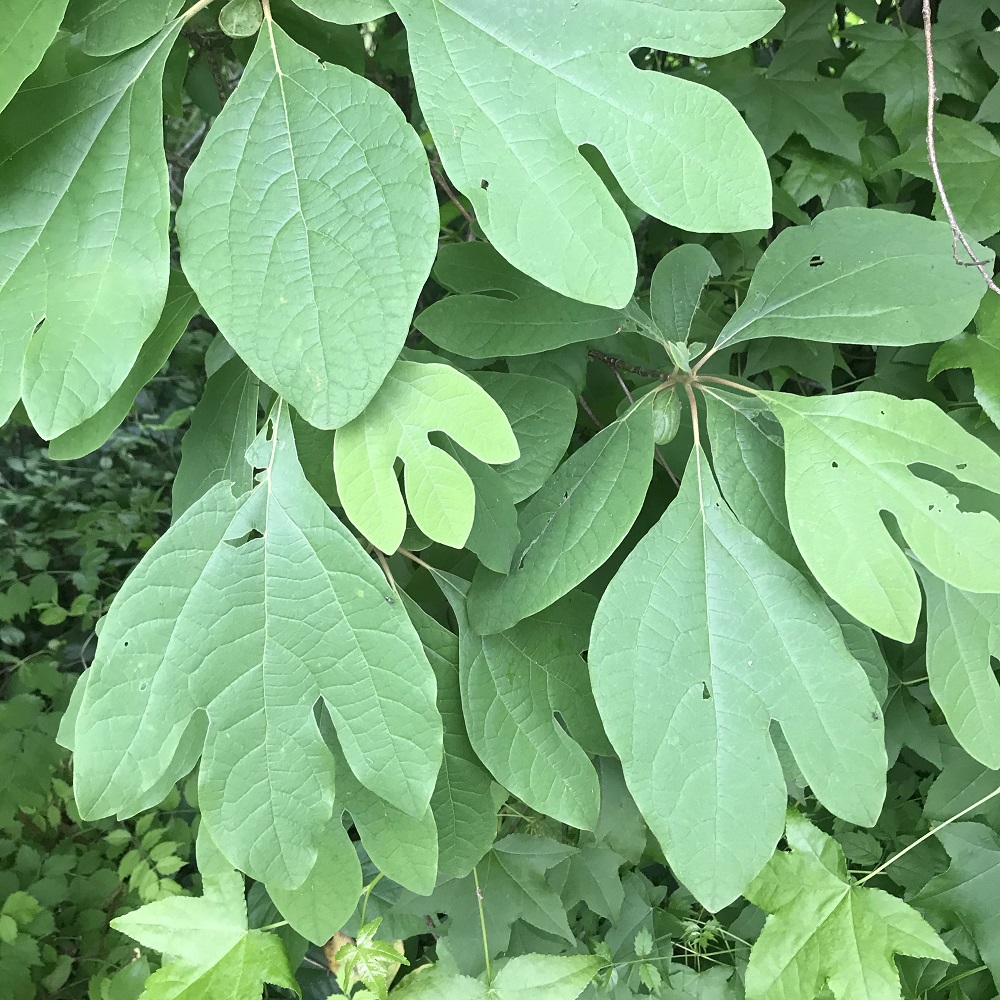 The sassafras leaves look like mittens.  Photo by Malcolm McNeil

I point out, for example, how Tony Joe White created much confusion about eating Poke with his 1968 song, “Polk Salad Annie,” about a woman who eats Poke. “Salad” suggests you can eat Poke raw, but you can’t! You must boil the greens a few times to make them edible. White should have called his song “Poke Sallet Annie,” since “Sallet” refers to cooked greens. Poke greens have been enjoyed in rural communities for generations!

You’ll also learn about the tasty roots of sassafras, a tree or bush that is very common in the east, and, despite the presence of safrole (banned by the FDA because of its carcinogenic effects), sassafras tea and gumbo from the leaves has been used widely for centuries as best as we can tell. It’s very easy to recognize the sassafras plant, and this book will show you how. I used to dig the roots out of ditches in the back of the family farm in order to make sassafras tea.

Coltsfoot is also included, a plant I learned when living on my grandfather’s farm in eastern Ohio. Though coltsfoot is a marginal food, it’s a useful medicinal plant, and a good nicotine-free smoke.

And you can’t miss the colorful staghorn sumac if you live anywhere in the East. I share the simple details that I have learned for making a great lemonade from this plant.

This latest foraging book is great if you live in the target area, but also very useful for anyone in surrounding states including North Carolina, Tennessee, Kentucky, West Virginia, Ohio, Pennsylvania, and even New Jersey.