You are at Home Featured GET A GRIP PEOPLE!

GET A GRIP PEOPLE!

Turns out RYKER USA is the first to market the SIDE MOUNTED GRIP with a Patient, with basically states they own the side of the rifle when it comes to a hand grip.  Amazing feat if not impressive on its own, it is not a VFG (Vertical Fore grip) and is not in the VFG category, the category is THE RYKER GRIP, the benefit they got by being the first to market, where they got to name the category.

The GRIP has  been on the market for about 18 months, from prototype to production. Ron said the GRIP has over 2 years in combat in 5 countries with all the top special operations commands and government agencies using it. Additionally, they are a NTOA (National Tactical Officers Association) tested and recommended product.

Ron went onto say they have a dozen SRT/SWAT teams running the grip across the country. Two of the LV Metro SWAT Snipers use the RYKER GRIP and set a course record for speed and accuracy on a 150 meter unsupported standing 20 round course of fire, at a LEO only Sniper competition.

Meeting Ron Holmes out on the range in North Carolina, this dude’s a unique character and a retired Marine Corps Master Sergeant  who served in Force Recon.  After a bit of easy install it was time for some lead therapy and seeing how this thing works.  Doing a bit of running and gunning you at first feel totally out of your wheel house and start to question the GRIP.

Based on how we were trained in the military (Marine Corps for me) then our years of post service contract work or general range time, we have all developed the muscle memory and with that all I wanted to do was go for the standard grip i’ve used for decades.  However, after several minutes you find that using the GRIP allows the shooter to remain in an athletic stance that mirrors when shooting a pistol. The grip gives the shooter the ability to fix something we all have been taught incorrectly for 100’s of years. It gives you commonality of movement and position between pistol and rifle.

Traditionally you would shoot a pistol in an aggressive isosceles stance but moving to or from your rifle you would change your upper and lower body to a cramped and slightly bladed position. The RYKER Method of shooting removes that step and allows you to keep the same body position when shooting two weapons systems.

By placing the hand on bore access you open the shoulder, which instantly improves circulation, and reduces if not eliminates fatigue. This allows the shooter to pull the rifle back into their strong side shoulder. This motion almost completely eliminates RECOIL. 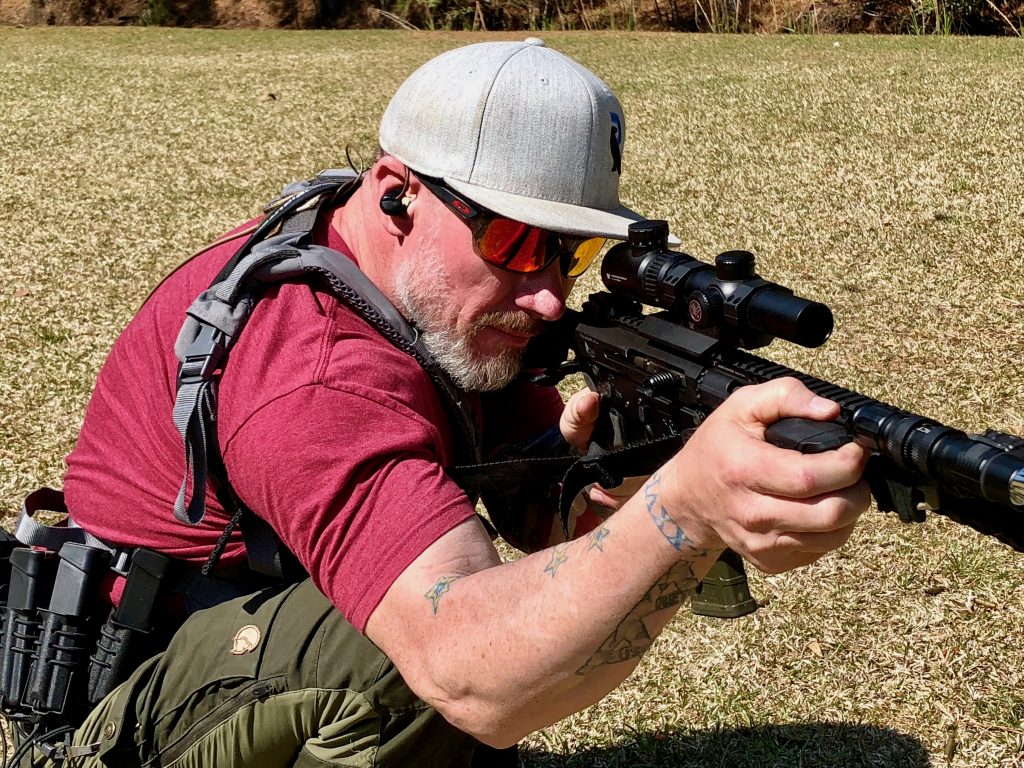 Ron was insistent that with the higher the caliber, the heavier the weapon and or full auto, you will recognize the benefits of the GRIP instantly.  He said, you’ll see some Marine Raiders and some Green Berets running the grip on the SAW. Look at the barrel and you will notice it remains flat and stable, no muzzle rise!

As we all know, rifles get hot, if you are going from your 3d mag to your 4th even with a glove and a traditional method of shooting, you are going to recognize the HEAT.  So much that you will be thinking about it and not focusing on your fundamentals of marksmanship.  A benefit to the RYKER GRIP is No GLOVE No HEAT; it completely removes you from the heat.

The RYKER GRIP gives you all the benefits of why people use the Thumb over or C Grip and completely removes the disadvantages; heat, over rotation of the elbow, collapsed shoulder, fully extended arm, all restricting upper body mobility.

Spending the day with the GRIP I have to say, I felt faster with the it, then without. I felt my accuracy was maintained, in fact even improved.

When I said this to Ron, he was more than happy to let me know they had 20 shooters with a variety of backgrounds; Special Operations, Law Enforcement, Competitive Shooters, and Absolute beginners. The average was a 14% increase in speed. Imagine that with 20 tier 1 special operations guys. 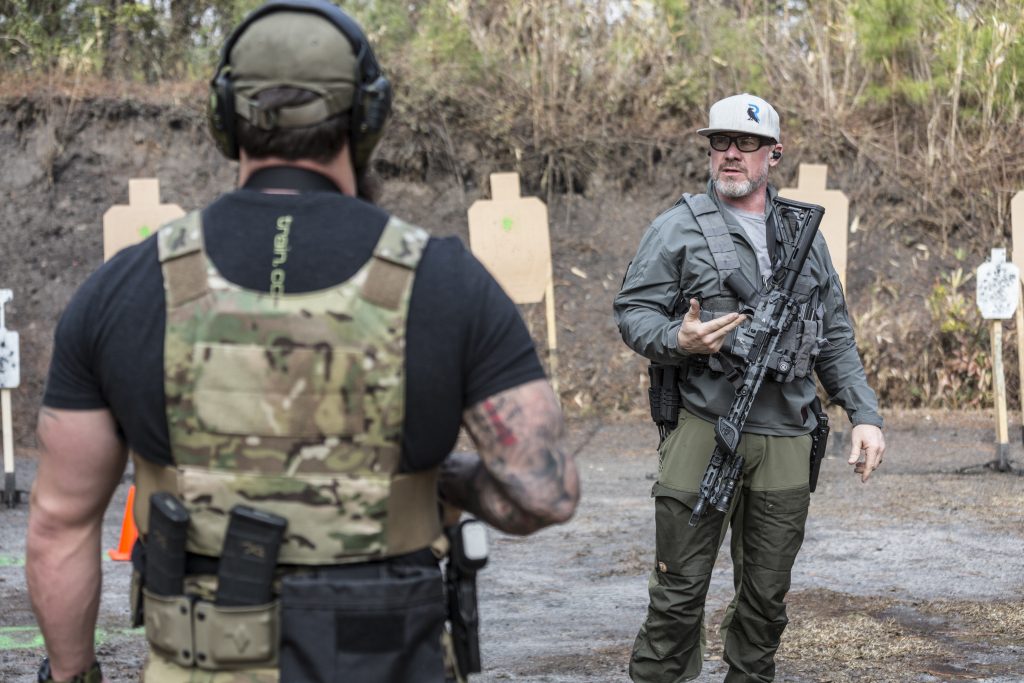 I think my biggest questions to Ron was why? Why and how did you come up with this idea for the GRIP? (Ron) The RYKER GRIP was initially invented for pain management. We have found shooter with existing neck, shoulder joint ailments using the RYKER GRIP does not aggravate them. Along the way we felt like we were faster transition from target to target. This prompted us to consult some SOCOM MD’s, a PHD Biomechanical Specialist, ophthalmologist, Statisticians, and the Engineers that helped us development the RYKER GRIP. So we didn’t just make something and say here buy this. We did our due diligence and put in research before bring the RYKER GRIP to market.

I have to agree with him, this isn’t just some other “thing” for your AR, but if you have a side mount capability on your rifle (AR, AK, Shot guns, SAW’s, etc) this is a seriously solid product that will make a difference with your  speed and accuracy when shooting.  It that matters to you, then you need to get a GRIP! 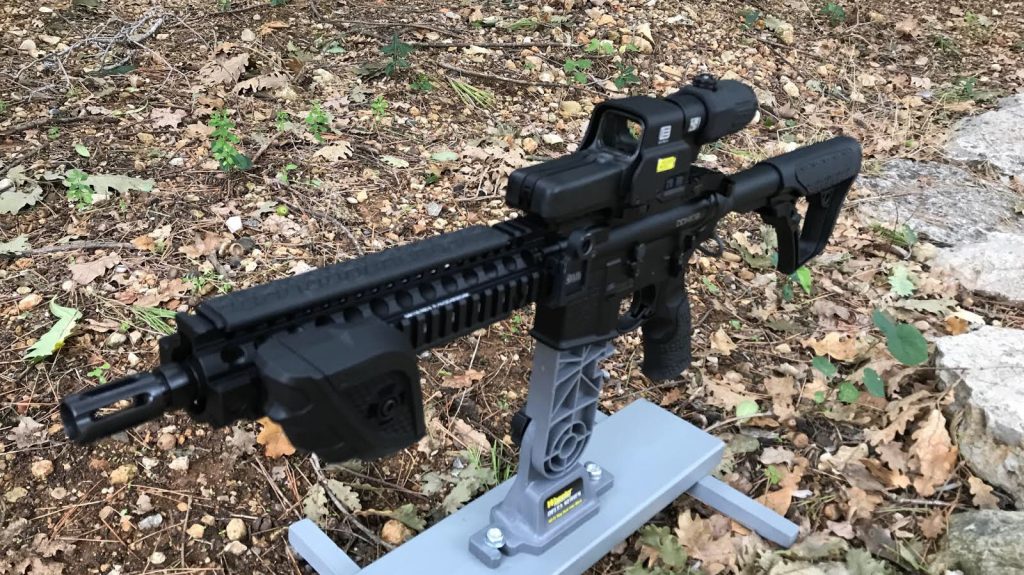