You are at Home Pistol Hk P30: The Best Feeling Handgun On The Market?

Hk P30: The Best Feeling Handgun On The Market?

The West German small arms company that has been around for over half a century certainly has figured out the secret to producing some of the highest quality and most advanced products on the market. The name alone speaks for itself (as does the hefty price tag), but people who know their firearms know what they’re getting when they put an Hk in their hands.

[expand title=”See the full article”]
Everyone knows the tried and true Hk USP that made its way into the firearms market in 1993, and proceeded to be used by police and Special Forces all around the world.

The USP is undoubtedly one of the greatest firearms ever produced, until Hk elevated their game to another level with one of their newest additions: The Hk P30.

The Hk P30 brings the quality, dependability and ruggedness of the USP to the table, but also has and updated, sleek new design. This fresh design by Hk has sharp edges attributable to the modern style of most new-age handguns. And when you place it in your hands, you’ll feel like a father holding his newborn for the first time.

The box-like USP doesn’t stand a chance against this beauty. The P30 has a completely customizable grip with interchangeable inserts and lateral plates on the back and both sides, allowing for each individual shooter to find his/her perfect grip. The majority of other handgun manufacturers (Glock, S&W, Springfield, etc.) only allow for the back strap to be switched out from small to medium and large. The finger grooves at the front of the grip seem perfectly placed and put the finishing touch on the P30. 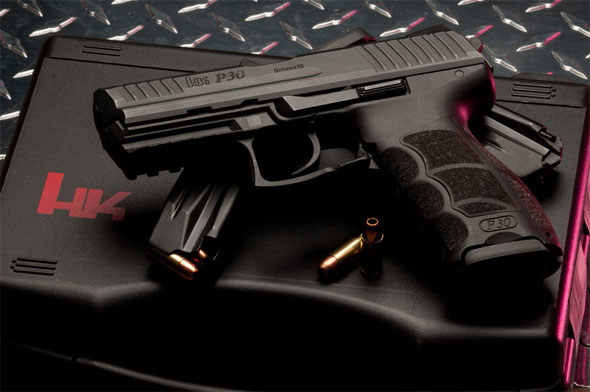 The trigger of the P30 is a standard double action and exposed spurred hammer that Hk is known for with the USP. The trigger is a gem – smooth and long on the first tug, as with most double actions, and then evens out in the second with the single action. And with an almost completely customizable grip, you can adjust it to fit your hand and trigger reach.

A standard Hk safety can be found the P30 along with an ambidextrous decocker that is located next to the hammer, as well as the ambidextrous slide release. The 15 round magazine (9mm version) provides this comfortable handgun with an ideal amount of ammunition.

This sleek new design coupled with the tradition of high quality firearms that Heckler & Koch is known for provides one of the best feeling/shooting, if not the best, midsize handguns on the market. There are a few variations of the P30 available in 9mm and 40 cal. The P30 is also available in varying barrel lengths, but one thing that stays consistent regardless of the variations – this is one comfortable piece of polymer and steel. Only the best products from Heckler & Koch! I wouldn’t trade my P30 for the world, she sleeps right beside in my bedside table every night, and joins me on the range every chance I get.

Stop by your local gun shop today and check out their Hk lineup as well as the modern and customizable Hk P30. MSRP for the P30 starts at around $800.

No matter what handgun you decide on, make sure it is comfortable like the P30 and fits in your hand – that’s the most important thing. Purchase a handgun that meets your needs! Safety first and shoot ‘em straight![/expand]