You are at Home Gear HOW TO ORGANIZE FOR EMERGENCIES – Is having a “survival group” a good idea?

HOW TO ORGANIZE FOR EMERGENCIES – Is having a “survival group” a good idea?

[Nyerges is the author of many books, and teaches classes. His web site is www.SchoolofSelf-Reliance.com]

Not long ago, our class was finishing a day-long field trip of practicing outdoor survival and self-reliance skills, and our small group was now sitting around the fire talking. The subject moved to emergency action plans, and what contingencies any of us had in the aftermath of a major disaster.

“So how would all of you ever get together after a major disaster?” one woman asked me. She was somewhat new to the classes, and was well-aware that our small group comprised a broad spectrum of skills, from people who worked to be ethical, socially-conscious, and doers, not just talkers. I could tell she was wondering about how our “group” might actually come together in such a scenario.  She actually believed that this diverse collection of people from all over actually constituted a “group.” 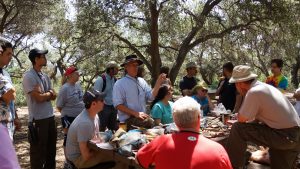 “We probably would have no way to get together,” I offered. “Of course, there is no predicting the future, but if we couldn’t use a car, and couldn’t get gas, and there was chaos on the streets, in the first few weeks, we’d almost certainly have to stay put wherever we’re living.” My response pre-supposed a serious disaster where all social services would be disrupted.

I’ve long recommended that people get to know their immediate neighbors, because they are your “family” in the aftermath of a major disaster, like it or not. Think global, as the saying goes, but act local. Enroll in local CERT training, and be active in Neighborhood Watch.

The woman then asked me, sort of a question and comment combined, “Well, don’t you have a tight survival group of people who would all come together in an emergency?” I knew she was thinking of how she might organize such a group where she lived, and I knew that she believed I have organized, or been a part of, such a  secret or public “group.”  She probably assumed I had a hidden underground bunker somewhere.

I live in the northern section of Los Angeles County. The mountains are immediately to my north, but otherwise there is urban sprawl and freeways in all directions.  In our class that day, the woman asking the questions had driven about a hundred miles, from San Bernardino County from the east. Three people had come over a hundred miles, from the high desert. One other person was local, and the rest lived between 30 and 45 minutes by car from me. We were all spread out. There was no way that this diverse group would ever come together in the sort of disaster (and end of the functioning of normal society) that she was envisioning.

I explained that I have worked with many “groups” over the years, often with the focus of working together to survive a disaster.  “Your best bet is to work with your own family to make each person strong, healthy, and self-reliant,” I told her, “and to work with your local community to improve things.”’ 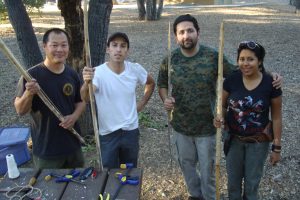 In the planning sessions of which I’ve been a part, there are always “great ideas” from everyone, and countless scenarios are discussed about what might occur. However, in the real life, things never go that way. Any “group” might have one natural leader, even though there is an appointed or elected leader. That’s a problem. Sometimes the elected leader is not the natural leader, and so the group fractures or dissolves.  There are also lots of lazy people, people who want to be a part of something but who are more talk than walk. Lazy and idealistic people have spelled the doom of many an alternative community.

I shared the experiences of a friend of mine who was part of an intentional eco-living community of under 20 people. It was all run very democratically and members would vote for “great ideas” but my friend found that the work required to do certain things was not being done. The group voted for having a dog, and chicken, and rabbits, all of which require daily regular care, and then some. My friend learned that “the group” never does anything – only individuals do work. My friend found that he was the one cleaning up after the dog, emptying the compost, taking care of the chickens, and eventually he left because he got tired of doing everyone else’s work in the supposedly idealistic ecological community.

CAN WE REALLY ALL GET TO A COMMON LOCATION?

Getting back to the woman’s question about the practical aspects of a small tight group getting together after a disaster, what else can go wrong with the “group” that plans to get together? For one thing, the ability to spring into action after an emergency requires the maintenance of physical fitness, and requires at least some level of economic autonomy, and knowing how to live one’s life so that you are, in fact, able to rise to the occasion of a severe emergency. The concept of such a survival group is not a passive concept. In order to be viable, it must be alive, dynamic, and involve regular training of some sort.

So, as a practical matter that I have observed in smaller groups, there is the fact that people like to pick-off the leader, and endlessly criticize. I have watched countless “leaders” whose job ended up being mostly defending the countless criticisms.  Then the members of the presumed “survival group” form groups and clash among themselves, akin to “The Lord of the Flies.” Then some get girlfriends or boyfriends, and they go off into their own world, fending for themselves in the society at large, just trying to seek whatever goal it is that anyone seeks in life. 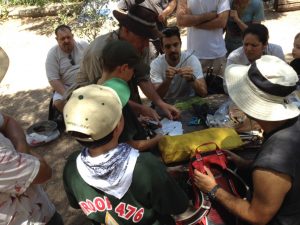 Want to experience the “end of the world”?  Whenever I ask people that silly question, a few always enthusiastically say Yes.  Then, I suggest they move to Syria, or some other country where the sense of a stable economy, infrastructure, and political system are non-existent, where you can expect someone to try to rob or kill you every day.  Slowly, they start to realize that they really have it good in the U.S.

The constant challenges that everyone faces in life requires a never-ending series of choices and changes. Our lives never remain static, and the things that happen in society can always leave us guessing. The idea that we should spend a major, or a large, portion of our time and resources on how we’re going to “start over” in the event of a world-changing cataclysm is something that should be put into perspective.

HERE ARE A FEW WAYS TO PREPARE FOR EMERGENCIES:

Neighborhood Watch is a nationwide program, one of the oldest and best-known crime prevention concepts in North America. In the late 1960s, an increase in crime heightened the need for a crime prevention initiative focused on residential areas and involving local citizens. The National Sheriffs’ Association (NSA) responded, creating the National Neighborhood Watch Program in 1972 to assist citizens and law enforcement.

If you want more information, and to register (not required), you can go to www.nnw.org.

The CERT program was designed as a grassroots initiative and specifically structured so that the local and state program managers have the flexibility to form their programs in the way that best suits their communities. CERT volunteers are trained to respond safely, responsibly, and effectively to emergency situations, but they can also support their communities during non-emergency events as well. There are over 2,700 local CERT programs nationwide, with more than 600,000 individuals trained since CERT became a national program.

Contact  your local emergency manager or FEMA at FEMA-Prepare@fema.dhs.gov

This may be the most viable way to communicate after an emergency. Check out local clubs.

Most urban neighborhoods have gardens. Get to know the growers, and consider being a grower yourself.

Get to know and support your local farms. They grow your food, after all! 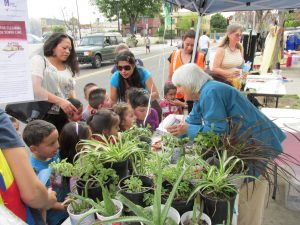 AS-CLASSES-01:  Individuals can meet like-minded people, and learn to organize, at survival skills classes such as this one. Photo by Rick Adams.

AS-CLASSES-02: The Scouting organizations are a great way to learn planning, recon, and survival skills.

AS-CLASSES-03: A group learns primitive trapping skills, which might come in handy in an emergency.  The students also learn to network, and find ways to work together.

AS-CLASSES-04: These students spent the day learning how to make bows, and getting to know each other.

AS-CLASSES-05: Local farmers markets are an ideal way to learn where your local growers are located, and great places to share information.