Ruger has been a staple in the 22LR department for target pistols since 1949. It seemed like a lot of people found that the Mark series of pistols to be a fan favorite due to reliable. With the introduction of the Mark I (MKI) pistol in 1950, it took off like a rocket. The MKI was in production until 1981. Starting in 1982, Ruger started making the Mark II (MKII). The US Navy Seals used a threaded barrel model of the MKII and Ruger also introduced an integrated suppressor model that was used by the Navy as well.  In 2005, the Ruger Mark III (MKIII) was born. The MKIII offered much needed improvements over the MKII to include: Load Chamber Indicator, magazine release moved from bottom of the grip to behind the trigger guard, adjustable rear sight, drilled and tapped receiver to mount a weaver scope mount, magazine disconnect to prevent pistol from being fired with magazine removed, shorter tapered bolt ears, and a smoothly contoured ejection port profile. Ruger has sold quite a lot of the MKIII over the last 10 years. 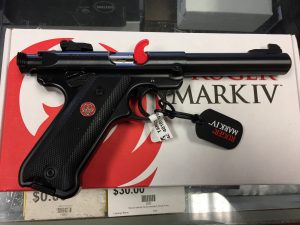 On September 23, 2016, Ruger introduced the new and improved Mark Target Pistol, the Mark IV (MKIV). One of the new-design of the MKIV, that everyone is really excited about, is the one button take down located in the rear under the bolt. If you have ever owned one of the original Ruger MK series pistols, you know that take-down and cleaning of the pistol is a real pain in the butt. The MKIV button take down makes cleaning a breeze. When you press the button in, the top receiver rotates up and easier to remove the charging handle/bolt. 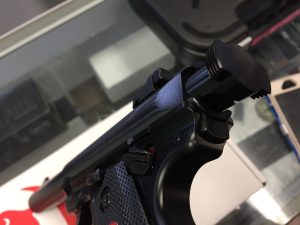 This Target pistol feels really good in the hand. The CNC-Machined aluminum frame makes this pistol feel very sturdy. The controls on the left side (right handed shooters) are really nice. The slide release is located in about the same spot as the MKIII, and the ambidextrous safety is a nice touch. The Mark IV shares a lot of the same features as the MKIII to include: Adjustable rear sight, drilled and tapped receiver to mount weave/picatinny rail (not included), magazine disconnect, same size bull barrel. The MKIV includes two 10rd magazines and comes in either Blued (40101) or Stainless (40103). With an MSRP of $529.00 and selling locally for around $419.99, it makes for a good buy. Scope bases, Fiber-Optic sights, and extra magazines are available from Ruger directly. 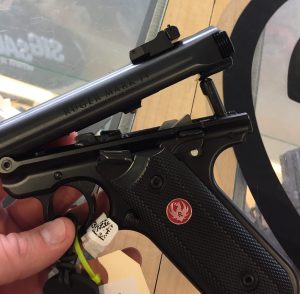 Thank you to Clayton Guns for allowing me to do a table top review of the Ruger MKIV. Contact your local gun shop to see if they have this pistol in stock or can get it in so you can see if it’s going to be right for you.