You are at Home Prepping JAMES RUTHER:  Maker of Spoons, and master of bushcrafting

JAMES RUTHER:  Maker of Spoons, and master of bushcrafting

James Ruther is a diverse man.  Day job, working for the Edison company, he’s also quite an authority on knives and knife-sharpening, as well as several other bushcraft skills.  One day, after we both finished a class about outdoor survival skills in the foothills of Pasadena, Ruther showed me a wooden spoon.

“That’s nice,” I said.  I liked it, and it looked a bit different from the many wooden spoons I’ve seen over the years at thrift stores and novelty stores.

“Yeah, and I made this one,” he continued. 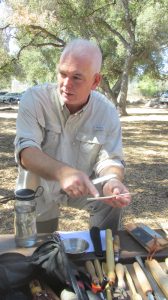 “You made it,”? I replied, looking again more closely at the spoon, turning it over in my hands, noting that the handle was smooth, though irregular.

“Yes,” said Ruther, “and I made it mostly from this knife.”  He pulled out a Mora knife and handed it to me, which I also examined.

Since I’d initially thought the spoon was something cranked out in a factory woodshop operation like so many others that you see at cheap stores,  I paid it little attention.  Now that I knew this was individually carved, I examined it more closely, and saw the character that an assembly line product would not have.

“What kind of wood did you use?” I asked.

“Ash,” he replied. “I use ash for most of my spoons, because it’s so common, and relatively easy to carve. Also, because the ash trees grow like weeds, no one minds if I trim a few branches and use them for making spoons.”

Ruther gave me that beautiful spoon, and eventually I attended a spoon-carving class that he conducted.

Here’s how the class went.

Once everyone is present, Ruther shared the basics of knife safety, and the importance of always handing a knife to another person with utmost care. He also emphasized that you always carve AWAY from your body and fingers. This sounds easy, but sometimes, to get a certain cut, you have to be very creative to not cut towards your body, and Ruther showed many of these methods.

He also described the “blood circle” for safety.  If  you a standing too close to a person using a knife, and that person accidentally moves his knife in your direction,  you might get cut. You’re within his blood circle. To know if you’re too close to someone, Ruther held his knife out horizontally from his body, and defined a large circle, front and back.  If you’re within that blood circle, you’ll get cut.

Next, his class took a short walk to find and collect suitable woods.  Ruther pointed out that just about any wood could be used to make a spoon, even dead wood on the ground, though it’s more desirable to use fresh sound wood. Oak is excellent, but harder to carve. Willow is abundant, and easy to carve, but might be a bit too soft for some applications.  Ruther likes alder, ash, and other woods; that day, his students all collected pieces of ash wood, about a foot long and a few inches thick.

On our way back to our tables, we observed many of the other trees and Ruther described some of their uses. 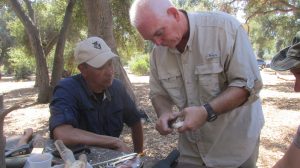 Ruther guided each student to take their section of ash, and to first split it, by batonning it with a sheath knife.  Then, they decided which half would be used, and then the cut part of that piece of ash was flattened with the knife.

Next, the shape of the spoon was penciled onto the flat side of the wood, and careful carving began.

There were various techniques of wood reduction which were shows to take the piece of wood to a spoon.

A saw was then used to reduce some sections, such as the handle section.

To cut away the excess wood which would become the handle, the section would be sawed perpendicular to the handle, at various points, so that the unwanted wood could just be chiseled away.

Then, it was all slow but careful carving. The hollow of the spoon was carved with curved carving knives which made it much easier. However, the hollow could still be done with an ordinary knife, with much more care.  Another method was to place a small coal in the hollow of what would become the spoon. That section would char, and the student would carefully carve the spoon section until the desired shape and thickness was reached. 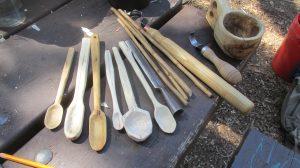 Finally, the spoons were sanded with sandpaper.  Or, as woodscraft master Paul Campbell used to teach, the spoons could be “sanded” with a small rock, abrading little by little until the desired smoothness is achieved.

“What happens if the spoon breaks?” a student asked Ruther.  He smiles and responds, “Oh darn, you’d have to carve another!”  Taking a more serious tone, Ruther says that to discard a biodegradable wooden spoon is not a problem, and is infinitely better than discarding a plastic spoon into a land fill that would take 100 years to decompose.  “It’s smart for the environment,” he says, adding that if you cut from overgrown invasive trees, it’s really a form of weed control.  “It’s always a good thing to learn to make something rather than buying something, and this produce no waste.”

Ruther points out that your second spoon will always be a better spoon than your first, because you’re still figuring things out on spoon number one.

To learn more about Ruther and his classes, he can be reached at ruther1@gmail.com.

[Nyerges is the author of “How to Survive Anywhere,” “Foraging California,” “Extreme Simplicity,” and other books. He also leads outdoor field trips. He can be reached at www.SchoolofSelf-Reliance.com.]