You are at Home Prepping “Leaflets three, let it be”, Getting to know Poison Oak (Toxicodendron diversilobum) and Poison Ivy (T. radicans)

[Nyerges is the author of “Guide to Wild Foods and Useful Plants,” which includes a chapter on poison oak. He has led ethno-botanical walks since 1974.

Poison oak is a widespread vining  plant throughout the western states. It can be found north into Canada, and south into Baja California. The vines can stretch for many feet up and around oak trees, and can sprawl over entire hillsides.  And in the winter, the plant can seem nearly invisible, since it is deciduous and loses all its leaves for the winter.

Poison ivy is much more widespread, found east of the Rockies to the Atlantic coast.

These vining plants are close relatives, both members of the Sumac or Cashew Family  (Anacardiaceae), containing the same chemical which causes the itching rash for which they are so well-known.

Each leaf is composed of three roundish leaflets, slightly toothed on the margins.  You’ve all heard the slogan ‘Leaflets three, let it be,’ right ?  (For the record, poison oak isn’t the only plant with three leaflets, but it is one of the most common).

Botanists have defined sub-varieties of these two as well, but this simple description is sufficient for our discussion here.  I will refer to poison oak because it is so common where I live.

The newly emerging leaves of spring are red, and quickly become glossy green. The leaves remain green through their growing season, and then turn yellow or red as autumn comes around.  Late in the season, small round fruits develop which are about the size of  a BB.  They have a tan or yellow tone.

Poison oak’s most notable attribute is that most people will get an itchy rash on their skin within two days of being in contact with the plant.  Most of the time, hikers get the rash when they unsuspectingly walk through a patch of poison oak, or brush up against it on the side of the trail.  But you can also get the rash in the winter when there are no leaves on the vines, and you get the rash when you pet your dog who has just run a hillside of poison oak.  In fact, highly sensitive people can actually get the rash on the very hottest days of summer when the oils are in the air around the plant. And firefighters are known to get serious infections from poison oak, whose oils are in the smoke of nearly all forest fires.

If you know you have been exposed to a poison oak plant, you can sprinkle a clay soil over the exposed area, and then wash with hot water and soap as soon as possible.  Though there are specialized soaps for poison oak, I have found that Ivory dishwashing liquid works fine to break down the oil in poison oak that’s gotten on your skin.

After the first time I received a serious poison oak rash, my mother took me to the doctor, who gave me cortisone spray and pills to heal the rash.  The rash went away, and I had some scars that lasted nearly two years.

As I researched poison oak, I learned that the Native Americans of Southern California actually used poison oak in many ways and were not known to get a rash from this plant.

It turned out that baskets were made from the long and even-thickness vines of the poison oak, and they also produced a black dye from the sap of the leaf.  Young poison oak leaves were also into their acorn meal and other foods.  Apparently, Native Americans were no more immune to the rash of poison oak than anyone else – approximately 20% of any population is naturally immune, and there are several factors that contribute to this. But it is believed that the ingestion of the poison oak on a regular basis rendered the Native American effectively immune.

I decided to try this nearly 40 years ago, and I no longer get a rash when I’ve been in contact with poison oak.  I just eat a few of the newly-emerging leaves every spring, perhaps every other week, and I no longer worry about getting a rash.  I quickly add that I DO NOT recommend this because individual body chemistry can be so different.  I merely pass it along as a personal testimony.

Definitely, if you know you get a rash from poison oak or poison ivy, learn to identify it and avoid it. 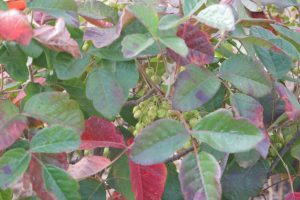 Besides going to a doctor, there are many backwoods medicine remedies for the rash of poison oak and poison ivy.  Here are some comments on each:

1. The fresh juice of the aloe vera plant is the best natural cure for poison oak rash. While any of the aloes can be used, aloe vera seems to be best. To use, cut open a section of the succulent leaf, and apply the inner, wet side directly to the rash, which will result in an immediate cooling sensation and a subsequent rapid healing. When I still got the rash, this was by far the best cure.  It would cause an immediate cooling sensation to the skin with a rapid healing.

2. Other succulents, such as Chinese jade and ice plant, have been used with some success.

3. Rub mugwort leaves (Artemisia spp.) over the exposed parts of your body before entering poison oak areas to prevent the rash.  The mushed-up fresh mugwort leaves can also be applied directly to the rash.

4. If you live in the eastern States, take the succulent stems and leaves of the jewelweed plant, crush it, and apply to the rash.

5. Wash the infection with an infusion of wild buckwheat leaves (Eriogonum spp.).

7. Drink a tea of the leaves of chickweed (Stellaria media) for stop ping the spread of the rash. Or you can apply the fresh leaves directly to the rash.

8. Drink an infusion from the leaves of manzanita leaves (Arctostaphylos spp.).

In the old days, mud or dirt would be spread on one’s skin to prevent a rash. Interestingly, a manufacturer has produced a clay-based product for firefighters. It is spread on the skin before fire fighting in poison oak-infected areas to prevent the rash.

Another method is to quickly wash the contacted skin with anhydrous alcohol, which breaks down the urushiol, the active oil in poison oak and poison ivy. Afterwards, wash well with soap and water. 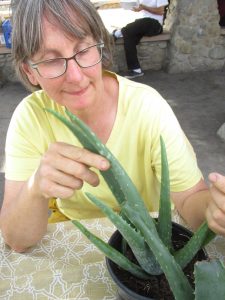