You are at Home Customization MAKING CLOTHES

Most people don’t make their own clothing anymore because clothing for the average person is cheaper today than it’s ever been in history.  But up to the WWII era, it was common for members of a family –usually the women –to make clothing for their own family.  Fabric shops used to be everywhere, and patterns for any garment could be purchased. 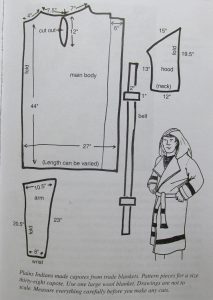 There are still those who take pride in making their own custom garments.  If you found yourself in a short-term survival situation, clothing is probably going to be one of your lowest priorities, unless perhaps you’re on a stranded ship, where your clothes decay rapidly from the salt and wind and sun.  But, you’d have no way to make clothes in that situation.

A long term survival situation – such as a prolonged war, or economic Depression –would likely see a revival in people making and even selling garments.  With the skill of cutting a pattern and knowing how to sew seams, you could make just about anything.  You could cannibalize zippers and buttons from old worn-out garments, and old fabrics from things like blankets, sheets, and even curtains could be used to make a variety of garments.

If you have an inkling of learning how to make your own clothes, whether for saving money, or for emergency planning, there are a vast variety of books, and countless classes you could take to learn the basics. 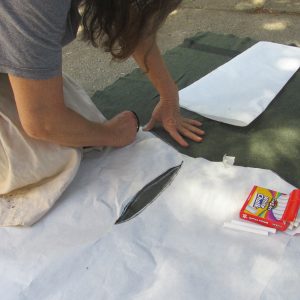 Students in Nyerges’ classes learn to make a pattern for garments.

I have long advocated the carrying of a sewing kit in every survival kit so you could make repairs when you’re on the trail.  A sewing kit needs thread of a few colors – I suggest at least white and black – and an assortment of needles. Safety pins help when you are sewing a garment together, and there are many other little things you could include, such as a small pair of scissors.

How to get started?  First, if you’ve never sewn anything, I suggest you beg someone who does know how to sew to show you a basic sewing stitch.  There are several ways to sew two pieces of fabric together, depending on what you are making.  I usually make my stitches, or repairs, on the inside of the garment so they are more or less invisible when finished. 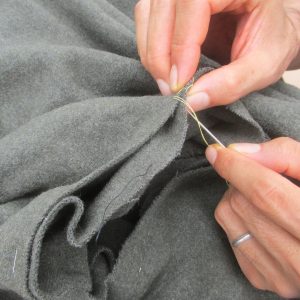 Learning how to sew two pieces of fabric together is a very basic skill!

I would suggest that you begin with a simple project, using old fabric so you’re not worried about making mistakes.  I think a vest is a great beginning project, since a simple vest requires one back piece, and two identical side pieces.   You can add pockets or buttons if you wish.  I made my first vests with blanket material and they were actually very good winter gear. 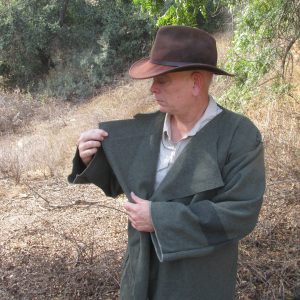 Bushcrafter James Ruther tries on a new-made capote, made from a wool blanket.

If you don’t have a pattern to work from, you can take apart an old vest so that you can plainly see the parts you need to make.  Remember, where the pieces come together, you need to have a bit of overlap where you connect the pieces.  I generally make a paper pattern of any garment I am making. I then tape the pattern together and carefully put it on to determine if I need to make any adjustments before I cut and sew the final fabric.

In my book, “How to Survive Anywhere,” I have a discussion of different fabrics, and simple clothing projects you can try such as footwear, a vest, and the Plains Indian capote (French for “cape”). 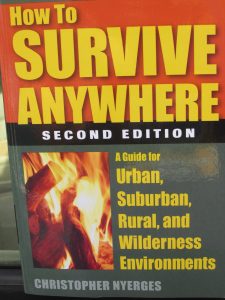 I always found the capote far better than a standard winter coat sold at outdoor stores.  The capote hangs down to your knees, and provides much better warmth.  It is also very simple to make.  It consists of one large back piece that includes the sides, two identical pieces for the arms, a hood, and a belt.  I give a pattern for it in my “How to Survival Anywhere” book, and again, before making one, I suggest you make a paper pattern and try it one to make sure it fits your body size. 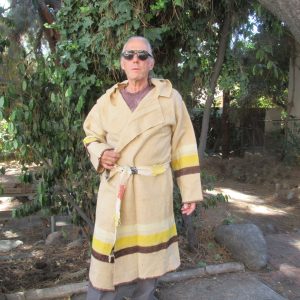 Nyerges with one of his lightweight capotes

I remember reading about capotes in the book “Mystic Warriors of the Plains,” describing how the Plains people got trade blankets from the U.S. Government. Using just a knife and thread from sinew or plant fibres, they made the beautiful and distinctive long coats from those striped blankets.  I figured if they could do so much with so little, a guy like me could make one and wear one.  I’ve probably made less than 20 over the years – some as gifts – and I have made children’s capotes, as well as ones from cotton, thin wool, and thick wool for the coldest days. 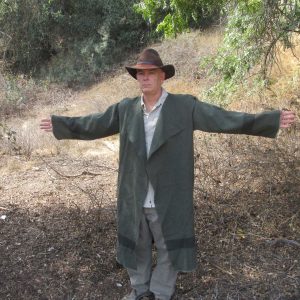 Making your own clothing is a great project and might even lead to a business or a way to have articles to trade in hard times. And it just might help you survive some difficult situation. 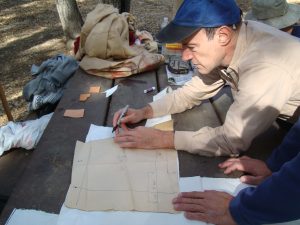 Tracing a pattern onto fabric before cutting the fabric.

In 1972 and 1974, the last two Japanese soldier holdouts from WWII came out of their jungles, and a new chapter in survival was told. Their stories have been widely published in books and on-line – please read them!  Try this link:  https://www.primitiveways.com/jungle_30_years.html

HIROO ONODA
Hiroo Onoda was on one of the Phillippine islands he finally came out in 1974.  He would not surrender until his old commander ordered him to do so.  Among the many stories that his near-30 years in the jungle told is the story of his clothing.

CLOTHING
Onoda noted that his clothes were always rotting. He made a needle from some wire netting that he found, which he straightened and managed to put an eye on one end. He made thread from the fibres of a hemp-like plant that grew wild in the forest. Fishing line was also used for thread. He would patch and patch, and then even take pieces of canvas from the edges of his tents. After his clothes could no longer be patched, he would steal fabric or clothing from the village whenever he could. Much of the fabric that he would steal he’d use to add linings to his existing clothes, or to double the knees or seats, any places where there were weaknesses. He would take old shoes and make sandals. He had a jacket which he could turn inside-out and attach branches to little loops he’d sewn. This made the jacket into a camouflage coat. He also wove straw sandals.

By the way, after all this time of eating no processed food, he came out with perfect teeth!

SHOICHI YOKOI
Yokoi was resisting the surrender on Guam, and was found and “captured” in  January of 1972.  He too had many stories to tell, including having perfect teeth!

CLOTHING
Reporters who saw Yokoi’s clothing were amazed. They were unable to determine from what sort of materials they had been made. He even had home-made buttons! His clothes were made by beating the bark of the pago tree into flat pieces of fabric. The pago tree is very common in the mountains of Guam. He then beat pieces of brass in order to create a needle shape, and gradually drilled holes in his sewing needle using an awl. His thread also came from the beaten bark of the island’s pago trees. He wove cloth from the beaten fibre, and sewed the pieces together to make a total of three “suits” during his 28 years on the island. By the way, Yokoi had been a tailor before the war, a craft that served him well. His 3 sets of pants and shirts were hand-made and then he would constantly repair them to keep them serviceable. He took plastic from a flashlight and fashioned buttons, button-holes and all. He manufactured one belt by weaving the pago fibres, and onto the belt he had a hand-made buckle that he’d fashioned from wire. It turned out that in the past, the people of Guam used to manufacture a rough cloth from the pago fibre, and they turned these into something like burlap bags. It is said that this is no longer done today, so Yokoi ­ out of necessity — rediscovered one of nature’s secrets.