With a lot of people wanting something small to carry in their pocket, it makes sense why North American Arms micro-revolvers have been in business for as long as they have. With carrying something small like a .22LR or even a .22 Mag, it makes for a great “get off me” round. So why isn’t a lot of other companies trying to get in on this growing pistol frame.

Well, Inter-Ordnance, Inc has now entered that realm of micro-revolver style pistols. Introducing in February 2017, the Valkyrie Revolver chambered in .22LR will be available for sale. This little 4” overall length micro-pistol is a 5-shot single-action revolver with a swing out cylinder that features a shell extractor, polymer grips, and an optional laser sight. Talking with the IO Representatives here at SHOT, they also told us that they will also be producing a 22 Mag in a few more months as well.

Something this small is great for an EDC Pistol and can be carried discreetly. Offering a front blade style sight and small rear sight, and over exaggerated hammer for easier pull, this revolver is actually quite nice comparing it to an NAA. Even NAA is thanking IO for coming out with this pistol due to NAA not being able to keep up with the high demand of their pistols.

MSRP is coming in at $259.95, which is actually not too bad considering. We look forward to seeing this hit the market to see how they do and maybe try one out to review! 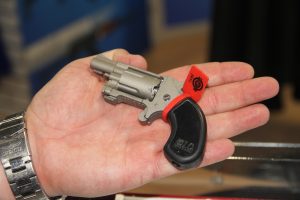