You are at Home Featured NATURAL NAVIGATION

[Nyerges is the director of the School of Self-Reliance, and the author of many books. See more at www.SchoolofSelf-Reliance.com]

Navigation generally refers to all the method and devices that have been developed over the centuries for finding our way from place to place, and not getting lost.  Originally, all our navigation methods were observations of the natural world, such as the way plants grow, where moss grows, how snow melts, the position of the sun and moon, the position of the stars, as well as the use of the full spectrum of devices for making these observations.

Modern people rarely think about north vs. south, the divisions of time, or how these things are figured, adjusted, or corrected.  Why? We’ve let our technological tools do this work for us, and as an unintended consequence, we’ve grown increasingly unaware and ignorant of our surroundings.

A lot can be learned by simply observing the path of the sun throughout the year.

The Sun is a major indicator of direction. The sun rises in the east, slowly moves across the sky, and sets into the west.  That’s the general idea, though it’s a bit more complex than that. 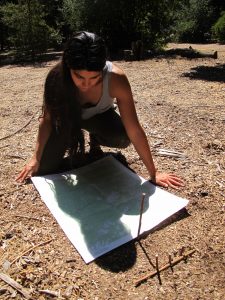 In general, when you are in the northern hemisphere, your shadow will be pointing generally northward if the  stick is stuck vertically into the ground.

The shadow’s movement, marked by the pebbles, will be eastward, because the sun moves west-ward.  The shadow should be the shortest around  noon, when the sun is directly overhead  (directly overhead at 1 p.m. if there is Daylight Savings Time).

If you now draw a straight line from the stick to the stone marking the shortest shadow, you should have a north-south line, more or less.  A perpendicular line gives you an east-west line, and your crude compass.

“It is important to hold on to the idea that there is nothing about the movement of the sun that cannot be understood by putting a stick in the ground and watching its shadow.”  –Tristan Gooley.

THE NIGHT SKY: THE STARS AND THE MOON 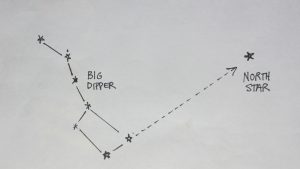 Locate the outer two stars that comprise the “dipper.”  We call that distance x.  Those two stars are in a more or less direct line to the north star.  If you continue a line with a distance of 5x, in the direction that the dipper would be pouring, you find the north star!  Wow, people who are seeing it for the first time often say. That’s the North Star? Not all that bright.

If you know north, you obviously know south, and perpendicular to your imaginary north-south line is east and west.  If you can find the north star in the Northern Hemisphere, you now know all your cardinal points!

You should take the time to also get to know Orion, which is another good constellation for telling directions.  (Check out my book, “Guide to Getting Around Without a Compass”).

When you take more time to observe your environment, you’ll get better and better at telling direction, even without a compass or map.  Nevertheless, I’m a big fan of carrying a map and compass, and knowing how to use them properly. We’ll talk about that more in the future. 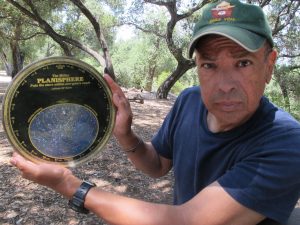 AS-02: (Featyred Angelo places a stick horizontally on the ground, defining the tip of the shadows in the past hour or so. The stick defines an east-west line.

AS-03: The shadow method for determining east-west is accurate enough for adjusting your map to the terrain.

AS-04:  A view of the big dipper, and how to find the North Star from the two back stars of the Dipper.  Don’t forget: In the northern hemisphere, all stars will appear to rotate counter-clockwise around the north star, in a cycle that takes 23 hours and 56 minutes, so the Big Dipper will always be in a different position in the sky, depending on when in the year, and when in the night, you attempt to observe it.

AS-05:  Enrique Villasenor shows the Miller Planisphere, a popular device for assisting in the finding and identifying stars and constellations.