You are at Home Politics NY Shooting: What to ban next? 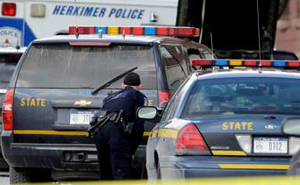 NY Shooting: What to ban next?

Another firearm tragedy strikes and in one of the most anti 2A states, New York. Our thoughts go out to the family and friends of the ones lost but I think it’s important for New York, like the rest of the country, to not let emotion cloud their judgment.

That being said New York will probably be pushing to ban all guns shortly. It’s only a matter of time before they make an argument that shotguns are “assault shotguns” and need to be banned as well. The fact is this tragedy was committed by someone unstable and I think Donald Borsch Jr said it best “Until you can legislate against crazy, my advice would be to carry a firearm.”

Here is a quick synopsis of the tragic events that occurred:

Myers’ death ended a nearly 24-hour ordeal that engulfed the Mohawk Valley villages, where police say Myers killed four men and two wounded two others at a barbershop in Mohawk and a car care business in Herkimer.

D’Amico said police still don’t know why Myers went to the two small businesses and opened fire with a shotgun. He called the attacks “unprovoked and random.”

Here’s how it ended:

HERKIMER, N.Y. (AP) — Police SWAT teams navigated through a cluttered, abandoned bar to find the suspect in four fatal shootings holed up in a small room, and the man was killed a shootout with officers after a nearly 19-hour standoff that paralyzed an upstate New York village, authorities said Thursday.

Why Kurt Myers went on the shooting rampage Wednesday remained a mystery.

State police Superintendent Joseph D’Amico said state police and FBI tactical teams entered the first-floor of a building in Herkimer around 8 a.m. to end the standoff with Myers, 64, of neighboring Mohawk. Myers opened fire through a door at officers, killing an FBI dog, D’Amico said.