You are at Home Military PACK YOUR S***, YOU’RE GOING TO SERE SCHOOL:” PART 3

By Sean Spoons via SOFREP.com

Approaching Brunswick NAS we passed numerous small islands and slim peninsulas that extended like the fingers of a hand into Casco Bay. From the air, all airports look similar but as you get close to a Naval Air Station its unique features begin to stand out. Neatly laid out rows of uniform buildings, a web of ring-like cul-de-sacs that lead to underground munitions bunkers and large hangers. Brunswick had been an important patrol base for Navy bombers during WWII covering convoys and hunting German U-boats off the coast. It had been deactivated for about a decade after the war until the emerging threat of Soviet submarines off the U.S. coast became apparent and the base had been reopened and expanded. The base had two parallel, 8,000 ft runways and a couple of P-3 Squadrons based there. When combined with the P-3s deployed overseas to Iceland and the U.K., the P-3 Orion could cover the whole North Atlantic Ocean.

Coming in low I realized how much snow was on the ground and my heart sank. There was snow everywhere and I suddenly remembered that I was nearly 700 miles north of Norfolk where it was already pretty damned cold. The Orion touched down easily on the runway which was clear of snow and ice. We taxied over to a spot near the tower where another small group of uniformed passengers was waiting to board near a couple of carts full of canvas bags. A large fuel truck arrived to top off the plane’s tanks. Grabbing my bag I made a point of thanking the petty officer who had hooked me up with a crew seat on the plane and asked if they were staying in Brunswick. “Nope,” he replied.

“We’re going to Kay-Vic.” “Kay-Vic” was slang for Kevflavik, Iceland. These guys were going to spend another seven-eight hours in the air covering more than 2,000 miles. The waiting passengers were going there too on travel orders and those canvas bags were mail for the base. When they opened the door there was a blast of freezing cold air that instantly took over the warmth of the cabin. We climbed down the extended ladder onto the ramp and entered the Flight Operations center and got a map of the base with circles indicating where the SERE School Administrative office was located. We humped our gear on foot over to the SERE School Admin building.

It was a small house-sized building with wood siding and a front porch. A Second Class Petty Officer was seated at a desk as we came in. He appeared to have no interest in us at all for several moments. He then took our orders, tore off copies, and logged them. Then, one of those acronym-laden conversations unique to the military took place. “Okay,” he said taking one of our base maps and getting out a pen. “This is the Enlisted Mess, you guys aren’t entitled to BAS so I’ll give you Chow Cards, the Exchange is here, the TAD/TDY quarters are here, give them one of the copies of your orders which I’m stamping right now. The E-Club is off-limits and you may not step foot off the base without our permission, clear?” What he just told us is where to eat, how it would be paid for (not by us), where the department store was and where we would sleep. That was all we needed to know. We were also told to be dressed out in our Cracker Jacks for orientation the next day at 0730hrs.

Walking over to the barracks on foot seemed a long walk in the cold. I thought about breaking out my Peacoat and putting it on, but it wasn’t authorized for wear with flight gear so I didn’t dare, but I did put on my wool watch cap which helped some. The TAD/TDY quarters consisted of a long, two-story wooden barracks building about two feet above the ground on concrete caissons and probably dated back to WWII. We each cursed a little under our breath at the sight of it. We had imagined that our quarters would consist of 20-30 sets of bunk beds running the length of the squad bay. It would have a linoleum deck in green or gray and it would probably be cold and drafty with communal showers and shitters.

Instead, to our great surprise, we found the two floors had been partitioned into private rooms, each with a tall locker with drawers, a clock radio, a desk and chair, and a rack with a pretty thick mattress. There were even fresh towels and maid service switched out the linens each day and made the racks for us. We also found there was a comfortable lounge at one end with a 25″ color TV (considered large at the time) with shelves of books and magazines, and even reclining chairs! On the other end of the floor was a small arcade with a couple of pinball machines and some video games. There was also a beer machine that dispensed four different kinds of beer for 25 cents a can. Compared to the four-man room I was living in back in Norfolk, this was the Ritz Carleton. As it would turn out, I would spend exactly three nights out of the next 10 in this lap of luxury.

I changed into my “blues” (which are actually black) and we puttered around until the chow hall opened. If you’ve ever wondered why we call it a “Chow Hall” in the Navy and Marine Corps, here is the “skinny” on it. The Navy has a language all its own dating back a couple of hundred years with all kinds of subtle rules about when terms can be used aboard ship or ashore. It’s is said that a sailor on a frigate in 1812 could be teleported to a modern Navy Frigate and find that modern sailors still use the same words he and his shipmates would have used more than 200 years earlier. But just about every word the navy employs also has some slang term that goes with it.

Aboard ship, the dining area for enlisted men is called the “galley” or by its more formal name the “Enlisted Mess.” When ashore “Enlisted Mess” would still apply and you would drop the use of “galley” unless you wanted your friends to bust your chops for trying to be too “salty.” while ashore. But the word “chow” as a slang term for food was said to come from China over to California in the 1850s. The U.S. Navy, and by extension the Marines, had a significant presence in East Asia on what was called the “China Station.” We had a whole Asiatic Fleet that made port calls for coal and food all up and down the China Coast. It is said that the word “chow-chow” was a pidgin English translation of the Chinese word for food. Sailors and Marines who had spent years on the China Station brought that term back with them and it stuck. Marines and sailors still call their enlisted mess ashore the “Chow Hall.” In American English, the word “chow” means food because retired sailors and marines still used the term in civilian life. So when you hear somebody use the word “chow” to describe food you can almost be certain they have some connection to the Navy or Marines because that word was really never used by the Army or Air Force.

Anyway, “Food is Morale” in the Navy. We tend to eat pretty well in the fleet and within the fleet, it was known that submarine bases and naval air stations tended to have the best chow since they had more money to spend on it. Brunswick was no exception. We presented our Chow-cards to a Mess Specialist when we entered (so we didn’t have to pay an extortionate sum of about $2.35 to eat) and we each slammed away a couple of plates of food. We didn’t know when we might eat again and we were trying to pack as many calories away as we could. We waddled back to the barracks pretty stuffed. Rather than grab some beers and watch TV in the lounge we all hit the rack early. I took out my POW book and tried to read myself to sleep, but when you were beginning SERE School the next morning harrowing tales of torturous confinement at the Hanoi Hilton really doesn’t work. 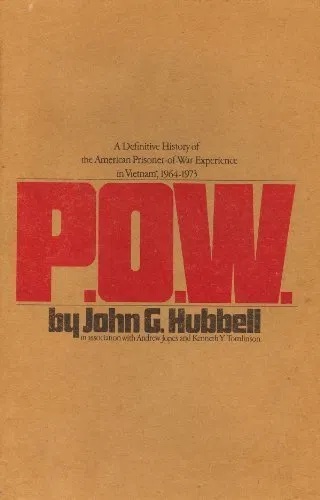 What I found in Hubbell’s book were some ideas about what it would be like to be a POW and how to not just survive, but to do so with some sense of your honor and integrity still intact. By the time I finally fell asleep, I was resigned to just getting on with it. I’d had enough fearful anticipation of SERE School’s unknown terrors and just wanted it to start because that was the path to being done with it. Little did I know that reading that book in preparation would end up causing me quite a bit of trouble after I got back to Norfolk.

The kind of trouble that gets you kicked out of the Navy.

This is Part III of a multi-part series on Navy’s SERE School.