You are at Home Military “PACK YOUR S***, YOU’RE GOING TO SERE SCHOOL!” PART 4

By Sean Spoons via SOFREP

I began the morning at o500hrs with about 20 “wind sprints” up and down the long hallway of the TDY barracks, banging on the doors of my two other squadron mates each time as I ran past their rooms. I had brought some PT gear, but it was just my UDT shorts, the converse Chucks I had been issued in boot camp, and a T-shirt. I thought of myself as pretty tough, but no way was I going to run in what amounted to my underwear in single-digit temperatures.

By 0600 hrs, we were at the chow hall wolfing down as much grub as we could stuff ourselves with, trying to store away calories we knew we would need. We learned to do this in SAR School at NAS Jacksonville, which had four-six hours of PT and swimming a day. Stuff yourself with carbs for energy stores, don’t worry about gaining any weight, worry about losing it as your body breaks down your own muscles and eats them for fuel.

In those days, the physical activity of being a SAR swimmer (two hours of hard PT every day) had given me a metabolism like a reactor on a nuclear submarine: A four egg omelet with “everything,” four strips of bacon, four Navy sausage links, hashbrowns, and two big glasses of milk was a fairly standard breakfast. Those 3,000 or so calories would see me through till lunch, but my stomach would grumble still. My caloric intake may not seem like a detail of much importance to a story about SERE School, but believe me when I tell you, it ended up meaning quite a lot.

SERE School itself was a nondescript building with wood siding and a shingle roof. No big signs on it proclaiming its importance, just a small blue painted plaque by the front door with a building number and the acronym “FASOTRAGRUDET” in gold letters. Underneath it hung a smaller plaque with the name “CDR Timothy B. Sullivan, OIC” written on it. I should have recalled that name but since I was distracted and rushed I didn’t make the connection I should have made.

We checked in and were ushered into a large conference room that obviously wasn’t built to impress anyone. It held about 60 desks with built-in chairs, like a college’s, a large dry erase board, and a podium at the front. Hanging on the wall was a large poster displaying the Code of Conduct. I later came to realize that the entirety of SERE School was built around the principles embodied in this code. 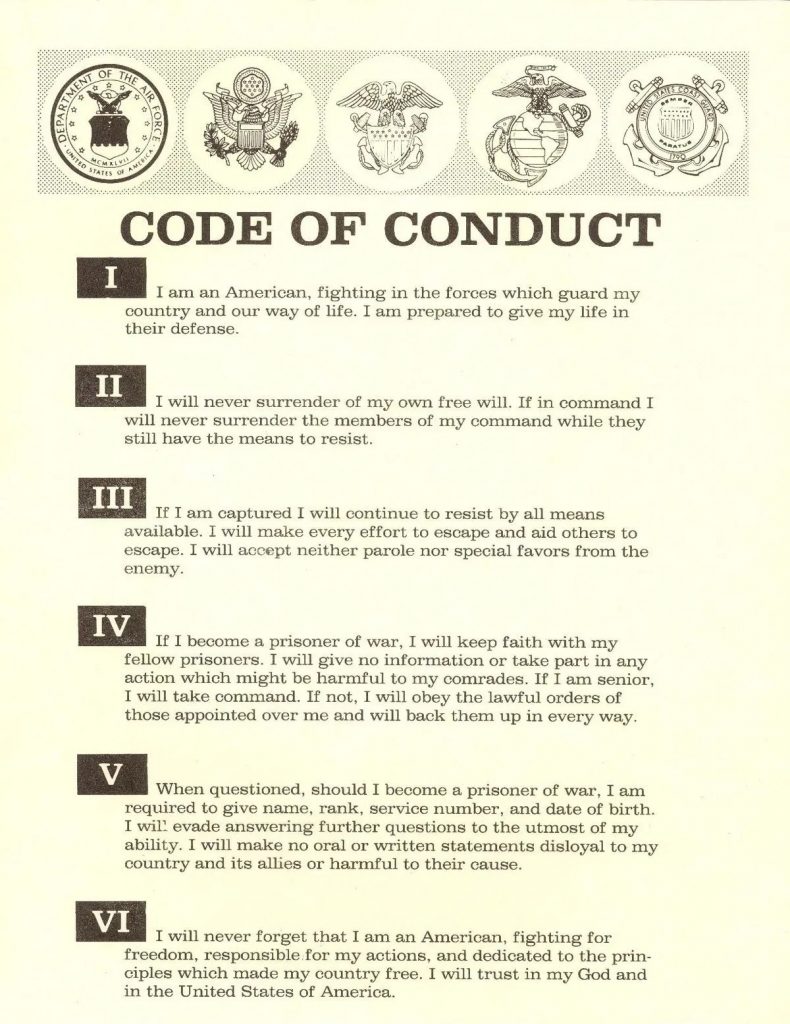 There were over 50 other students in the room, a mix of young officers and enlisted men. None of the officers appeared to be more than an 0-2 or Lieutenant Junior Grade. The enlisted guys weren’t more than an E-4 or PO3. All of us were aircrew, pilots, or naval flight officers, SAR-AWs, and other rates that flew in P-3s, S3A Vikings, SH-3, Sea King helicopters. You could tell the SARs guys though, we were all pretty fit and carried ourselves just a little differently. A civilian instructor called us to our seats and gave us a brief introduction to the school as other instructors filtered in. He then introduced the Officer In Charge (OIC), Commander Timothy Sullivan.

A booming voice from the front of the room said “ATTENTION ON DECK!” and there was the sound of 50 some odd desks legs all scrapping the linoleum floor as CDR Sullivan entered the room in his Service Dress Blues (the Navy officer uniform). White shirt, black tie, black double-breasted coat with two rows of brass buttons, and gold braid cuffs. No hat though — in the Navy you only wear a cover indoors if you are in an official duty status of some kind. He was in his early 40s, not tall but not short either, of medium build, and had very thick black eyebrows above dark eyes that were gravely serious. This was not a smiling officer, at least not here. He welcomed us with a few words and then went on to describe the course and schedule in a very matter-of-fact, no-nonsense brief. We would be in the classroom for less than two days and then up in the mountains for a day of practical experience in the survival techniques we would learn in the classroom and then the actual SERE exercise would begin.

The scenario was quite simple and elegant: We were shot down behind enemy lines and would be aided by partisans who would give us directions to the border of a neutral country. We would do this while enemy forces actively searched for us. If we could make it to the border within the time limit we would receive a hot meal and a few hours of sleep before we entered the POW phase of the exercise. We were not told at that time for how long the exercise would go on. You could have heard a pin drop in the room — it was absolute silence. I recall glancing around a bit at the other instructors. If you wanted to get a good idea of how an officer was regarded by his people, you watched how his subordinates behaved while he’s talking. Are they looking at him and paying attention? Or are they fidgeting with their papers or looking at their own bellybuttons in boredom? Every instructor in that room was “eyes on” with CDR Sullivan while he spoke, some even had a slight smile on their faces. You could tell they were in complete awe of this rather soft-spoken and unassuming officer.

In November 1967, young LT Sullivan took off from the carrier USS Coral Sea as the backseater in an F-4 Phantom hitting targets in North Vietnam. About 15 minutes away from Haiphong Harbor his plane was destroyed by a surface-to-air missile. He and the pilot, Paul Schulz, both ejected safely but were captured.

They spent over five years as POWs. A very difficult five years. 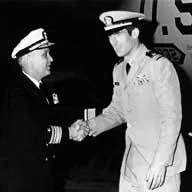 LCDR Sullivan returns to the U.S. after his release as a POW in North Vietnam

CDC Sullivan’s conduct was of such an exemplary nature that he was awarded the Silver Star in 1972 for actions he undertook while a POW. His award certificate read in part,

“[…] For conspicuous gallantry and intrepidity while interned as a Prisoner of War in North Vietnam[…] Lieutenant Commander Sullivan’s captors, completely ignoring international agreements, subjected him to extreme mental and physical cruelties in an attempt to obtain military information and false confessions for propaganda purposes. Through his resistance to those brutalities, he contributed significantly toward the eventual abandonment of harsh treatment by the North Vietnamese, which was attracting international attention.

By his determination, courage, resourcefulness, and devotion, Lieutenant Commander Sullivan reflected great credit upon himself and upheld the highest traditions of the Naval Service and the United States Armed Forces.”

Most of the POWs held by the communists in Vietnam were airmen. And most were subject to such gross abuse and mistreatment that many could not return to flight status after they were repatriated. They had unhealed broken bones, problems with balance and eyesight, and a whole raft of issues that meant their flying careers in the services was over. Most were entitled to retire at 100 percent disability. The Navy doesn’t have much use for a Naval Flight Officer who can’t pass a flight physical so an early and entirely honorable retirement was certainly available to Sullivan had he elected to take it.

But instead, the Navy not only retained him but promoted and made him the OIC at SERE School, a post he held for an extraordinary 10 years when such postings generally only last two-three years. Some 24,000 Navy and Marine aircrews would pass through SERE School while CDR Sullivan was running it. The Navy would later award him the Legion of Merit for his contributions to this training.

CRD Sullivan concluded his lecture with a talk about the Code of Conduct and how it came into being, its plain text, and what was expected of us as servicemembers. This was, for all if not most of us, our first exposure to the Code. We all repeated its words in unison as he covered each part. He concluded by informing us that now that we had been given the code (in a booklet form) and were informed as to its contents, we were bound to it while we wore the uniform. We were required to memorize it and keep it memorized in case we ever found ourselves in enemy hands.

And we were accountable to the Navy and the country for maintaining that Code of Conduct if captured. Because SERE training wasn’t just about surviving as a POW and returning home someday.

It was about surviving and returning… with Honor.

This is Part IV of a multi-part series on Navy’s SERE school.