You are at Home Featured PRIMITIVE FIRE-MAKING

[Nyerges has been teaching survival skills since 1974, and is the author of 22 books, including the recent “Guide to Making Fire without Matches.”  For more information, go to www.SchoolofSelf-Reliance.com].

Today, when we think about what we shouldn’t leave home without, commercial TV has trained us to believe that the travelers checks must not be left behind.  Of course, there are also keys, credit cards, cell phone.

But if you were born 500+ years ago in North America, you’d never leave home without some sort of knife and firestarter. 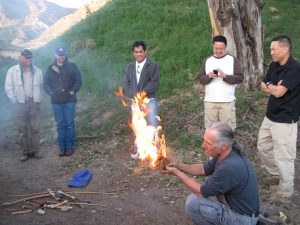 When I began my study of self-reliance and bushcraft over 50 years ago, I knew that I had to study the uses of plants for food and medicine.  I quickly realized that my study had to include the primitive methods of creating fire. 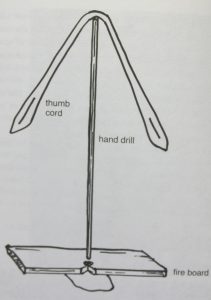 In most of North America, the fire starter was the hand drill.  The hand drill consists of two pieces of wood:  an approximately 18 inch, pencil-thick drill, which is spun onto a flat piece of wood, like a fence slat.  A triangular notch is carved onto one edge of the flat piece (the hearth), and the drill is spun onto the hearth at the tip of that notch. As you spin, wood dust flows into the notch and heat develops, and if you don’t faint first, an ember develops which you then place into some ideal tinder, and gently blow on it until you get a flame. 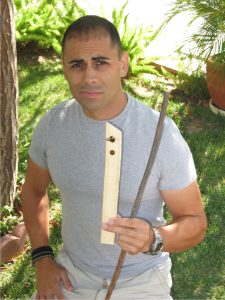 The fine details of this are covered in my 2020 book, “Guide to Making Fire without Matches,” and other books. 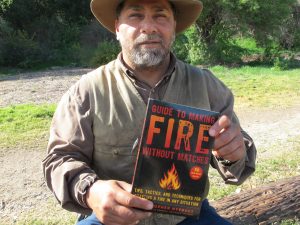 If you have never done this before, outdoor survival teacher Larry Dean Olsen suggests you start about noon if you want a fire by midnight. He is being optimistic.

My first attempts to do this were humbling failures, as I lay on my patio with blistered palms and no more energy.  But in time, with practice, I could do it in under 30 minutes, and today can fairly reliably produce a coal in under 10 minutes. No surprise that only a few hundred people world-wide are believed to be proficient at this method of fire-starting.

But some folks are not content at taking 10 minutes to get a fire by this most primitive of methods.  Alan Halcon of Southern California has done it in TWO SECONDS!  How did he achieve such a feat?

Halcon says, “I think there has always been this mystique surrounding fire, not just for me, but for everyone.  You almost enter into this mystical realm when you are doing this.  And this ability to make fire with two pieces of wood and  your hands is not only exhilarating, but that fire then can provide you with so many things,” such as warmth, purifying water, signaling ability, etc. 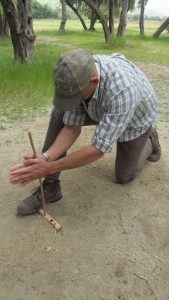 Halcon had read about primitive fire-making for years, but finally took a class and learned first hand. He said that it really paid off having someone show him what to do, and not do, the nuances that were not available in books.

“The first time I tried this,” says Halcon, “I felt that there was this innate connection between me and the wood, like a symbiotic relationship.  That was about 10 years ago. In the beginning, I was completely obsessed with making fire with the hand drill, and for the first few months, I practiced this about two to three hours a day. I was fascinated with it.”

Halcon points out that this was far more practice than someone would need in order to simply learn how to make fire.  But he was focussed on mastering this skill, not simply proficiency.

THE RACE IS ON 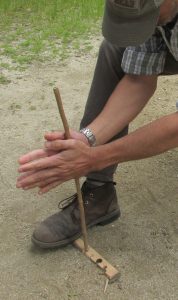 The race was on.  For Halcon, it has always been a personal challenge to do this, and to learn which woods work best, and under what conditions. He used to use a mulefat drill with a willow hearth, but has since changed to an ash hearth, which he finds to work quicker.

Is speed really all that important?  After all, I am happy to just to be able to do it, and if I can do it under 10 minutes, I am happy indeed.

“I feel that getting a coal as quickly as possible is important for at least two reasons,” explains Halcon.  “First, you are losing less energy if you can get it right away.  And second, the quicker you get that coal, the less likely you will get blisters on the palms of your hands, which can lead to infection in a wilderness situation.”

So, in July of 2008 at Pasadena’s Hahamongna Watershed Park, Halcon challenged himself again and, with seven expectant witnesses (one with a stop watch), Halcon managed to get that coal in two seconds.  (OK, so there was one witness who thinks it was 2.4 seconds, but he was probably just a naysayer.)  And then he repeats the feat a second time, and Halcon exploded into the same ritualistic, screaming wild dance that we saw Tom Hanks perform after he created his fire in “Castaway.” 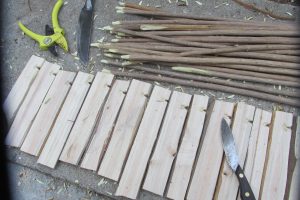 Anyone who practices with the hand-drill will realize that though this not easy, it can be done with the right woods and with persistence.  Also, once you succeed at this method, you will like regard every other friction method as much easier. 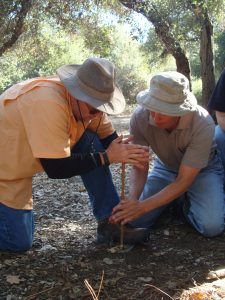 ALL PHOTOS BY CHRISTOPHER NYERGES UNLESS OTHERWISE INDICATED

Fire-01: Christopher Nyerges (with fire) shows how a fire is made by friction, to the students of Stanton Lee (right). PHOTO BY HELEN NYERGES.

Fire-02: A view of a typical hand drill, with the thumb cord which increases the efficiency.

Fire-05: Halcon demonstrates the use of the hand-drill.

Fire-06:Alan Halcon demonstrates one of the methods for using the hand drill.

Fire-07: Willow hearths and mulefat drills being prepared for a class in fire-making.

Fire-08: Teacher Gary Gonzales, right, shows the fine points of getting an ember with the hand drill.