You are at Home Featured Primitive Survival in the Urban Jungle

Primitive Survival in the Urban Jungle

Life Saving Lessons from the School of Self Reliance, one of the oldest survival school in the US.

To see him you would think you’re looking at Billy Jack, the iconic martial arts character that graced our television sets in the 1970’s. But Christopher Nyerges is just the opposite.  A soft-spoken Los Angeles native that first had an interest in botany and wild foods at the age of 10 while visiting his father’s farm in Ohio. Eventually leading to him create what is now one of the oldest survival schools in the US. 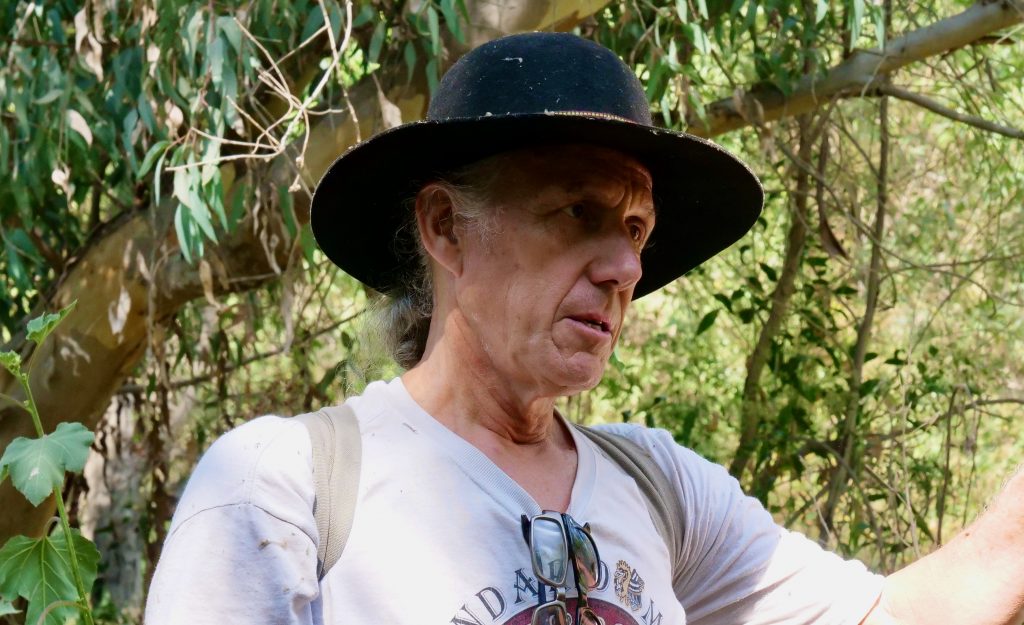 Officially started in 1974, the School of Self Reliance teaches skills ranging from wild food identification and cooking, to primitive weaponry, orienteering, shelter construction and much more. And of all places, right in the heart of Los Angeles, California. But Christopher is not just another survival instructor, he has written over 10 books, been on several survival related television shows including Doomsday Preppers, he wrote a best seller “How to Survive Anywhere: A Guide to Urban, Suburban, Rural and Wilderness Environments”, which is now on its second edition.  Additionally, he has been a consultant for the Discovery Channel hit show “Naked and Afraid”. 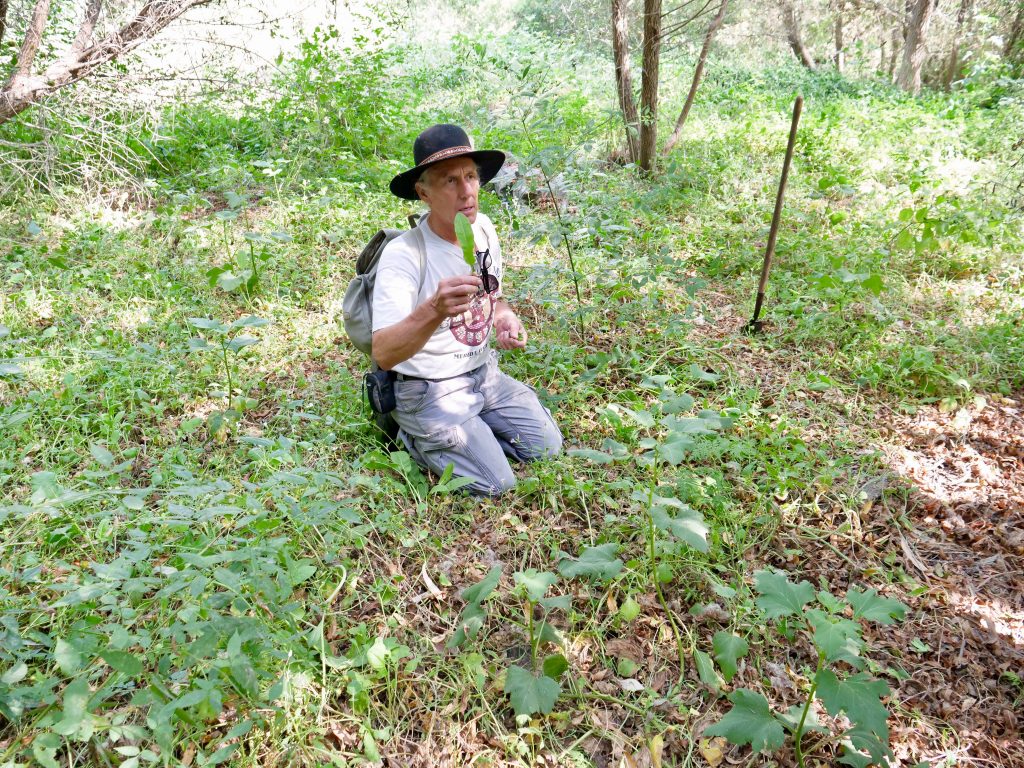 I had the opportunity to attend one of Christopher’s courses on securing water in an urban environment, which included plant identification.  One thing most people are not aware of is that Los Angeles is an extension of the Mojave Desert and within the Southern California eco system there are pockets of the raw rugged desert it once was before the cement city invasion.

A prime example of this is the Arroyo Seco area of LA bordering Pasadena.  A wash basin that has yet to be developed which runs 25 miles out of the Angeles National Forest just below the famed Rose Bowl.

This biodiverse region is a fantastic location for such a class like this.  Christopher starts off the morning session questioning students about water sources in Los Angeles and if the grid was to go down, what are your options? A discussion that was relevant to anywhere you might live, but with the population of Los Angeles County especially important.  Some of those in attendance were part of the Certification Program offered by the School of Self Reliance, where after completing the series of courses you received a Self-Reliance Skills Specialist Certification.

The morning session moved briskly with table top discussions and drawings about different ways to secure water in the urban jungle. Walking through the Arroyo Seco it was stressed to keep alert in your environment.  There is food everywhere, get to know your community and what edibles are lying in plain sight.  While others may be freaking out, you will be able to stroll down to your nature supermarket, quietly grab some grub and get home. During our walk through the thick vegetation it was amazing to see how many edible plants or vegetation are in the arid landscape.  Throughout the day we picked nettles, lambs quarter and mustard. Granted this is no Gordon Ramsey spread, but a meal for sure. 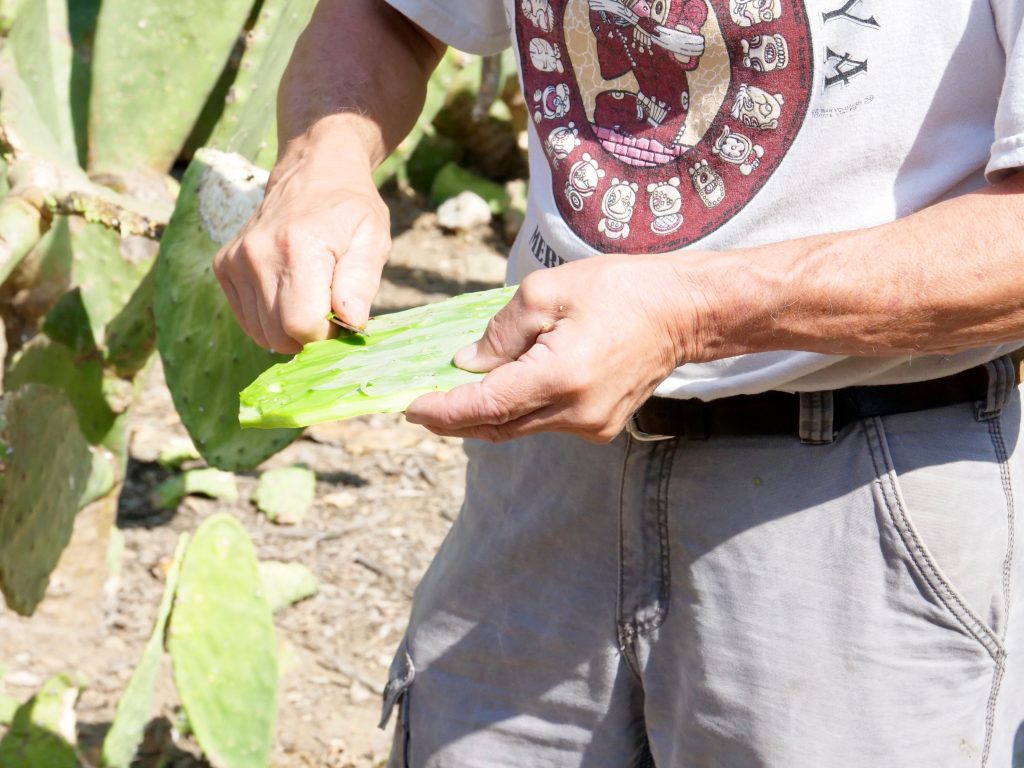 A phrase used was “when in doubt, do without”, know what you are eating!  At the end of the day the edibles we collected would be used for a soup we’d be preparing.  One thing he would hit home with, is that the skills needed for Wilderness survival have practical applications in the Urban environment.

Walking along the trail we came upon some desert cactus. It has been awhile since I had eaten this and as you peel the skin and eat it, it’s edible but not my first choice.  But again in a survival Off-Grid situation, a little salt and pepper and your good to go.  In my book, salt and pepper make all the difference in the world.

Finding a suitable tree, we set up the first of our water catchment devices.  A “transpiration bag”, a clear plastic bag used to collect transpiring water which is moisture collected in the bag from the leaves of the tree.  This complex work of the leaves converts sunlight to food for the trees and oxygen for us and as the leaves sweat, the moisture is caught in the bag.

The first step is  placing a bag around the tree.  After finding a suitable leafy branch, you wrap a clear plastic bag around the branch, preferably in the sun, then tie it off at the base and wait. The pint or so of water recovered over the course of several hours was not much in the large scheme of things, but left for 24 hours and placed over several trees, you’ll have life sustaining water. The one drawback is that a “Transpiration Bag” needs to be moved every 24 hours. Ideally this system works best with a Willow tree, however Oak and eucalyptus also work with a high rate of transpiration. 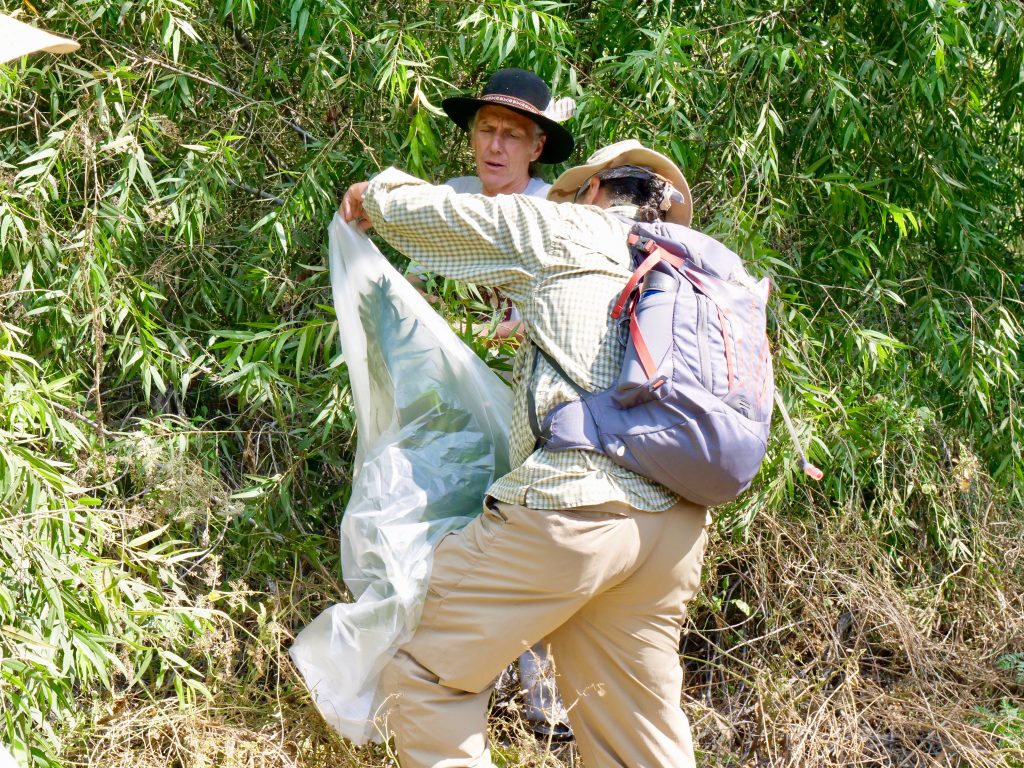 Walking through the arid wash basin of the Arroyo Seco, Christopher pulled out another tool in his tool box of tricks and described the famous “Desert Solar Still”.  A process whereby you construct an approximate 3-foot-deep by 3-foot-wide hole in the ground, covered with a large piece of plastic.  A cup or container is put in the middle of the still to catch the water.  When constructing a “Desert Solar Still” he says the focus should be at the bend or curve in a dry river bed.  Why? Because this is where water tends to back up and pool, thus offering an easier time to dig in potentially damp soil. 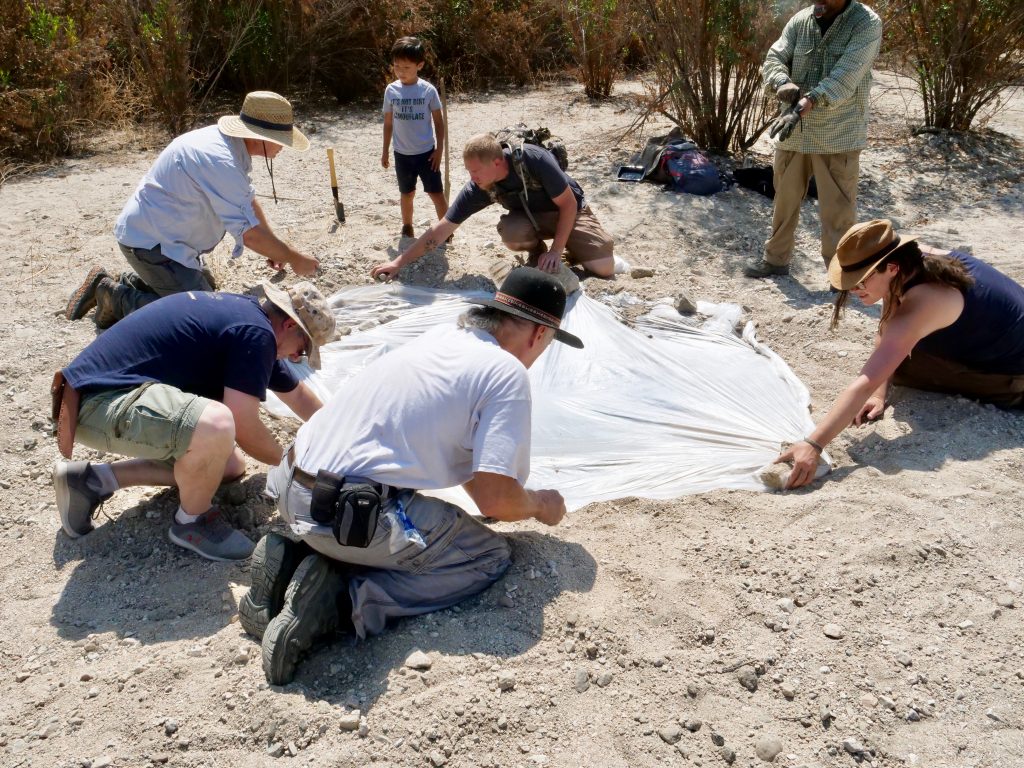 Comparing the Transpiration Bag with the Solar still, we certainly received more water from the bag at a faster rate than we did the still.  But again, keep in mind, you construct this in combination with other set ups at several locations, and things are starting to look good.

Lesson #3 – How much water a day does a person truly need?

I have always been schooled that we need at least 1 gallon of water per day, however, in this class it was broken down to 11 gallons of water per day, per person. Why? How? Seems like a lot, right? Christopher stated that by the time you use water in a cook pot throughout the day, clean ourselves and basic hydration, one gallon is nowhere near the needed allotment of water.   Based on his research and knowledge, the more water you can have the better.  I would agree with him and often, I think we tend to go with the status quo of what FEMA has told us or we have heard on some television program. Over and over we hear the one gallon per day per person is adequate, however, I now have a different opinion.

One student had asked if water was safe to drink if you see Green Algae in it.  Personally I would have thought not, but learned that green algae is actually a protein and fine to drink.

Again its doing your research, taking classes and reading books and Off-Grid magazine that makes all the lifesaving difference in the world.

When a catastrophic event happens, we see the people fighting at the store for water and supplies.  The looting we witnessed on the news gives us a solid picture into exactly what happens when the grid goes down and people are left to run wild. So how do we keep ourselves and our family safe when chaos takes over and we need water? Let’s look at both “Obvious” and “Not So Obvious” sources of water in the urban environment.

Swimming pools: Throughout our neighborhoods we have swimming pools with thousands of gallons of water.  Work with your neighbors and talk about water sources. Yes there are chemicals or in many private pools there is a “salt system”.  Nothing that can’t be boiled or worked with to be sure you have the needed life sustaining liquid.

The average home water heater has 40 gallons of usable water in it.

Tip #2 Toilet tanks: The first thought is “there’s no way”, But keep in mind that a flushed toilet fills with clean water and holds up to 7 gallons.

Tip #3 Draining the water from house pipes:  To keep pipes from freezing in the colder environments we turn the water off when we leave and drain the pipes.  Think about when water stops at the street main.  We still have a fair amount of water in the pipes and this is a space we often don’t think about.

Tip #4 Water stored for an emergency: From bottled water. To outside water barrels and catchments.

Tip #5 Reservoirs: Most cities have some form of a water catchment basin or a reservoir.  Know where yours is and be ready to use it if necessary!

Not so obvious sources:

Tip #1 Collecting rainwater:  During an emergency, Joe Q public focuses on bottled water or the lack thereof.  If we are in a rainy environment or a hurricane situation, put out trash cans.  Fill the bath tub

Purchase 55 gallon water drums and store in a cool place.

Other open sources of water

There have been discussions about using ocean water and we have heard the stories of people in survival situations stranded in the middle of the ocean drinking salt water, with not such a good outcome.  Drinking ocean water is just not an option in its full salinity.  However what many are not aware of is the story about famed explorer Thor Heyerdahl in his epic voyages across the sea.  They in fact drank sea water and as his journals reflect, they had clean water onboard and through trial and error came to a water consistency of around 60/40.  60% clean water to 40% ocean water.  This combination sustained them with no ill effects throughout multiple journeys.

The end of the day came with the class preparing a soup with the edibles picked throughout the day.  Building a simple small fire, adding the ingredients and a bit of spices, much to my surprise it was really good.  Following that a test of the days knowledge was handed out and as I hated school, this class, I actually enjoyed. 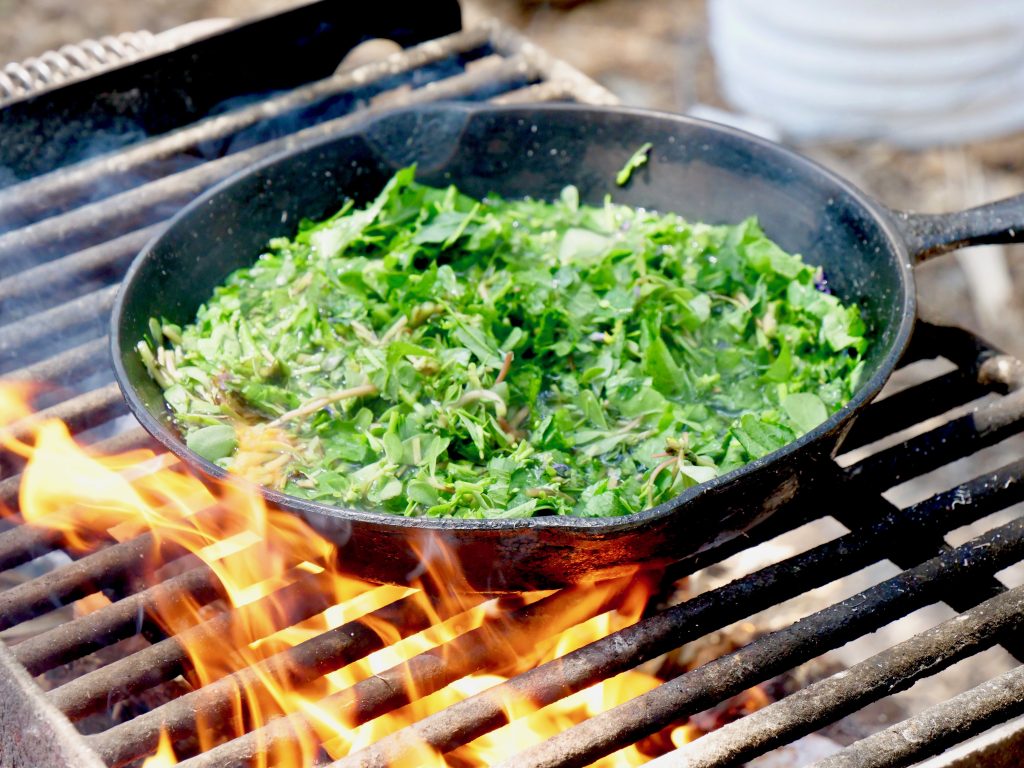 Spending time with Nyerges and his School of Self Reliance you find that this man is very humble with a witty sense of humor.  He holds a variety of classes throughout the year primarily held in the Arroyo Seco in Pasadena, California. His most recent book “How To Survive Anywhere” is a best seller and on its second edition.  A good read for anyone that takes their survival serious.

There have been a lot of survival school come and go over the years and when asked why he feels his has lasted so long, he simply says, “I love what I do and I feel it’s important for us to be connected to earth.  If it was about money or prestige, I would have found something else to do”.

With LA’s history of earthquakes and mudslides, the “experts” say it’s only a matter of time till the big one hits.  With the population of Los Angeles County at over 10 Million people, the value of taking a class like this is truly unmeasurable.

After returning home to North Carolina we were hit with Hurricane Florence.  What I learned during this class was eye opening.  It gave me a new perspective as the news reports were describing how the stores were out of water, milk and basic goods.  All the while people are panicking and I found myself in a different state of mind knowing I have a new skill set that provided me with several options.

For more information on Christopher Nyergis and the School of Self Reliance.  www.schoolofself-reliance.com or www.christophernyerges.com