Should You Learn to Shoot with Optics or Iron Sights

These days you’ll rarely see AR15 rifles marketed without some optical system such as a ruggedized miniature reflex red dot mounted or high-power scope on top of the rifle’s upper receiver. 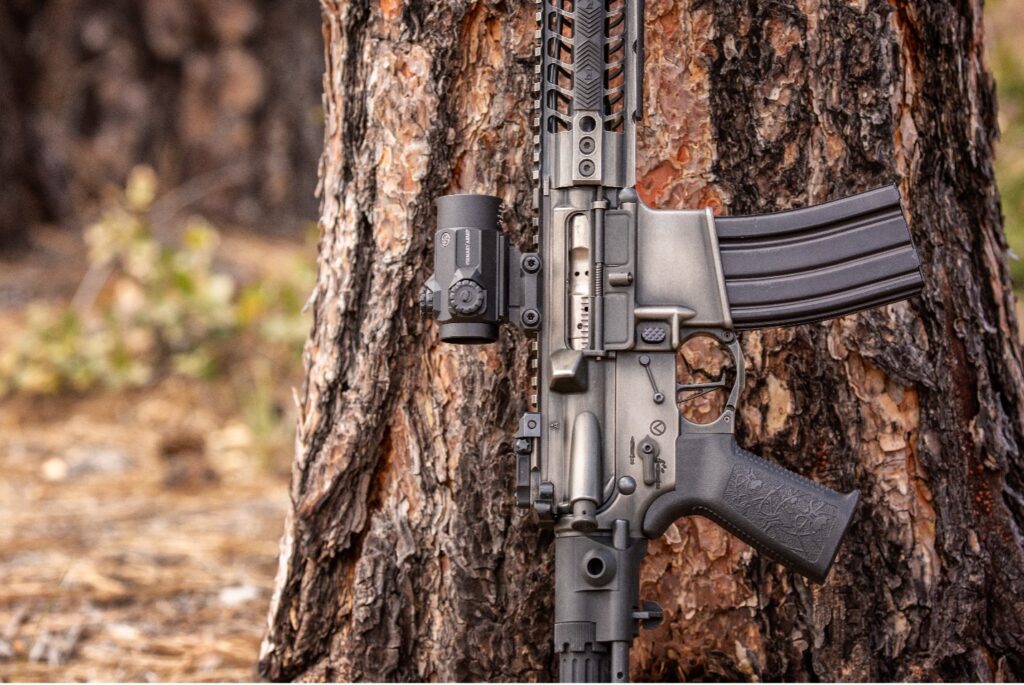 However, and for several reasons, this doesn’t mean you should automatically conclude you’ll need to learn to shoot with optical systems at the beginning of your AR15 shooting adventure.

While choosing to shoot “iron” or “optic” is essentially a personal choice depending on your favorite style of shooting, there are a few comparisons you’ll need to consider before you choose. Compared with optic sight systems, you’ll quickly discover one of the most apparent benefits, and that is iron sights are cheaper.

Typically, these sighting systems are included as part of the original AR15 upper receiver regardless of whether it’s a factory build or a DIY budget build.

Using iron sights doesn’t require batteries that go dead at the most inconvenient times, and because of their overall size, they don’t add much weight. While many optic systems these days withstand fog and water intrusion, you won’t have to worry about a set of iron sights fogging up or getting damaged when immersed in water.

Lastly, shooting with iron sights will offer you a primary shooting reference point at the minimum.

Conversely, shooting with an excellent optic system helps you acquire the target much quicker. Iron shooting means you must focus on the front sight post, whereas shooting with an optical system like a red dot means concentrating specifically on the target itself.

Additionally, you need to understand there’s no such thing as parallax adjustment when shooting with iron sights. In the world of firearms, parallax is a lot simpler than the word indicates. 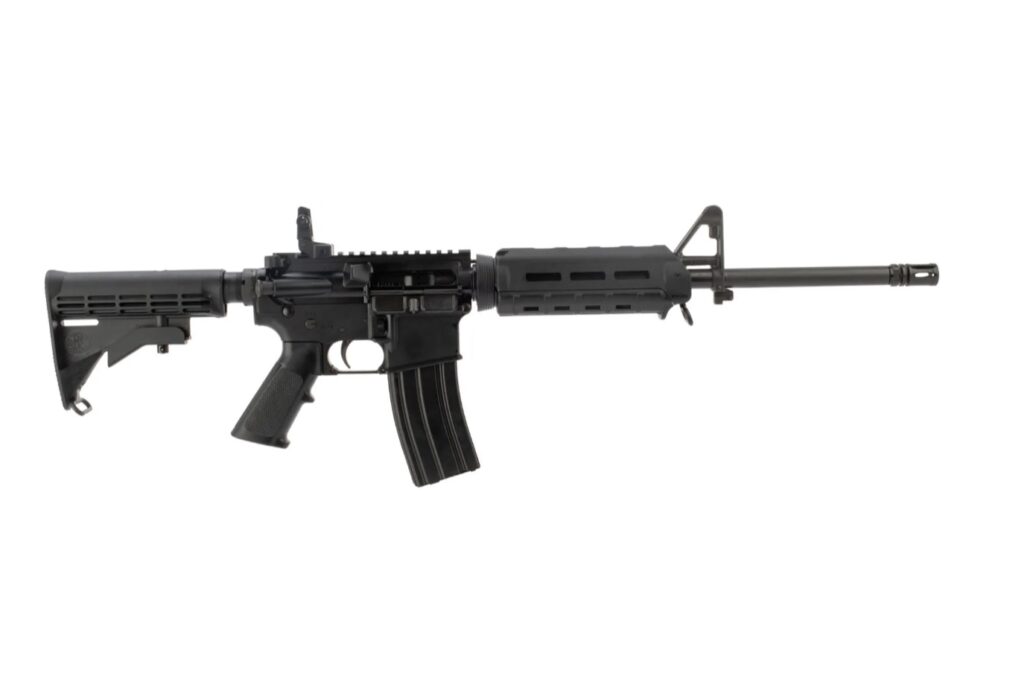 When sighting in on a target with iron sights, the image of the front sight post will shift in focus as your stance and eye focus change, making the shot a little more challenging. Most optics these days allow for parallax-free adjustment at stated yards such as seventy-five to one hundred yards.

A more extended shot using iron sights may also require a degree in ballistics because you’ll need to compute bullet drop compensation, windage, and elevation adjustments on the fly while attempting to aim the front sight post in the correct position for a precision shot.

With an optic system, you’ll also maintain quicker and more accurate target acquisition before, during, and after the shot. Something that’s not possible when shooting with irons because your focus needs to be on lining up the front sight post, ideally between the back sight posts.

Before choosing an optical system for your AR15 or even your semi-automatic pistol, learning how to shoot with iron sights first is not necessarily an accurate assumption. 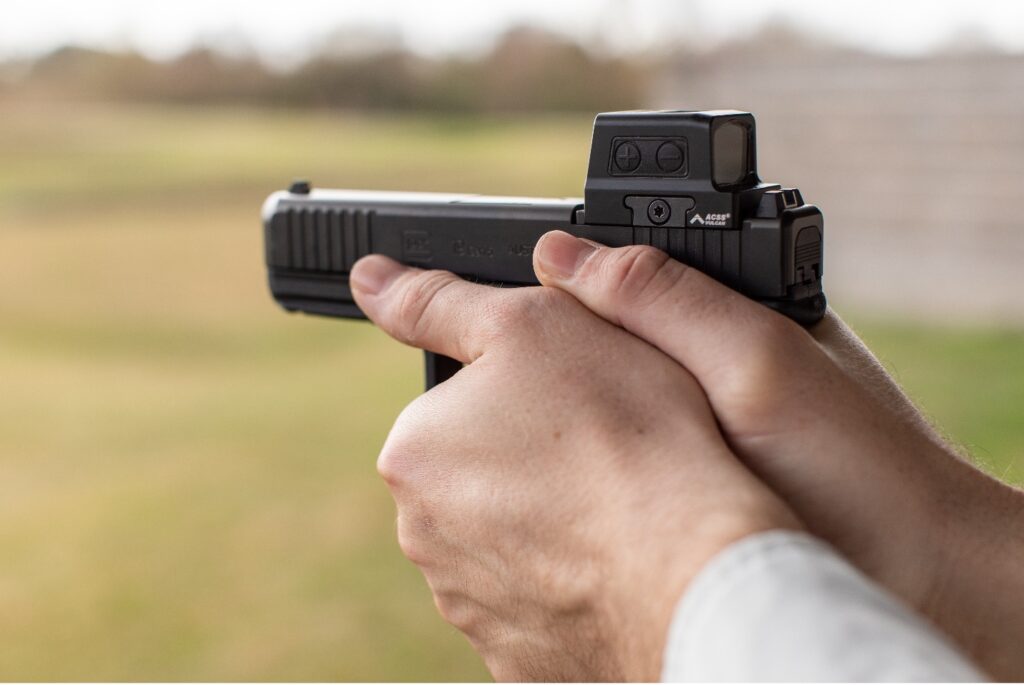 Fundamentally, you need to practice only a few things when learning how to shoot: maintaining a steady firing position, proper aiming, and target acquisition, controlling your breathing, and squeezing the trigger until the break surprises you when you take the shot.

These fundamental exercises aren’t specific to a sighting system and don’t alter between shooting with iron sights or optical systems. When it comes to the art of shooting, the fundamentals of learning how to shoot stay the same regardless.

When it comes to aiming while practicing with either iron sights or optical, you can granulate the process into two primary buckets, alignment, and sight picture. Sight alignment typically means proper alignment of the front iron post with the dovetail sights or aperture at the rear of the gun.

Remember, if you’re focusing on the front sight post, the challenge will be keeping the front peg on the target where it needs to be. While this is true with an optic system, centering the optic on the target is a matter of minute adjustment to minimize parallax distortion or the shadow created by the optical system itself.

Mastering a good sight picture is merely the act of putting the reticle or front sight post when shooting with iron on the correct point where the shot needs to impact. With iron and optical sighting systems, long-shot windage and elevation correction are necessary.

Remember, you have a choice. Shooting longer distance shots with iron sights may allow you the opportunity to brush up on your ballistic degree, or you can let a quality optic system with an MOA reticle do the job for you.

The shorter the sight plane, such as iron sights on a pistol, the blurrier the target will appear. Although, with a more extended sight plane such as an AR15 rifle, you’ll experience a much better sighting ability. Still, the truth is you’ll probably not be able to acquire the target intuitively and quickly with iron sights as well as you will with an optical system.

Another thing to remember is that Karma can sometimes be a cruel mistress or master. If you spend your days at the range learning how to make precision shots with an optical system such as a red dot RMR sight, what will you do when the power on your optical system gives up the ghost at the beginning or in the middle of a hunting trip?

Even worse, how will you manage a shot if the optical system takes a savage bump that knocks it out of alignment and renders it unusable until you can have it checked out and repaired or replaced by the manufacturer?

If part of your gear didn’t include a fresh set of batteries, or your optical sight somehow ends up unusable you might find yourself in a position where you either continue the hunt using preexisting iron sights or turn around and head home.

In this case, all those hours practicing at the range with a quality optic system won’t help you acquire targets and place the perfect shot if you’ve spent all your time learning to shoot with optics and you must rely on sighting through iron sights and hitting the target.