You are at Home Gear Situation Awareness: Know Your Surroundings

Dangers are all around us.  Some are obvious, but many not so much.  That means having to stay alert at all times no matter where you are.  Some of these potential hazards include predatory threats, but far more have nothing to do with predation.  How many people die or are severely injured by stepping into old wells or cellar holes in the woods?  How many people have been swept away from the unstable banks of swollen rivers or have fallen through unsafe ice?  How about a fire in a restaurant or movie theatre?  Even ice falling from a building’s roof can prove fatal.  Most of these potential dangers can be avoided by being aware of your surroundings and using a little common sense. 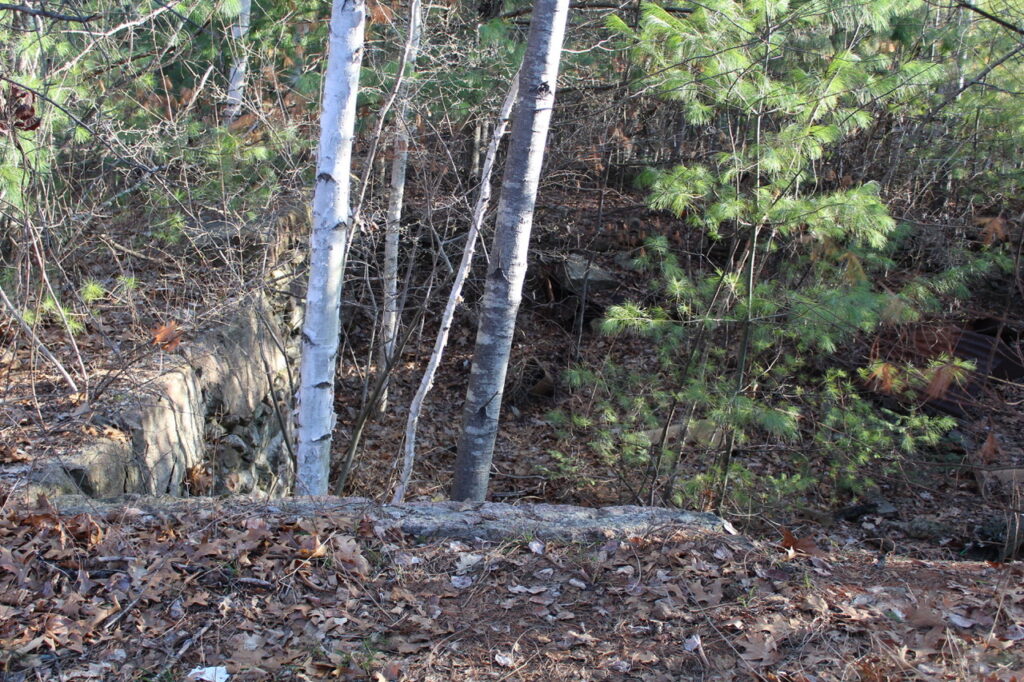 Col. Jeff Cooper’s color coded chart has become the basis to go by for situational awareness.  The following is my adaptation to Col. Cooper’s list:

Staying out of a potentially bad situation is always the best policy.  Listen to that “little voice” in your head.  Do you really need to travel through that dark alley or cross a slippery log across a swollen stream?  If not, then don’t.

Detect possible issues before they happen then refer to step one.  Be aware of that person coming up behind you or spot that rattlesnake before it is too late.  Even the best camouflaged predator (animal or human) can be spotted if you keep your eyes moving).

In urban areas learn where the dangerous areas are and then refer back to step one.  Before heading out on a trek learn about the plants and animals you may encounter.  Are there natural features that could give you problems?  Listen to weather reports before heading out and heed all warning signs.

Whether in a populated area or in a rural setting, going it alone will sooner or later lead to trouble.  Ideally it is best to travel in pairs.  If you can’t, then at least tell someone where you are going and when to expect you back.  In wild areas leave a note in your vehicle.

A great many of the potential dangers are ones that have originated with humans.  I often hear people divide areas into what they consider “wilderness” and areas “touched by humans” as if there is a difference.  I prefer to use the terms “natural” and “man-made”. 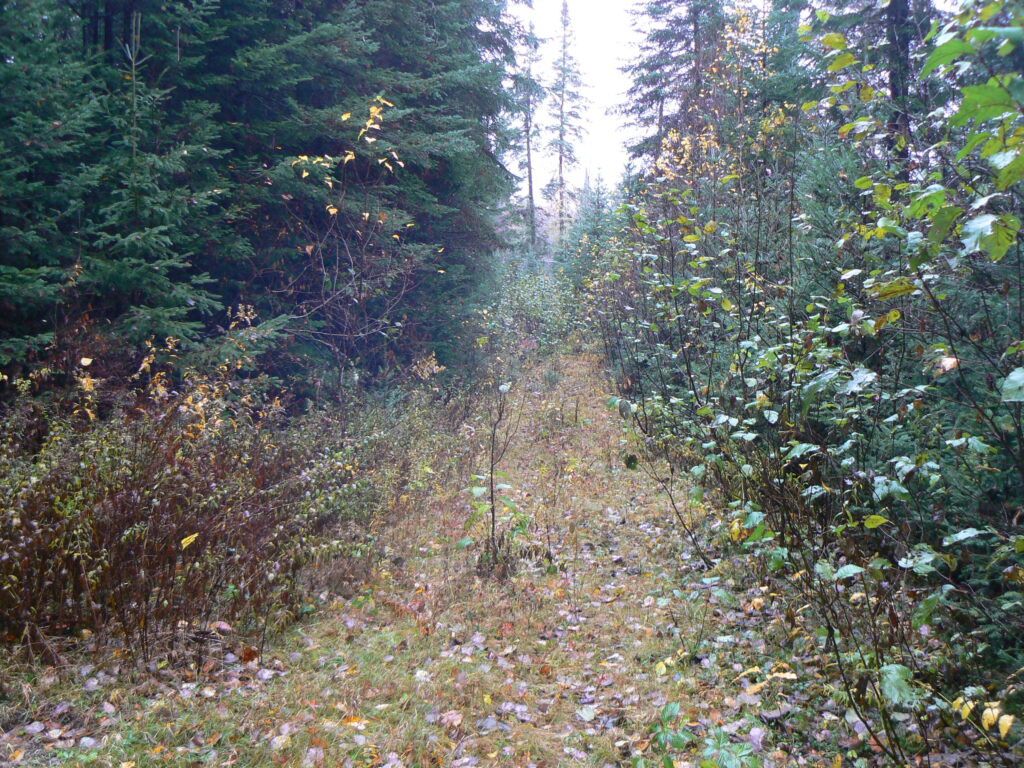 Where I live in New Hampshire you usually do not have to travel too far into the forest before you start finding the remnants of past human habitation.  Stone walls, the remains of early farming settlements, crisscross everywhere.  Why is this important?  Where there are stone walls there is likely to be old wells and cellar holes covered by hundreds of years of debris and brush; unseen and very dangerous.

Many hikers and hunters have fallen victim to these hidden traps because they didn’t take the clues seriously.  Being so focus on their goal they fail to be aware of the entire situation.  Even the best of us can, and have, fall victim to some of these “traps”.  Even being fully aware that I was hunting in an overgrown farmstead of old, and watching for depressions in the undergrowth which would indicate a well or cellar hole, I got hung up on a mysterious strand of old barbed wire that was strung low between two trees.  No real damage was done, but it shows that the danger is there.

When I travel to densely populated urban areas my awareness levels are heightened.  Yes, there are threats from people with bad intent, but I am much more concerned with other things like being run over by cars and trucks, falling into an open manhole, needles and broken glass and ice falling from rooftops.  I watch where I walk and my eyes are constantly scanning the area.  In movie theatres and restaurants I always scan the area, find the exits and sit with my back to the wall if possible.  Why?  Because I want to get out fast if I have to and I want to spot potential dangers before they happen.

When people get out in the natural world they seem to focus strictly on the most visible, or the most covered, possible threats; large predators.  While you should always be aware of these possible dangers, people are more likely to be severely stung by wasps and hornets or bitten by a snake than they are to be attacked by a bear. 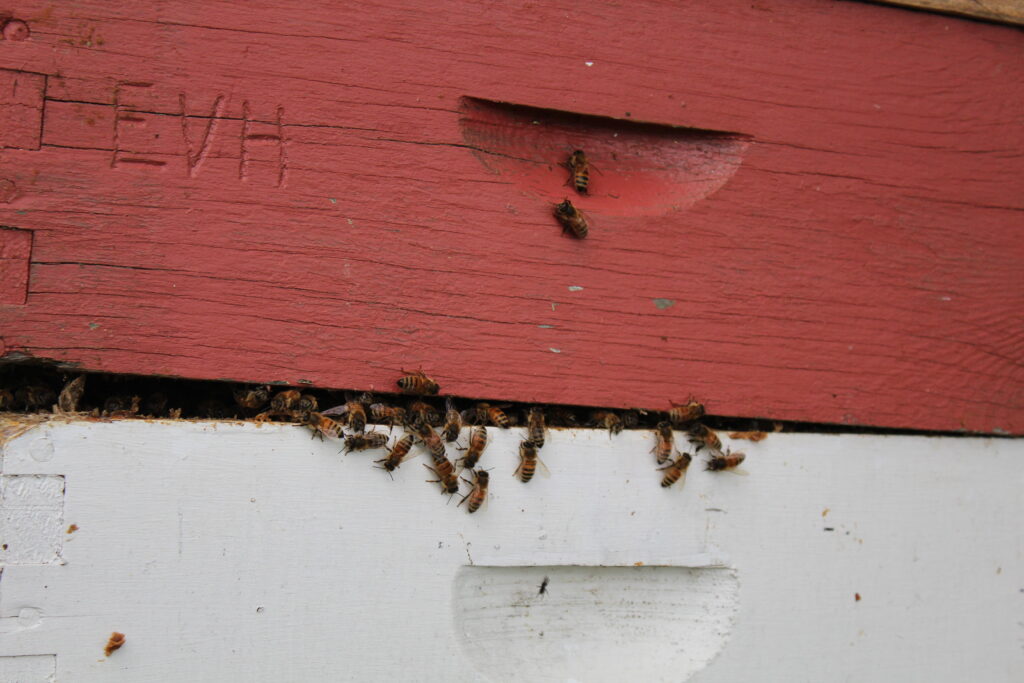 Most people will never find a bear or a mountain lion in their backyard, but all of us, whether we live in a rural or urban setting, will face wasps and hornets sooner or later.  According to the CDC (Center for Disease Control) the U.S. averages 62 deaths per year from hornet, wasp and bee stings.

Most bees, with the exception of the Africanized-honey bees, are not aggressive unless you disturb the hive.  The same cannot be said for wasps and hornets.  The trick is to locate the nest and eliminate it.  Unlike bees, which travel great distances to gather pollen, wasps and hornets are either flying from a nearby nest or searching for an area to build a nest.  Watch where they go and you will likely find the nest.  People who don’t pay attention open themselves to getting stung.

While in Arizona I dropped my guard.  I was in Sedona with friends to hike in the hills. I was prepared for snakes, but I hadn’t even thought about “bees” and that is where I went wrong.  As we hiked into a canyon I looked up and there, under a rock overhang was a huge nest.  While we never approached the nest, the “bees” were extremely upset.  Back at the top I kicked myself for dropping the ball.  I didn’t take all possible situations into account.  Don’t make the same mistake. 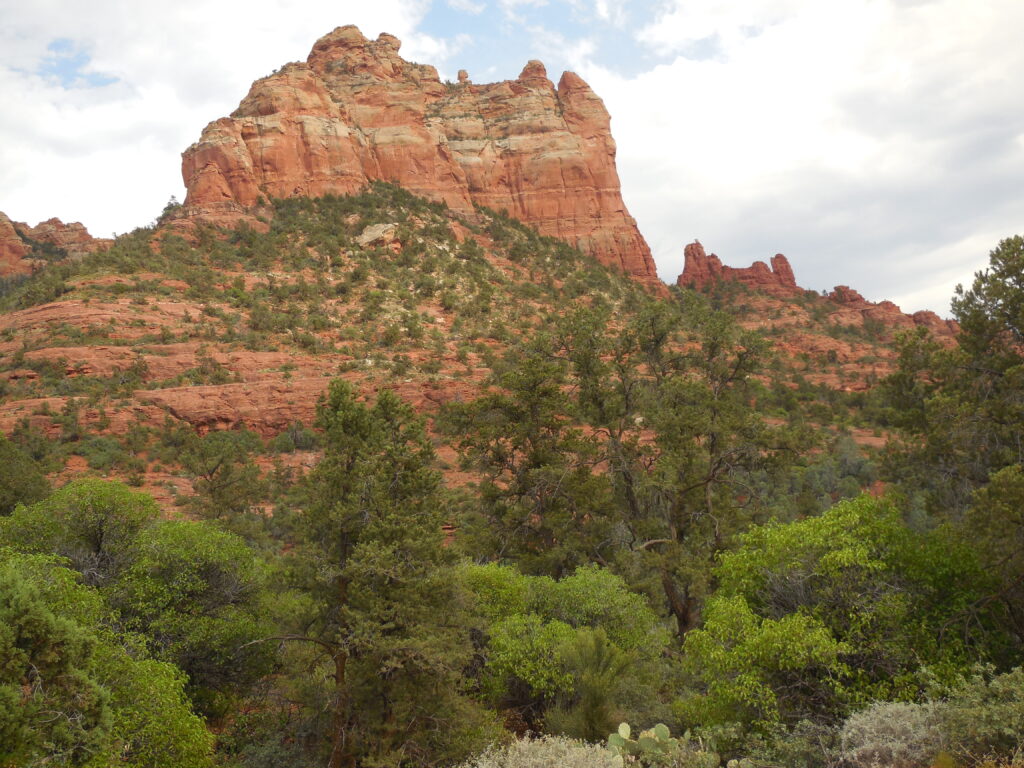 Venomous snakes are found throughout the United States, except Hawaii and Alaska.  My travels often take me to places where venomous snakes are very common, so wherever I travel I need to be aware of the potential dangers and do whatever I can to avoid them.  The CDC estimates that 7,000-8,000 people per year are bitten by venomous snakes and about 5% of these people die.  I don’t want to be one of them.

Snake bites can happen anywhere.  Snakes normally bite when they are startled or feel threatened.  If they can escape they will.  In the wild, snakes have space to escape, but about those snakes curled up in the woodpile near your home?  How about under your stairs or in your shrubs?  If you are in venomous snake territory use extreme caution before you reach your hands into anywhere that you cannot see clearly.

Animals are not the only natural dangers that one needs to be aware of.  Swollen streams, thin ice, broken limbs dangling high overhead and potentially severe weather are all situations that you need to be aware of. 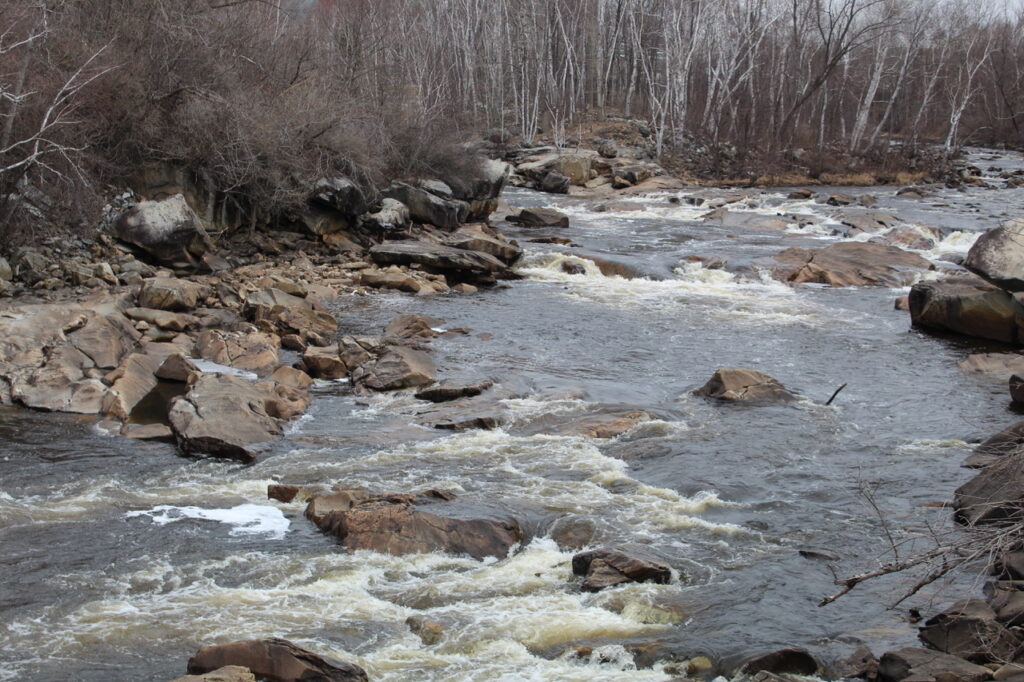 April 1st is the opening day of trout season in most of the Northeast.  Anglers who have spent the better part of six months cooped up are half crazy as they rush to any waterbody that is free of ice.  Here lies the problem.  Streams, brooks and rivers are usually swollen with snow melt and Spring rains and the water is extremely cold.  The water is usually high and moving fast and the banks are soft and weakened. All put together this is a very dangerous situation.

If you fall in, even with a PFD (personal Floatation Device), your chances are slim. Hypothermia can set in in a matter of minutes.  You need to get out and get warm quickly if you hope to survive.  Is there any trout worth all of this? 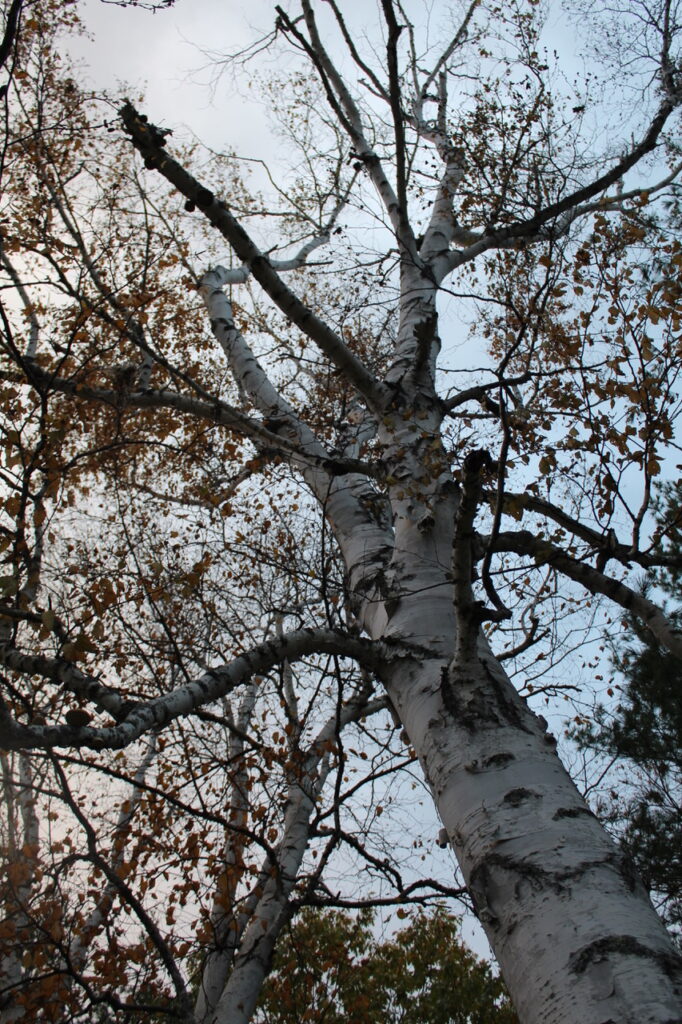 As you walk in the woods, a city park or anywhere there are tall trees, look up.  There is a danger lurking in the tree tops known as a “widow maker” that can take you out in an instant.  “Widow makers” are dead tree branches, or even an entire tree, that have broken free, possibly due to a storm, and are hung up and waiting for just the right moment to fall.  Stay far away from these if at all possible as the slightest breeze can bring them down.  Even a relatively small tree limb can prove fatal when it falls from a great height.  This is a dangerous situation that can present itself at anytime.  While in the woods my eyes are constantly moving as you never know when you will be put in such a situation.

Weather is a big, yet often overlooked factor.  A sudden change in the weather can turn a fine day into a life threatening situation.  Before venturing anywhere know what type of weather conditions you are likely to expect.  Realize that even a few feet in elevation can make a big difference.

Every year hikers are rescued off our mountains because they were not prepared for changing weather conditions.  At the base of the mountain it could be 80 degrees, but at the top it could be 30 degrees with high winds and whiteout conditions.  If you are wearing shorts and sneakers you could quickly become a statistic. 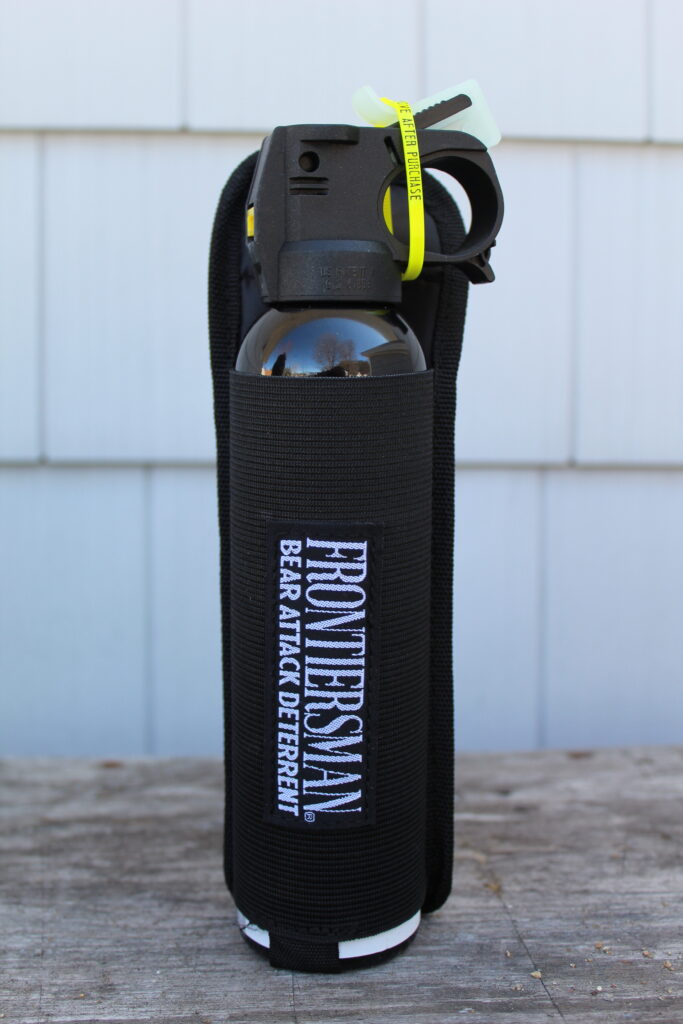 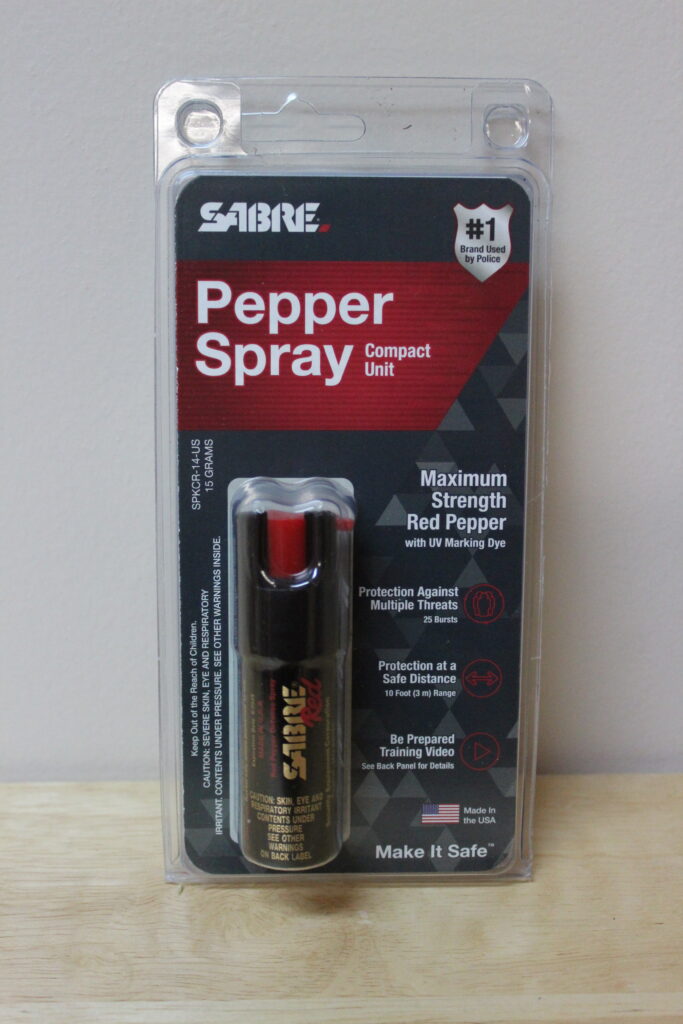 When a situation happens you need to be prepared to act.  The following is a short list of items to carry.

When in an urban area I carry pepper spray.  While it will not subdue any potential attacker it may buy you time to get away.  Bear spray is a bit extreme to use on people, but it is a good deterrent on bears, mountain lions, coyotes or dogs.  Like with pepper spray, it may buy you some time.

A cell phone is good (as long as it is turned on and you are not distracted by it).  If you find yourself in a questionable situation call for help and keep the other person on the line.  In the woods I carry a two-way radio that allows me to contact emergency personal if needed.

Having a good first-aid kit could make all the difference.  If someone is attacked, either by a human or animal or fall down a cliff, they may need medical help right away.  You just may be the first person on the scene.

There is no trick to situational awareness.  All it really takes is the use of common sense.  Simply, do not put yourself in a dangerous situation and be observant of everything going on around you. 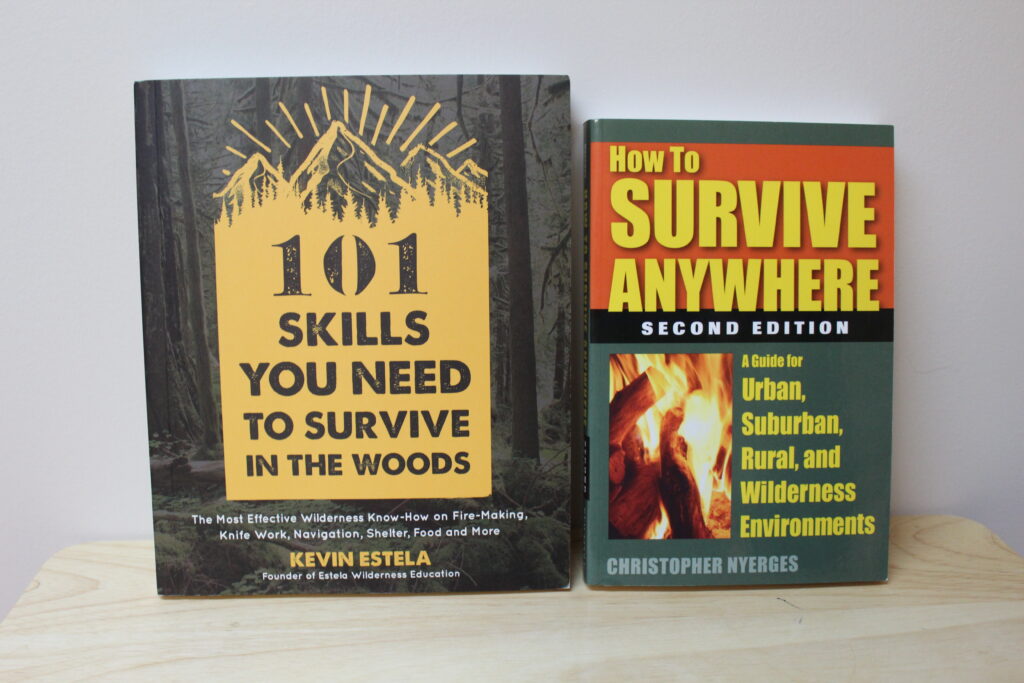