You are at Home Firearms So You Want a Handgun: Things You Need to Know

So You Want a Handgun: Things You Need to Know

I recently visited Manchester Firing Line, an indoor shooting range near my home, to put a few rounds downrange with my XDS .45ACP.  While there I ran into a mother and a pre-teen young man doing the same thing.  They were using both a .380 and a 9mm handguns.  While I was using my .45ACP, the results and the reasons were the same; to hone our self-defense skills.  As I watched them shoot, I wondered to myself why handguns and not long arms? 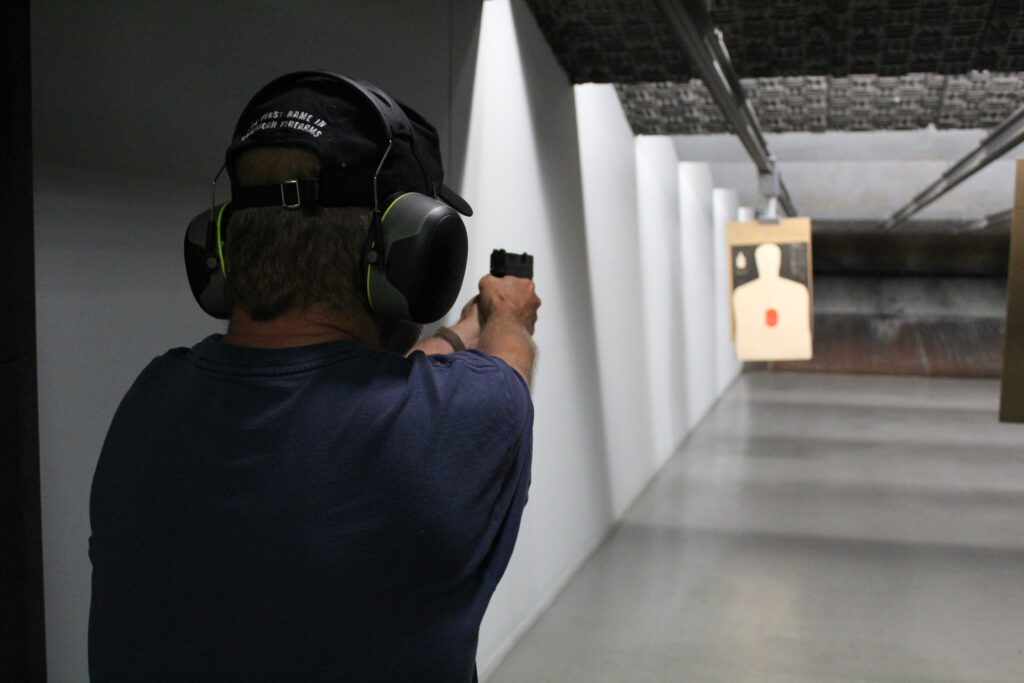 When I first learned to shoot it was with a bolt-action .410 shotgun and a .22 rifle.  My family didn’t own a handgun.  To this day I prefer rifles and shotguns as defensive weapons.  With that being said, handguns do have their place.  If you are going to purchase and rely upon a handgun there are things that you need to know.

Before you run out and purchase any firearm, ask yourself “Why?” If you can’t honestly answer this question sensibly, then a firearm is not for you.  The purchase of any firearm should never be an impulse buy and they shouldn’t be bought because it is the “cool” thing to do.  Firearms are tools, dangerous tools that need to be treated with upmost respect.

Do your homework.  Know what you are looking for, how much you are willing to pay and what your main purpose for purchasing a handgun.  Do you want a semi-automatic or a revolver?  I recently purchased a Heritage .22LR single-action revolver.  The handgun is one I will use to teach my daughter and granddaughters how to shoot and properly handle a firearm.  I had done my research and knew exactly what I wanted.  The salesperson tried to sell me a double-action revolver for much more money.  Once he knew I was serious about what I wanted, he backed down and I actually purchased the handgun for less than I had planned to pay. 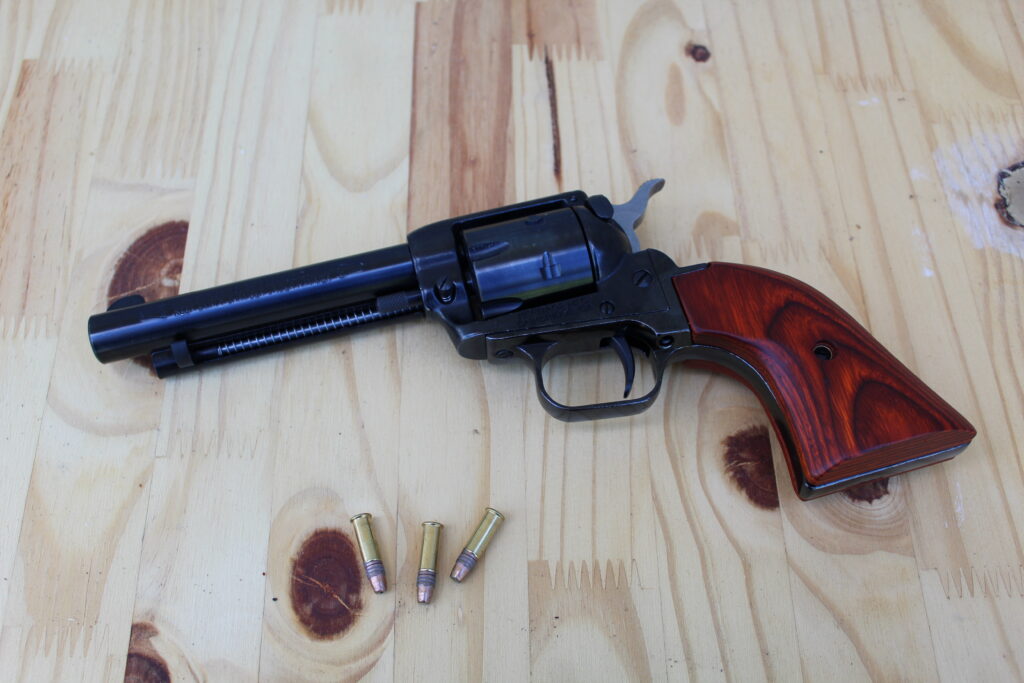 Heritage single-action .22LR revolver.  The perfect firearm for the shooter just starting out.

What Do You Plan on Using It For?

What are your main intentions for the handgun?  Do you plan to hunt with it?  Is it mainly for self-defense?  Do you just intend to shoot targets at the range?  How you answer these questions will help determine what handgun is the best for you.  There are many different handguns out there.  There are revolvers and semi-automatics.  Short barrels and long; and way too many calibers to list.  Each one has its place and purpose.

If your main intention is just to have a handgun to take to the range and shoot targets, then you can’t go wrong with either a revolver or semi-automatic chambered for .22LR.  These are also great firearms for teaching people how to shoot and firearm safety.  These handguns come in a variety of sizes, though for target shooting I have found that a four or six inch barrel is perfect.

Here the choices increase and it is something you should really investigate.  I recommend going to a place that will allow you to try different firearms and different calibers.  The range I go to, Manchester Firing Line, allows you to rent different handguns and shoot them.  You don’t want more gun than you can handle. 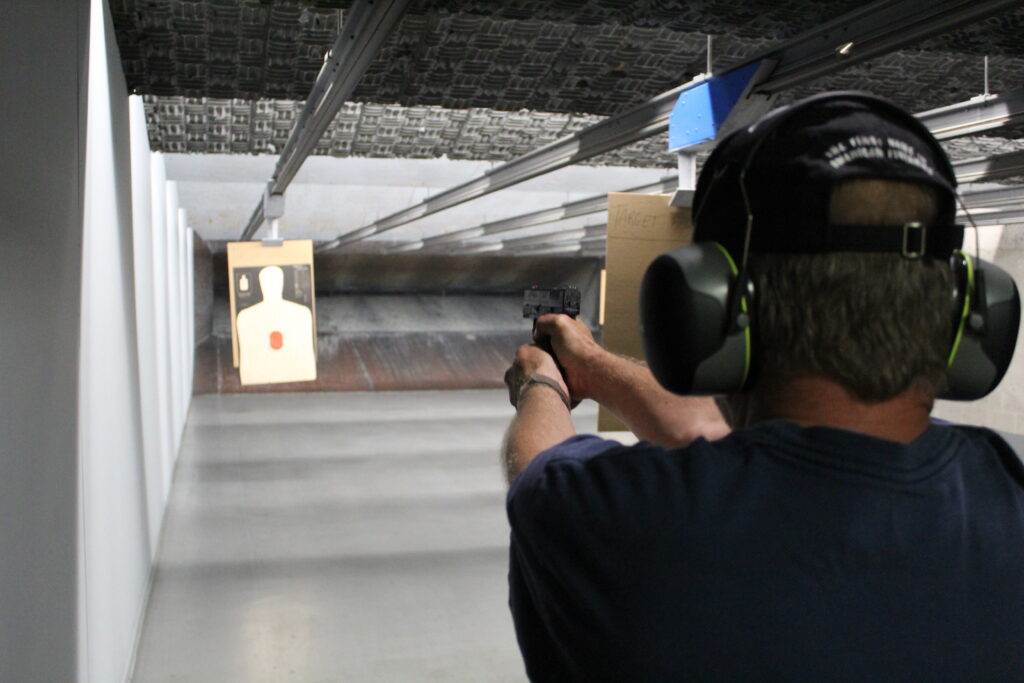 While there are hunters out there who do hunt specifically with handguns, the vast majority of hunters carry handguns as backup.  When I go hunting, even bird hunting, I carry my Springfield XDS .45ACP as my backup gun.  Why?  Well, more than once I have encountered a bear or coyote while turkey or grouse hunting.  I don’t like relying on birdshot in these instances. 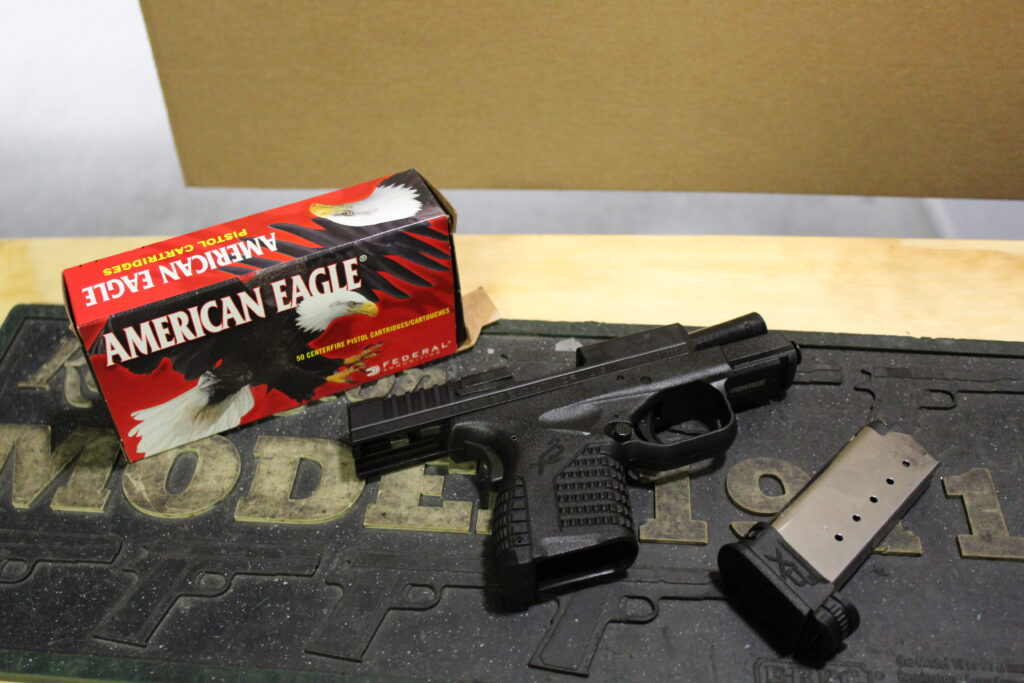 For small game, (squirrels, rabbits, porcupines, etc.) I would stick to the old reliable .22LR.  In this case, the longer the barrel, the greater the distance and accuracy of your shots.  Just be aware that the longer barrels are heavier.

In areas where larger game is more likely to be encountered, you will want larger caliber handguns.  Good choices include .357 Mag., .44 Mag., 10mm, .45LC, and .45ACP.  I know someone who carries a .40 with them, but to me, that is just on the edge of being effective and by no means is a 9mm large enough.  While I hunt using long guns, there may be times where the long gun can be more or a hindrance than an asset.  An example of this include going into heavy brush after a potentially wounded bear or hog.

The responsibility just starts with the purchase of the handgun.  Just because you own a handgun doesn’t mean you know how to use it, and use it safely.  It is your responsibility to fully understand how the firearm works, how to solve problems and how to be safe when carrying and using the firearm.  Start by reading the manual that comes with your handgun, before you load a single round in it.  Each handgun is different so make sure you are familiar with it before you head to the range. 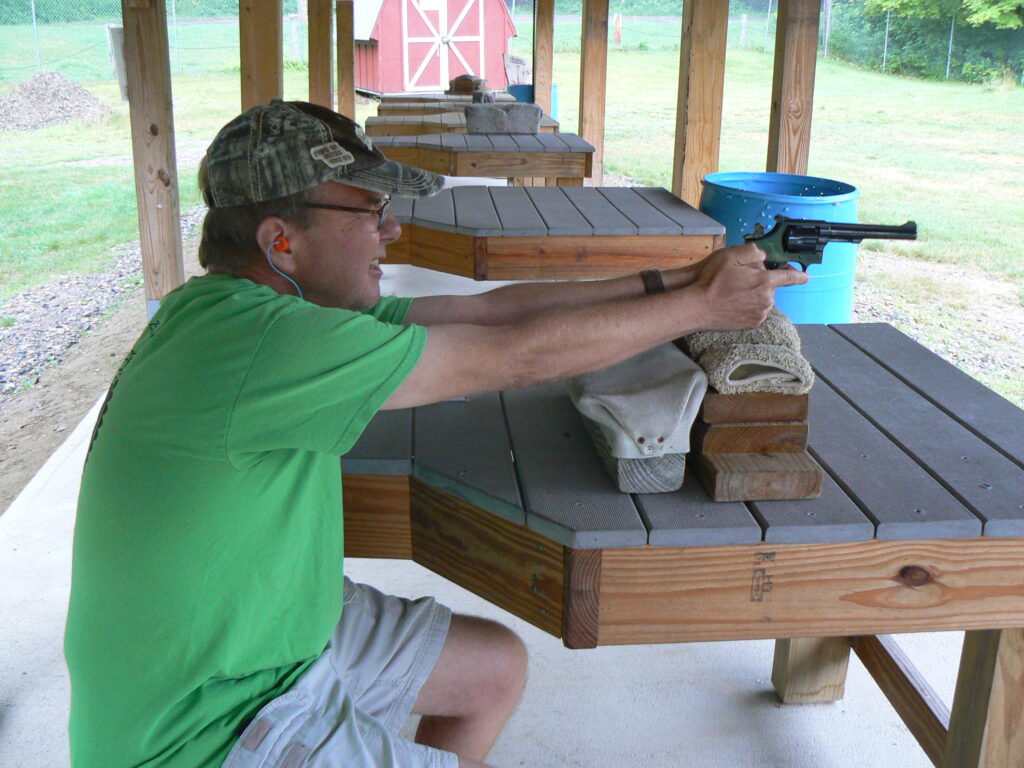 Safety starts with proper control and that is only accomplished by constant practice.  If you are new to using a handgun, start by taking a class taught by professionals.  When I teach people to shoot I spend a great deal of time on safety, proper stance and gun control; all before a single round is loaded.  You need to know the mechanics before anything else.  When we finally get to the range, I am always watching the student to make sure they are doing what I had taught them.  I correct as needed.  If a safety rule is violated all shooting stops and we go back to the beginning.

If you plan on carrying your handgun you must do it safely.  Accidental discharges can, and do, happen.  Handguns can go off if they are accidentally dropped or when you accidentally touch the trigger when drawing it from the holster.  Don’t rely upon the mechanical safety on the firearm to keep accidents from happening.

Some firearms don’t have a mechanical safety and some have more than one.  It is up to you to know your firearm.  With revolvers, most manufacturers recommend that you let the hammer rest on an empty chamber when carrying.  Even though my Springfield XDs has multiple safety features, very rarely will I carry it with a round chambered.  It doesn’t take much to load one in the chamber when needed.  The bottom line is that it is always best to error on the side of safety.

Like with everything else, there are pros and cons that come with handguns.  As long as you understand this, you can deal with them. 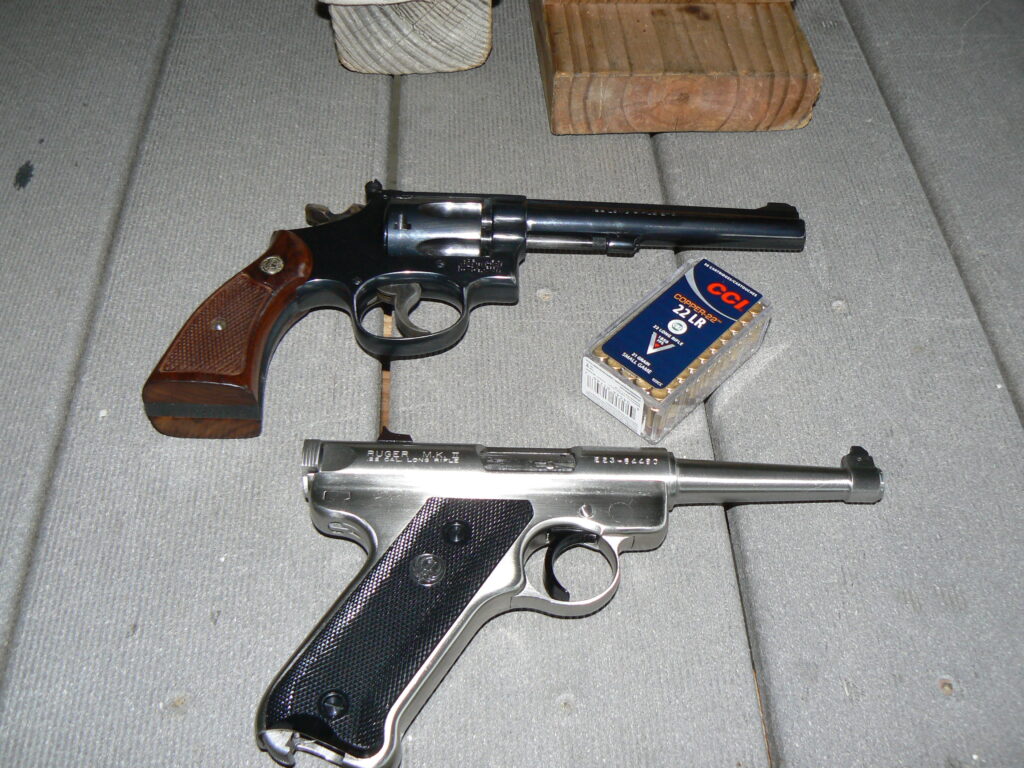 These handguns are those where the ammunition is feed by the use of a detachable magazine.  Gas from the first round drives the bolt back, allowing another round to be automatically fed into the chamber.  The number of rounds that can be fired is only limited to the number of rounds in the magazine.

These handguns operate strictly on a mechanical system involving a rotating cylinder which holds the rounds.  When the external hammer is pulled back, the cylinder rotates, putting a round into position to be fired.  Revolvers are capable of holding between six and nine rounds, depending on the handgun.  Revolvers are available in either single or double action. With single-action revolvers, the hammer must be manually pulled back for each shot.  A double action revolver automatically rotates the cylinder into place for the next shot when squeeze the trigger.

Firearms, of all sorts, are tools.  The Benner household has numerous firearms, both handguns and long guns, and each one has a purpose.  Unless they are going to be used, or cleaned, they remain locked up.  I don’t wear my handguns like they are a piece of jewelry.  I don’t carry my handgun to show off nor have people look at me.  For safety sake, I don’t broadcast that I am carrying and I don’t carry all of the time.  You just never know if I am carrying or not, and that is how I like it.

If you are a handgun owner, then you owe it to yourself to receive proper training and to practice often.  It is not uncommon that you find me renting a lane at Manchester Firing Line just to keep me sharp.  You need to know the limitations of your handgun, and more importantly, your own limitations.  Always, always, always safety has to be in the forefront of your mind.  Accidents do happen, but most of those accidents can be avoided.  You owe it to yourself, your family and the people around you to treat your handgun with upmost respect.