With it’s release at the NRA Show this past April, the Springfield Armory XD-E was met with great review…on the first day of the show. The days to follow had a little more hiccups than expected – the donations of money towards an anti-gun bill in Illinois. But I digress. The XD-E is Springfield’s entry into the double action/single action 9mm subcompact field of pistols. The growing popular XD-S is among one of the top concealed carry pistols that is being sold on the market to date. So, how does the polymer frame XD-E stack up against the rest? Well, let’s take a look at it. 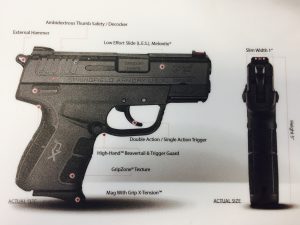 I was fortunate enough to be the first person to view this pistol while visiting my local gun shop, Clayton Guns, just as they were getting it in. I must say, my first impressions of this pistol are pretty decent. When placing this pistol in my hand, I really like the overall feel and weight of this pistol. With it’s overall length coming in at 6.75″, overall width at 1″, and overall height coming in at 5″, this little 1.56lbs hammer-fired pistol will make a great addition to the single-stack pistols out on the market today.

When it comes down to the trigger pull, eh…it could have been better. The trigger, in my opinion, is a little too forward in the DA stage, but I think that’s due to the length of the grip. The trigger pull is averaging 10lbs in double action and averaging 5lbs in single action. The 3.3″ barrel is like most of the Springfield Armory pistols, Hammer Forged Steel, and is a 1:10 twist. 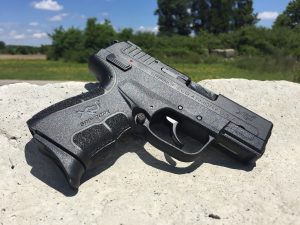 The sights are the standard fiber optic front and two dot rear sight. Downside to these sights, like all the other XD pistols here of late, it makes shooting in the dark a tad bit difficult. I would rather see these pistols come with some sort of night sights, either Trijicon or AmeriGlo. The polymer frame of the XD-E has the MOD.2 Gripzone Texture on the sides and has a rail on the front of the frame to mount a laser or flashlight. 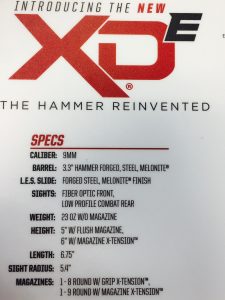 The slide is forged steel with a Melonite finish for long lasting life that comes with nice serrations on the rear. According to Springfield Armory, the slide is their low effort slide, that offers 27% less effort required to manipulate the slide. The ambidextrous safety on the XD-E is in a good spot, but with it being also a decocker, it is almost awkward decocking it because it is slightly small.

As far as holsters go, unfortunately, if you have an XD-S, your holsters will not fit the XD-E. Luckily holsters are readily available through Galco, DeSantis, Crossbreed, Alien Gear, Safariland, Blade Tech, Bravo Concealment, and other custom kydex manufacturers. 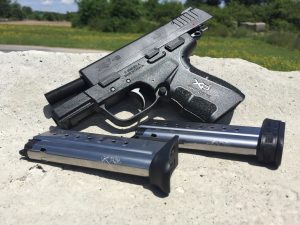 With an MSRP coming in at $519 and selling locally for around $479, it falls almost in-line with the XD-S pistols. Will this pistol be the future of Springfield Armory? I’d like to think so. A lot of people do not like the backstrap safety of the XD-S line of pistols. I honestly don’t mind it. My wife on the other hand, does not like the backstrap safety at all. But the XD-E fixes that problem, but that trigger though. If it wasn’t so far forward on the double action, I think it would be better. But hey…that’s just me. If you are in the market for a new single stack pistol, then check out the Springfield Armory XD-E pistol and see if it’s right for you.