If you’re anything like me, then the protection of yourself and your family is of utmost importance to you. I would contend that none of these less-lethal weapons for self-defense that I will highlight are superior to a firearm in the hands of a well-trained person, but each of them has its place in either civilian or law enforcement arenas. Without further ado, let’s look into some of the most effective and bizarre less-lethal weapons for self-defense that are currently available.

Why Go for a Less-Lethal Weapon for Self-Defense?

First, the term “less-lethal” means exactly what it says. It doesn’t say “not lethal” and it certainly doesn’t say “safe.” From a law enforcement perspective, less-lethal weapons fill a much-needed gap in the use-of-force continuum. From a civilian perspective, less-lethal weapons could be the difference in safety vs. assault, if not life vs. death. I know some of you are probably thinking the same thing I do when considering the effectiveness of less-lethal weapons; that being you’d rather have a firearm than any tool that will be listed below. Let me tell you that I agree. A firearm is the greatest self-defense tool for a violent encounter that has ever been created. In my opinion, the second-best tool to have with you on a daily basis is actually no weapon at all; but more on that at the end.

That said, there are many reasons why a less-lethal weapon could be preferred by some. Some people simply are anti-gun and they refuse to have them in their homes. My brother-in-law and sister-in-law (wife’s side) are exactly this way. They are completely opposed to firearms within their home. Another reason one might not have a firearm is that they live in a dictatorial city like New York or Chicago in which firearm ownership rights are not recognized as they are in much of the rest of the country (which, according to the crime statistics in those two locations doesn’t seem to help much…). In cities like these, a can of pepper spray or a taser may be all that you can legally possess. In that way, less-lethal options become invaluable.

Let’s explore some of the best less-lethal options and you can decide for yourself if any of them may be a good addition to your repertoire.

The taser is perhaps the most obvious less-lethal weapon because of its constant use in TV shows and movies. One myth that I’ll quickly dispel about a taser is that when you are tased (which I have been a few times) you do not just fall to the ground unconscious, as popularly portrayed. Unless the fictional taser that a movie character employs comes with a heavy dose of melatonin inside the barbs (it doesn’t), then I can assure you that going to sleep isn’t part of a taser ride. What is? Pain, electrocution, and the feeling of just getting punched wherever the barbs hit.

One major benefit of a taser is the distance in which you can keep from your potential assailant and still mount an effective defense. This could be beneficial if someone is threatening you but isn’t yet close enough to physically assail you. Sometimes, pointing a taser at someone and them seeing the laser dots on their chest is enough to de-escalate a situation. Additionally, a taser can still be nearly as effective at point-blank range by utilizing its “drive stun” feature. That feature allows you to physically press the taser against an assailant’s body and shock them that way. The cartridge and barbs work best in my opinion, but at least you aren’t totally out of the fight if the bad guy closes the distance before you can shoot the cartridge.

Another benefit of tasers is that nowadays you aren’t limited to single shots like you were only a decade ago. Back then, you’d have one chance of hitting your target before having to reload (a process that isn’t exactly easy to do in the middle of a fight). Now, you can shoot more than one cartridge immediately. Those follow-up shots are a huge bonus.

Tasers can be very effective at stopping an assailant long enough for you to flee, but remember that the person is only immobilized for five seconds with a single trigger pull. So if you are a civilian, your goal should be to fire the taser and then escape to safety.

Pepper spray is probably my second favorite tool to carry with me (behind a firearm) because of its effectiveness. I’ve witnessed the deployment of pepper spray to a narydoweill’s face and I can tell you that hellish liquid quickly changes peoples’ minds. I had an experience with one guy who had assaulted half a dozen people and said he was going to do a lot of bad stuff to us as we showed up on scene. He immediately started fighting us until one short blast of pepper spray quickly ended the struggle. The next words he yelled were “sorry guys, I’m done!” And this guy had been amped, angry, and violent. A quick blast de-escalated the situation before it ever needed to go any further.

Unlike a taser, once you get hit with pepper spray you are out of the fight for a while. The goal in a violent situation is to de-escalate as quickly as possible without getting hurt so you can get to safety. Pepper spray is a great tool for this. Furthermore, because it stains the perpetrator’s skin when sprayed, it is then easy for law enforcement to identify who the perpetrator actually was.

The only downside to pepper spray is that it is just as dangerous to the person spraying it as to the person being sprayed. If it is a windy day and you use pepper spray, then you are that person rolling around on the ground rubbing their eyes. There is also the possibility of overspray or blowback. Overspray may cause you to miss the person you intend to hit and spray another instead. Blowback occurs if you spray someone from too close a distance and the chemical “splashes” back into your face. As long as you consider your surroundings and weather conditions before using pepper spray, then I think it is an incredible addition to any personal defense arsenal.

A PepperBall gun is one of the less-lethal weapons for self-defense that you will most often see being used by law enforcement or military personnel. However, PepperBall does make civilian models, too.

A PepperBall is a specialized weapon that fires projectiles filled with rage and anger. The “gun” portion is called a launcher and it can propel the projectiles up to 150 feet. Additionally, once the projectile strikes its target (or near its target) it can saturate an area of approximately 50 meters, further repelling an attack or dividing an angry mob. Anyone who saw the riots in Ferguson or Baltimore likely saw these weapons utilized dozens of times.

PepperBall launchers come in a variety of options, from those that resemble traditional paintball guns, to those that look like a standard pistol, to one named the PepperBall VKS that resembles an AR-15 platform. The PepperBall VKS can fire projectiles up to 150 feet at 20 projectiles per second, and it has a 180-round hopper option that can be utilized if desired. In other words, this machine can clear a room or a city block quickly. 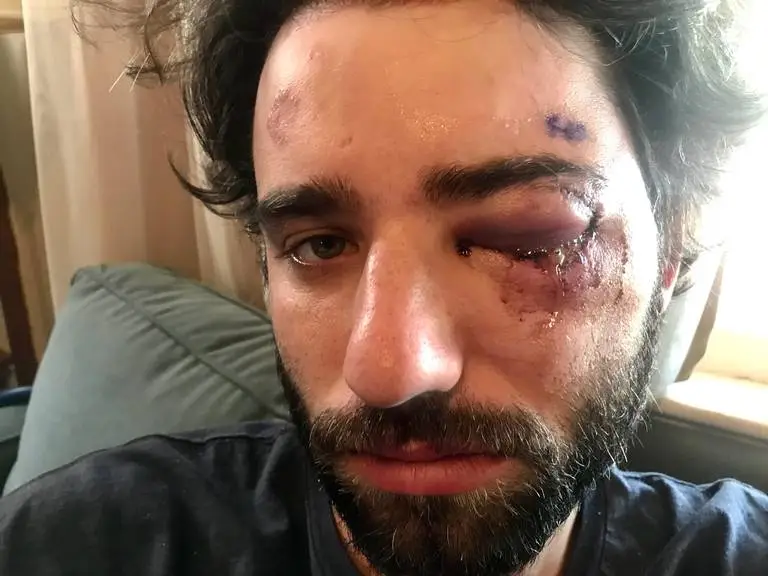 Beanbag rounds are typically compact “pillows” (known as beanbags) that contain lead shot. Typically these beanbags are fired from a 12-gauge shotgun, but I’m sure other gauges would be adequate as well. Both the beanbag round and rubber bullet are designed to not penetrate the perpetrator, but that doesn’t mean they can’t be devastatingly painful and deadly. Additionally, hitting someone in the groin or the face could potentially have lethal results.

Because these rubber bullets and beanbag rounds are more lethal than the other weapons on this list, special precaution needs to be taken before they are used.

The last of the less-lethal weapons for self-defense that I’ll discuss is the BolaWrap.

The BolaWrap is a device that at first glance looks a bit like a variation on a common taser. However, when it is discharged it shoots out an eight feet Kevlar tether that quickly wraps the assailant up preventing their escape. I know this sounds like some Spiderman technology, but the times I’ve seen it tested it has worked quite well. After all, it is awfully difficult to run or fight while your arms and/or legs are bound.

According to the website bluesheepdog.com, the BolaWrap has a laser used for aiming, its tether can reach speeds of 380 fps, has an effective range of 10-25 feet. Two fish hooks at the ends of the tether ensure it secures to the person once wrapped.

This device could obviously be used by law enforcement to ensure the quick and safe arrest of a violent suspect. It could also be used by a homeowner in the event of a home invasion if the homeowner is looking for a less-lethal self-defense option than a 12-gauge.

Knowing How and When to Throw Hands (or to NOT)

Honestly, I think the best tool that one can have is a keen sense of how to protect oneself against physical aggression. After all, you might’ve left your firearm on the nightstand as you are accosted while mowing your grass. Or, perhaps you forgot your pepper spray in the car as you quickly ran into the gas station for a soda. The one item you always have at your disposal — assuming you possess it — is your fighting acumen.

Knowing how to defend yourself against one or more assailants while also knowing when to run away is the most important skill to possess. You have to be in good enough physical condition to be able to act on your knowledge. You could be Bruce Lee in the skills department but if you look more like Lee’s chicken in the physical department, then your skills won’t mean a whole lot. Knowledge plus conditioning equals a fighting chance for you to survive a violent encounter while unarmed.

The last thing I’d like to say about less-lethal weapons for self-defense and why I believe that they’re better than even firearms in some instances is that you can utilize them and escape a lot in the way of further liability.

No matter the situation, if you shoot someone with an actual bullet, then you have questions to answer and possible lawsuits headed your way. You could potentially, however, deploy pepper spray on an aggressive person or you could tase them without much follow-up back-end drama. Should you make a report to the police in the event that you pepper spray someone acting violently toward you? Yes, you probably should. Will the police search for you day in and day out if you don’t? Unless you live in Mayberry, then the answer is probably no. Don’t mistake that to mean that you can drive around haphazardly spraying random people without repercussion, but consider the back-end of the situation in which you were involved and the aftermath you’ll have to deal with when discharging a firearm. I’m not at all saying don’t use that gun if you have to, I just want you to also consider the legal repercussions you may face.

If you happen to have any experience with any of these tools then let me know in the comments below. While I didn’t even scratch the surface of the less-lethal self-defense weapons available for purchase nowadays, hopefully, you gained a bit of knowledge that could assist in a purchase if that’s the direction you choose to go.

*Matt is a Marine veteran, a husband and a dad. He has worked in private security and served for a number of years as a teacher and a police officer in a midwestern suburb. Matt earned a Communications degree with an emphasis in Journalism and an English teaching certification.