You are at Home Gear The Advantages of Biometric Gun Safes

The Advantages of Biometric Gun Safes 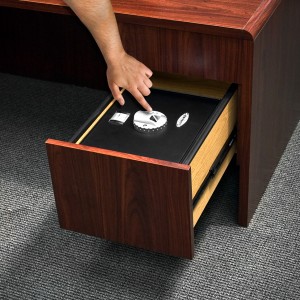 Gun safety has become a huge issue in today’s day and age. The times are gone when a parent can simply put a gun in the cabinet and trust that children will not choose to play with it. Gun safes have become the main force in preventing firearm accidents. These safes are made to keep anyone who isn’t supposed to touch the gun from doing so. Gun safes are often opened with a key, combination, or punch code, but innovations are being made almost continuously. The newest front in the fight to stop firearm accidents is the biometric safe, and it is looking promising.

Biometric gun safes are just like any other safe on the market except that they are opened by fingerprint recognition. Manufacturers realize that a gun owner may want their gun to be accessible to more than just them in case of an emergency, so legitimate manufacturers program the safe to recognize more than one set of fingerprints. These safes ensure that children, intruders, and anyone else whose fingerprint isn’t in the safe cannot gain access to the gun even by accident.

There are several biometric gun safes currently on the market. The GunVault line of safes has received several positive reviews from customers. There are some gun safes on the market that can be easily accessed; In fact there are videos online of people popping safes open by just knocking the face off of the unit. GunVault safes are not like these units. Many of their safes are made from 16-guage steel and are powered by a 9V battery. Even if this battery goes dead, the safe can be opened manually by a provided key.

Another biometric safe that has received rave reviews is the Barska safe. This safe runs on four AA batteries and also has the ability to be manually opened with a key. The safe has two steel bolts which protect firearms. The dimensions of the safe are also small, thus ensuring the safe is easily concealable.

The Advantages of Biometric

There are several advantages to owning a biometric gun safe. The main selling point on these safes is that a person can never lose their fingerprint, or forget it like they can a key or code. One selling point that prompts many gun owners to opt for the biometric safe is the fact that even in an emergency, the safe is easily accessible. During a crisis a person does not want to fumble for a key or have to stay calm enough to punch in a code. Biometric safes usually only require the press of a button and a quick fingerprint read to be opened.

Another great feature of biometric safes, as mentioned before, is the fact that they are capable of storing more than one fingerprint. A gun owner may want their wife to have access to a gun in case of a break-in, but not allow their 5 year old to gain access. Biometric safes ensure that if an approved gun user needs access to a weapon, they have it.

With any product on the market there are of course some negatives. Some older model safes can do a false scan which will open for the wrong fingerprint. Newer models have mostly ended this problem, but it is possible with older models. Sometimes safes will not open for correct fingerprints, but this is often caused by trying to open the safe with dirty or wet fingers, so it’s important to wipe away any grime or moisture that may be present on fingertips.

Overall, Biometric is a Great Option

While every new technology has certain kinks that need to be worked out, the biometric gun safe seems to be a great option in securing firearms. Most of the safes hold more than just one gun and are easily accessible in case of an emergency. While gun safes will most likely continue to evolve over the years, this particular type of safe is sure to be around for a while. When choosing a gun safe that combines quality, durability, safety and quick access, biometric gun safes are not a bad direction to go in.

This article is provided by Gun Safe Store, your source for securing your guns and firearms. Check out their full line of biometric safes as well as other rifle and handgun safes today.