The Legacy and Lineage of Larry Dean Olsen

Foreword and Photos by Christopher Nyerges

[Nyerges has been an author and teacher of ethnobotany and survival skills since 1974.  This new book is available at www.SchoolofSelf-Reliance.com]

The Legacy and Lineage of Larry Dean Olsen

Anyone who has been teaching outdoor survival skills for any length of time has undoubtedly heard of Larry Dean Olsen.  He was born in 1939 near Jerome, Idaho.  After Olsen graduated from Brigham Young University, he began teaching survival field trips through the college’s Continuing Education Division in 1968, sharing his love for the outdoors, and his intense interest in the skills of the local indigenous peoples.

At the time, there were scant few others teaching the skills that sustained indigenous peoples for millenia.  As a Mormon, Olsen was devoted to always being ready, including being able to survive in a harsh wilderness.  In addition, there were very few native peoples teaching the old ways of plant uses, flint knapping, trapping, and fire-making because most were too occupied just trying to stay alive in the modern world.

As part of his outdoor training, he would take students into the desert of the Great Basin area and live off the land for a week or longer. They had to learn how to eat wild plants, trap small game, make fire with local materials, build a shelter, weave sandals, find water, and more. It was a grueling adventure. 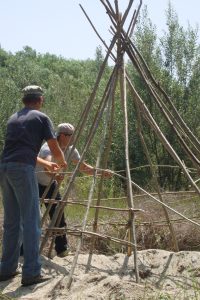 He wrote “Outdoor Survival Skills,” first published in 1967, which described all the survival skills he’d been teaching. His book has long been considered the definitive classic book on the subject.  The book has been updated every few years and remained in print all these years.

Larry was the originator of the Rabbit Stick Rendezvous, a gathering for a week where people could camp out and learn the skills in a more leisurely manner.  The event – and various knock-offs — continues to this day, continued by students of his.  His students began the Boulder Outdoor Survival School, and Larry continued to work at the Anasazi organization, which he co-founded, which gave guidance to youth in the wilderness.

Larry was perhaps the most visible person teaching and sharing the extreme art of living off the land.  It is not an overstatement to say that everyone today teaching these skills has some lineage, direct or indirect, that leads back to Larry Dean Olsen.

I remember when I first found a copy of the original edition in my older brother’s things. He was a camp counselor and thought the information would help him.  I took the book and studied it, and it became a part of my life as I pursued learning  outdoor survival skills and the uses of the many plants that the indigenous peoples used.

Olsen’s book became my “bible” of a sort – the key to the actual application of every skill needed to stay alive without the assistance of civilization.  I was amazed that such a compact resource even existed.  I began to practice making fire with the bow and drill because of this book, and I learned the process of weaving sandals from cattail leaves.  I also started making primitive weapons and traps, and I began the dangerous path of flint-knapping, which is the art of flaking a piece of obsidian or other hard material to produce razor-sharp arrow heads and spear points.  It’s dangerous because if you don’t do it right, you take off pieces of skin, as I did too many times.

My school friend Nathaniel and I often practiced the skills together.  We had heard about the budding Rabbit Stick Rendezvous, and wanted to attend a session in Utah. But for us, in high school at the time, getting the money together and traveling there was insurmountable for us.  As I recall, the cost for the week was something like $70, but it might as well have been a million dollars for us.

Still, Larry was like an idol to us, you could say he was our cult leader in our secret wilderness sect.  We worshipped him from afar.  No, we had no golden idol, but we invoked his name at nearly every occasion.

Over the years, I would quote   Larry in the many books and newspaper articles I wrote.  Eventually, around 2004, I became the editor of the Wilderness Way magazine, and called upon Larry for some advice, and to write for us.  We talked on the phone, and shared e-mails.  I never got him to write for us, but I did get lots of good advice.  I never managed to get to the gathering that he started either, though I followed many of his journeys and adventures from afar by reading reports from other students.

I was saddened when I heard that this gentle giant died in 2019.  I had always wanted to meet him, and to learn at his feet.  At about that time, I was asked if I could update Larry’s classic book! What an honor it was to be a part of the Olsen lineage.  I spent many months lightly editing the text, and adding some charts and short paragraphs where I felt it would enhance what Larry wanted to say. 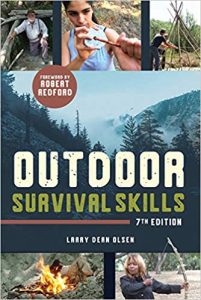 The hard part of the revision was to provide all new color photos for all the skills listed in the book, including new photos for the various wild plants described for food, medicine, and other uses.  Though I have been teaching for over 40 years, I was only able to draw upon my last nearly 20 years of photography with a digital camera.  Whereas the original black and white photos had the feeling of going on one long trip with Larry, my pictures were picked from many classes over a long period of time, with men, women, children, and people of all walks of life. In many cased, we had to go into the field to take brand new photos of certain skills or crafts.

The result is the 7th edition of “Outdoor Survival Skills,” a book I am proud to be a part of.  I hope that the memory of Larry Dean Olsen lives on, and that the introduction of new photos in a revised book will continue to inspire a whole new generation to learn these most fundamental skills.