You are at Home Prepping WILD MEDICINES 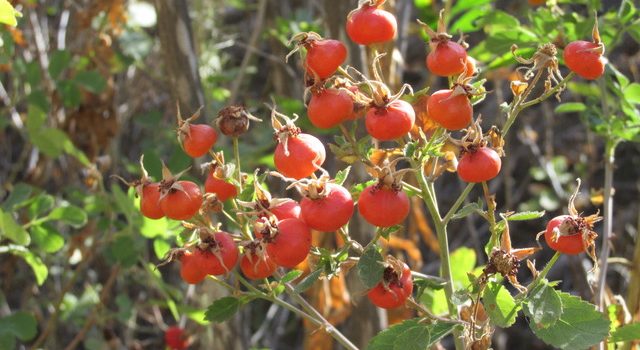 [Nyerges has been leading ethnobotany classes for over 40 years.  He is the author of “Guide to Wild Foods and Useful Plants,” “Foraging Wild Edible Plants of North American,” and other books.  He can be reached at www.SchoolofSelf-Reliance.com, or Box 41834, Eagle Rock, CA 90041.]

In general, an amazing variety of edible and medicinal wild plants can be found in urban areas and in the wilderness,  but you need to know where and when to look.  Plus you need to be able to accurately identify these plants.

Today, let’s look at a few of the most common wild medicinal plants, most of which are probably growing near you right now. 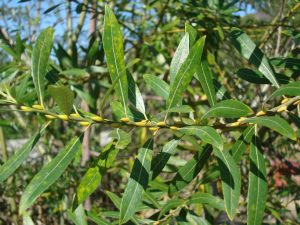 Willow trees are found in wet areas around the world.  Though I often use  the wood for craft projects, it’s the bark that has long been used as a medicine.  The inner bark of willow contains salicin and is the original aspirin.  The bark of the younger shoots is strongest, and it is fairly easy to harvest.  When steeped in water, willow tea is good for headaches, fevers, and even hay fever.  Due to its strong antiseptic properties, the tea can also be used as a good mouthwash, or used externally on wounds.  A willow wash is said to work wonders on rheumatism sufferers.

Willow plants are somewhat diverse in appearance.  Some are small and bushy, and others are tall trees.  Their leaves are nearly all thin and lance-shaped, and the plant is always found along streams.  I have seen them at sea level and higher than 8,000 feet.  They are found throughout North America. 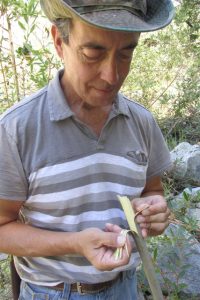 According to Dr. James Adams, author of “Healing with Medicinal Plants of the West,”  a tea is made from the bark which is drunk for fevers, colds, sore throat, headaches, pains and malaria.  The bark can also be chewed for a toothache.  The willow was one of the important medicinal plants of the Western Indians.  The bark was also crushed into a poultice and applied directly to the skin to relieve pain and reduce swelling.  How does willow work medicinally?  According to Adams, “Willow contains natural salicylates such as salicin, salicortin, tremulacin, populin, and others. Salicin is converted by intestinal flora  to saligenin that is oxidized in the liver to salicylic acid.  Willow bark can contain up to 10% salicin.”  Aspirin was originally produced from willow bark, and its active ingredient is salicin. 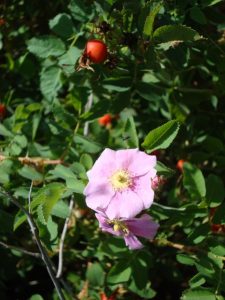 Roses grow everywhere, in the wild and in just about everyone’s yard, porch, or balcony.  And if you’re going to grow roses, you should also learn how to use them for food and medicine.

Rose petals and rose fruits (the “hips”) are both vitamin C rich foods, which are readily made into jams and jellies for winter use when fresh fruits might not be available.   You know you need vitamin C in your diet, right? 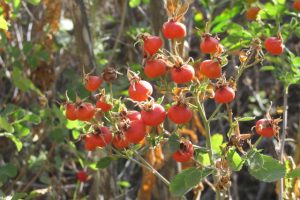 Petals can be added to salads, soups, omelettes, drinks, etc.  The fruits should be cut in half and the fibrous seeds scraped out. Then they can be made into various dessert items or tea.

Though the Aloe vera plant is known my many people, any of the aloes can be used for healing. This is a common yard and house plant, a succulent with pointy-leaves measuring a foot long or so.  Sometimes you find aloes growing wild, especially around old homesteads.

The fresh gel from any of the Aloe plants is used for such conditions as sun burn, burns from hot oil,  skin sores, diaper rash, bed sores, even poison oak rash.  Today, aloe is commonly called a miracle herb after all the research that has been done on it. 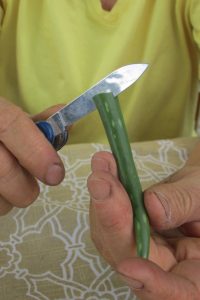 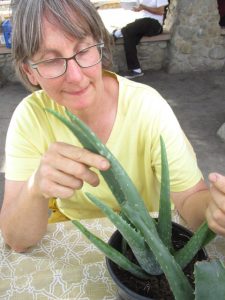 The properties of aloe are a broad mix of antibiotic, astringent, pain inhibitor, emollient, moisturizer, antipruritic (reduces itching), as well as a nutrient. 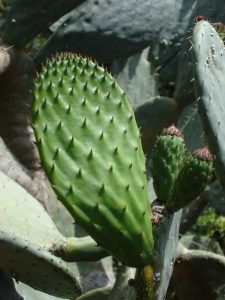 Generally, all of the oval-padded cacti of the Opuntia genus are called “prickly pears.”  It has been used in Mexico for centuries as a food and medicine.  The pads, once cleaned of their spines, are eaten raw, or as a green juice, but more commonly are sautéed with eggs or potatoes.  These are cooked in a broad variety of dishes.

Eating cactus pads has been used to improve diabetics (adult onset diabetes), just by eating the pads in any of the dishes. This is a case where you can eat your medicine.  Some of the research on this plant for curing diabetes, and lowering cholesterol levels, has been documented by Ran Knishinsky in his “Prickly Pear Cactus Medicine” book.  In fact, today you can even buy pills made from the dried cactus if you dislike eating it. 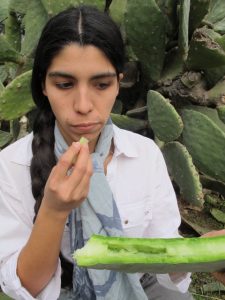 The ripened fruits, once cleaned of their many tiny glochids, can also be peeled and eaten, and is one of the closest things to watermelon that you’ll ever find in the wild.  These fruits have been shown to cure urinary infections. 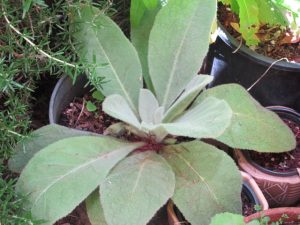 Mullein is a European native that can now be found throughout much of North America. The plant produces large light green leaves that are covered in fine hairs. When you touch the leaves, it feels like flannel!  In the first year, a large rosette of these leaves are produced, and then it dies back in the fall. In its second (and final) year, it sends up a towering flower spike with small yellow flowers. I’ve seen them seven feet tall, though four to five feet is probably more average.

The plant can be found in the sandy areas around rivers, in farm fields, along the road, and in both wet and dry environments.  Once planted in your urban yard, it will reseed and grow again year after year.

The first year leaves are ideal for medicine, but the older leaves can be used as well. An infusion of the leaves is made and drunk for upper respiratory problems, as well as minor asthmatic problems. The leaves have also commonly been smoked when there is the need, and even though it seems very anti-intuitive to smoke something when you have a breathing issue, I can attest that it does work.   Use of the mullein in a medicinal tea grew very popular during the Pandemic.

Besides being a medicinal plant, the leaves make good pot holders, toilet paper, and even wicks for slush lamps. 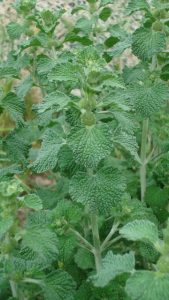 Wild mint is found along streams throughout North America.  When I am hiking or camping, I enjoy making a hot tea from these sweetly-fragrant leaves.  Besides being a breath-freshener, the mint tea is effective for stomach aches, and even cases of mild food poisoning.

Various cultivated mints are also widely planted in backyard urban gardens, and they often grow like weeds, spreading and spreading.  Peppermint, spearmint, and others are easily recognized by their unique aroma.

One of the mints, horehound, is a non-aromatic mint that is very bitter.  It has long been used as a cough medicine.  Simply make an infusion from the fresh leaves, and drink it –ideally sweetened with honey. 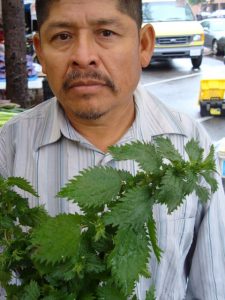 Nettle is a common wild plant throughout the world and it is generally a very under-rated herb.

I’ve eaten the greens like spinach for decades, and enjoy it.  But once I heard about using an infusion of the nettle leaves (dried or fresh) for allergy, I’ve starting drinking it pretty regularly in the evenings.  It has helped to relieve congestion and improve my ability to breathe.  It seems  to work even better than my old standby, Mormon tea.

There is nearly always a rich supply of nettle greens in the spring, and property owners have always allowed me to pick the nettles growing on their land.

Nutritionally, nettles is a good source of Vitamin C and A.  According to the USDA’s Composition of Foods, 100 grams of nettle contains 6,500 I.U. of Vitamin A, and 76 mg. of Vitamin C.  Herbalist Michael Moore, author of Medicinal Plants of the Mountain West, describes nettles as a diuretic and astringent, and he advices the tea for use in cases of internal bleeding.

It is probably common knowledge that nettles provided food for Europeans during WWII when normal food supplies were not there.  Nettles grew everywhere and many good recipes were developed during that era. 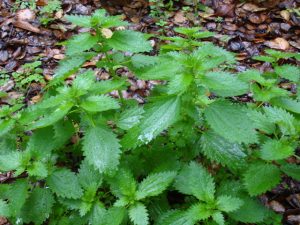 Caution: Also called “stinging nettles” because the hairs contain formic acid, and sting your skin on contact. Be careful when you collect, and wear gloves.

ALL PHOTOS BY CHRISTOPHER NYERGES UNLESS OTHERWISE INDICATED