With numerous shooters absolutely loving the VP series of handguns from HK, (that were mirrored closely after the P30 series pistols), it was only a matter of time that HK would release the subcompact model, the VP9SK. I personally love the VP9 series of pistols. At the 2017 NRA Annual Meeting in April 2017, HK finally released the VP9SK for the American Market. The teasers leading up to the unveil made the HK lover’s out there wanting more! My LGS, Clayton Guns, recently got one of these pistols in-stock and I was absolutely salivating over it. The ergonomics of the VP series pistols feel fantastic and I love the fact that these “Compact Size” pistols are selling for under $600 locally, so I was hoping the subcompact version would feel just as good.

Recently, we reviewed the HK P30SK, and I absolutely fell in love with that pistol – the fact that it was affordable, ergonomic, has the HK reliability, and easily concealable, made me want one. So I was really eager to get my hands on the new VP9SK to see what it’s going to be about. Looking at the teaser pictures of the VP9SK, it looked like it was going to be along the same lines as the P30SK, and it is – for the most part.

According to the HK website, the “VPSK pistols are made in Heckler & Koch’s Oberndorf factory in southwest Germany and are well suited for civilian sport shooting, security, military, and law enforcement use.” The VP9SK is being offered in two different variants: Standard Model (MSRP- $719) and LE Model (MSRP- $819). The Standard model includes one (1) 10rd flat floor plate magazine, one (1) 10rd extended magazine and HK Luminescent Sights, while the LE model will include one (1) 10rd flat floor plate and two (2) 10rd extended magazines and includes Tritium Night Sights.

The main thing that I really love about these pistols are the interchangeable backstraps, lateral grip panels, and ambidextrous controls. Like the P30SK, this pistol can really be made to fit you. Just like Glocks and the Sig Sauer P320’s (can accept the larger magazines out of the compact and full-size variants), the HK VP9SK will take the 15rd magazines that come with the standard VP9. 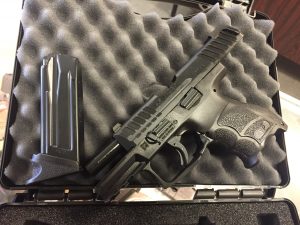 Holding this pistol, it feels really good with the extended magazine. With the flat based magazine inserted into the pistol, my pinky finger curls under the magazine. Like the P30SK, the VP9SK comes with the molded finger grooves in the front of the pistol’s grip – either you’ll like it or you won’t. I myself, don’t mind grooves – but then again, I wear medium size gloves. The trigger is clean and crisp and the reset is nice. The VP9SK offers a smaller picatinny 1913 rail molded into the polymer frame for mounting any of your lights and accessories.

This particular model we’re reviewing is the LE Model. With the machined steel slide and cold hammer forged steel barrel, the overall weight isn’t bad at all and balances very well. Comparing the P30SK and the VP9SK side by side, you’ll notice that the VP9SK is longer and taller. In a market that’s flooded with smaller subcompact models, how will this one stack up against them? Honestly, in my opinion, this pistol needs the extended magazine in at all time. With the extended magazine in, you aren’t getting any extra rounds – which absolutely sucks. I wish HK would listen to the general public and give the shooter the extra one or two rounds that we are wanting with an extended magazine (like :cough: Glock :cough:).

The VP9SK is being sold locally for $589.99 for the standard and $669.99 for the LE Model. According to HK, they will be releasing a 13rd and 15rd extended magazine for this pistol by November 2017. At the time of this article, May 2017, I haven’t really found any holsters available for the VP9SK. I did find a local NC company called Dara Holsters that are now offering the VP9SK as an option from them. If you are in the market for a new subcompact pistol, then check out the VP9SK and see if it’s right for you. Below is a chart comparing the more common 9mm double-stack subcompact striker-fire models against the new HK VP9SK.