You are at Home Gear T-Rex Arms AC1 (Uno) Plate Carrier- Is It GTG or a Hard Pass?

T-Rex Arms AC1 (Uno) Plate Carrier- Is It GTG or a Hard Pass?

Body Armor and Plate Carriers have been a hot commodity since the start of the 2020 Election Cycle. Average citizens wanted protection, especially with all the riots and civil unrest that has plagued the US since about the time of George Floyd’s death.

Fast-forward to August 30, 2021, they had the AC-Uno’s available again. I was able to snag one of their Wolf Grey version and it arrived on that Friday. Opening up the box, I was excited to see what the hoopla is all about with this plate carrier. On their website, it recommend that the 10×12 plates to be used should not exceed 1.05″ thickness. I found out quickly that the LAPG 10×12 Level IV plates are a bit thicker (1.125″ thick). I was able to shove them in the carrier, but it was a very tight fit. Although they did fit, I would not recommend those plates at all for this carrier.

Luckily, I had a set of Level III RTS Tactical plates laying around, so I placed them in there with ease and I was good to go. The ease of adjustment was spot on for this carrier. T-Rex Arms offers a video showing how to properly size your carrier. If you are new to plate carriers, I would recommend watching it first. The cummerbund has enough real estate that it will fit around my 52″ chest. I will say that this plate carrier is designed to be around the 32″ – 48″ chest. It is advertised for 32″ – 58″. The shoulder straps have a nice shoulder pad that adds some slight comfort, but it is still a bit jagged on the sides that is close to your neck due to the elastic. 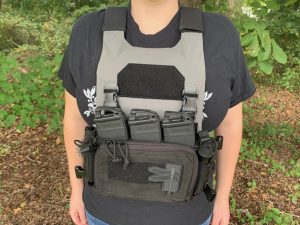 The front and rear of the carrier have a nice hook and loop area to place your favorite patches, unit insignia, or your designated Identifying Patch (Sheriff, EMS, FIRE/RESCUE, etc). One good selling point that I liked was the fact that it has the 1″ QASM Buckles already installed to attach a placard. Placing the Haley Strategic D3CRM on the front was a breeze. Attaching a MOLLE Placard on the front and adding your favorite magazines like an Esstac KYWI or G-Code Soft Shell Scorpion would be your best bet if you’re wanting that custom placard set-up. 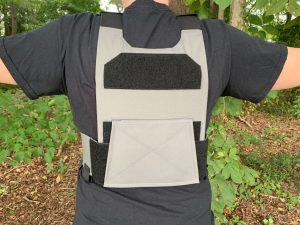 I wanted to see how this carrier would fit with my wife. She tried it on and she had the same conclusion that I did. You could feel the plates digging into the side of your back and chest. Also, the straps put a lot of tension on the traps and the shoulders/neck. According to others, this is a common problem and T-Rex Arms states that the plate carrier will “even out” and start to “sag” and sit more “naturally” over time. For me, this makes me not want to wear this carrier and she felt the same way.

T-Rex Arms sells a plate backer pad set that goes behind the plate to give you some padding on the body. There isn’t any padding for the chest and back making this plate carrier, really a more minimalist plate carrier. Adding those pads, it adds some extra comfort on those long days. 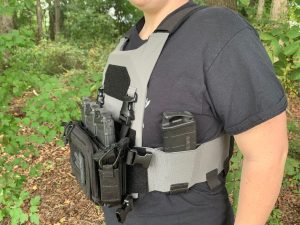 Overall, is the T-Rex Arms Plate Carrier worth the price? For the $140 that I paid for the AC-Uno, I think it would be a good minimalist plate carrier to keep in the truck for an active shooter situation. With the addition of the plate backer pad with some hard armor plates, or even the Level IV Ceramics with the plate backer pad it makes for a good buy. For an all day, out in the field plate carrier? Although the carrier was designed as a minimalist carrier/conceal plate carrier, I feel like it would work in the field. The cummerbund in itself has three elastic pockets on each side to add extra mags, radio, etc. This added feature is nice. But in reality, the most rearward slot is just in a weird spot, so honestly you have a total of four slots instead of six to add extra gear. And with the placard system design in mind, the mission set is endless. The overall finish on the carrier is nice and didn’t have any loose threads that needed to be burned down. So even though these carriers were manufactured in Mexico, the quality is still there.

For the price tag of $190 for the AC-1, I would say if you are wanting a minimalist style plate carrier then check this one out. Just be mindful that you will have to “wear it in” some to get those shoulders straps to set properly on your trap muscles/neck area.

For someone wanting to add some extra protection to with a nice form of concealability, then check out the T-Rex Arms AC1 and see if it’s right for you.