With the success of the Trijicon MRO (Miniature Rifle Optic) launching in 2015, why did Trijicon feel the need to bring about the MRO Patrol out in 2017? Well, the factory added accessories are really the only difference and a longer body. The MRO Patrol comes with flip-up covers on both the Ocular and Objective lenses, adds an ARD Kill Flash, and a quick detach mount. Is it really worth the extra money? Let’s take a deeper comparison between the MRO Patrol and the Trijicon MRO. 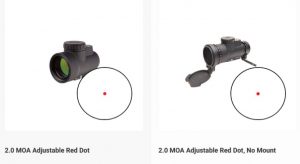 Here’s what Trijicon has to say about the MRO: The Trijicon Miniature Rifle Optic (MRO®) is a reflex-style, sealed sight intended for use on rifles, carbines, and shotguns to provide fast target acquisition. It is designed to be used with both eyes open, providing the operator with maximum situational awareness. The large aperture and tapered light path maximizes the viewing area in such a small optic, allowing for fast target engagement – especially from non-standard shooting positions. Advanced lens coatings and electronics produce a crisp red dot. The brightness control dial on the MRO is specifically designed for ambidextrous usage. With a mid-adjustment “off” position and eight discernible brightness settings, this brightness dial allows for quick and ergonomic adjustments. 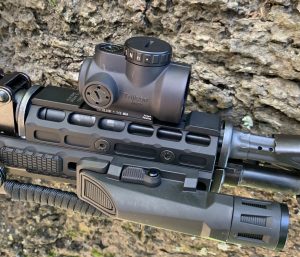 We tested out the Trijicon MRO on the finished 80% AK Lower from Tortort Manufacturing with Apex Gun Yugo Underfolder AK47 Parts Kit with the Midwest Industries AK Handguard cut out for the MRO. The Trijicon MRO Patrol was tested out on the Bravo Company pistol build using a Criterion Hybrid 12.5” Barrel. We tested these optics out on a 90deg F (felt like 97deg F) day with the humidity at 55% and 12mph W winds at ENC Firing Range.

When I look through the lens I do notice that it’s a 1x power magnification on both optics and I also notice the “blue” tint on both, even though Trijicon states that “blue” tint problem has been “fixed”. I have astigmatism in my eyes and honestly, this optic works great. I do not notice anything wrong with the 2.0 MOA dot at any of the brightness settings on both the MRO’s. With the ARD Kill Flash installed, it does make looking through the lens a tad bit dark and working in low-light conditions it isn’t all that great. But other than that, it’s fantastic during the day in the direct sunlight. I found that the brightness setting on the range, in direct sunlight, that I liked the most was the “5” and in low-light conditions I found that I liked setting “3” the best.

The original MRO can be found online at a very nice price point, less than $400. Even though it doesn’t come with the ARD Kill Flash or flip-up or mount, it’s still very competitive compared to the MRO Patrol. Aftermarket mounts can be found for around $80-$150 respectfully. Flip-up caps can be found for around $30-$50 and an ARD Kill Flash can be found around $80. The MRO Patrol can be found online for a little less than $600 with the 1/3rd Co-Witness quick detach mount. So if aren’t you needing the extra accessories and can get by with the factory non-quick detach 1/3rd mount version then get the MRO, or get one without the mounts and buy an aftermarket detach mount and you’ll still come out saving some coin.

Here are the Pros and Cons of the MRO Patrol over the MRO: 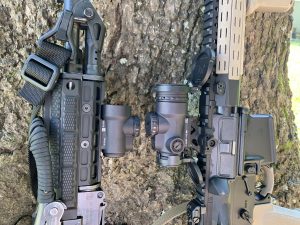 Mentioning before, the only real difference between the MRO and the MRO Patrol is the overall length, weight, flip-up covers, ARD Kill Flash, and the option for a quick detach mount.

If you are in the market to put a great optic on any of your rifles, carbines, or shotguns, then either the MRO or MRO Patrol will be great to have. They are both pretty much the same, with just a few slight differences. They are built like tanks and can take abuse while still holding zero. You won’t regret owning either one of these. For the conscientious buyer, then the original MRO would be the best option for you! For me, I like both of them, but I feel the original MRO is the best bang for your buck. Looking back when I built the 12.5″ BCM AR, I should’ve just purchased the MRO instead of the Patrol and got an aftermarket 1/3rd Co-Witness quick detach mount. I would’ve saved some money and still came out with a great optic. But at the end of the day, the choice is yours.